My View: The Life & Food Of Jacques Pepin – An Interview With The American Master at Gold Coast Int’l Film Festival

My View: The Life & Food Of Jacques Pepin – An Interview With The American Master at Gold Coast Int’l Film Festival

Festival Director Caroline Sorokoff had a conversation with world famous chef Jacques Pepin at the Gold Coast Arts Center before special preview screening of the PBS American Masters Documentary “The Art of Craft”  Although Caroline can’t cook like Julia Child she held her own with the culinary giant who has released 28 cookbooks and 13 companion PBS-TV series.  Mr. Pepin has received 16 James Beard Foundation Awards, including the Lifetime Achievement Award in 2005.  He is a former columnist for The New York Times with countless articles also appearing in Food & Wine Magazine and is the recipient of honorary doctorate degrees from five American Universities. A longtime close friend of Julia Child, he starred with her in the PBS series Julia and Jacques Cooking at Home which won both an Emmy Award and a James Beard Foundation Award.  Among his many other accomplishments, Pepin served as personal chef to three French heads of state, including Charles de Gaulle and from 1960 to 1970, he was director of research and new development for Howard Johnson’s and developed recipes for the restaurant chain.

Check out this video interview 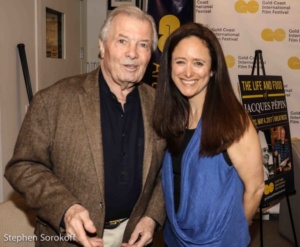 Suzanna BowlingJuly 8, 2020
Read More
Scroll for more
Tap
My View: Something Better Than Popcorn At This Screening – Jacques Pepin At Gold Coast Intl Film Festival
My View: Who Wrote Those Words?