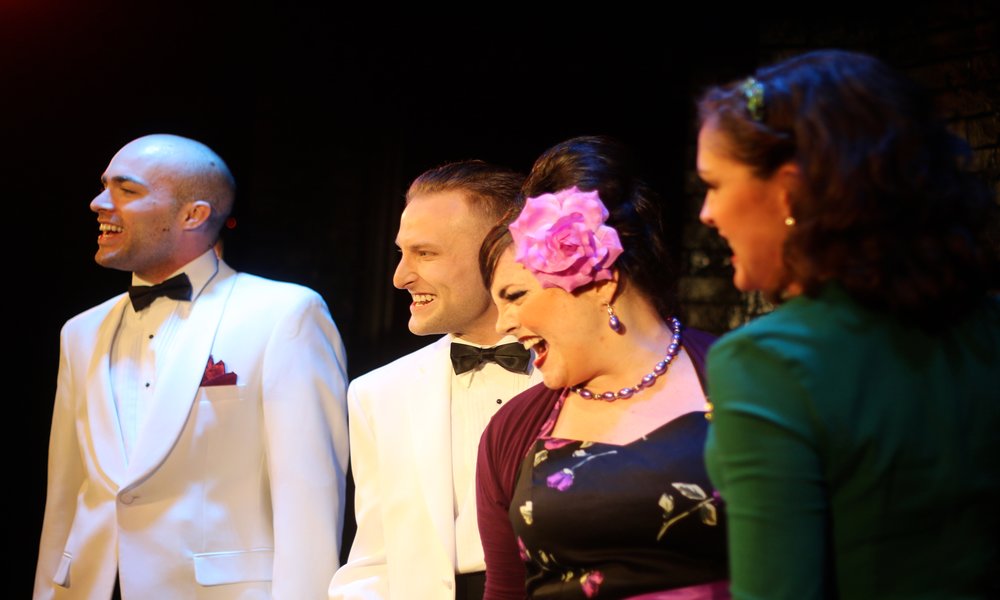 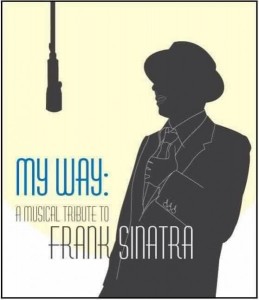 There is a bright new gem of a cabaret show now playing at the Theo Ubique Cabaret Theatre. A delightful tribute to The Chairman of the Board himself, My Way…A Musical Tribute to Franks Sinatra is a sophisticated break from the holiday fare currently entertaining throughout the Windy City in December.   Looking for the perfect gift for any fan of the Great American Songbook? Add tickets to this show to their stocking, but make certain to reserve a few for yourself. Directed by Fred Anzevino, this thoroughly enjoyable production is a rapid fire succession of over 40 hits in reverence to ‘Ol  Blue Eyes and the musical legacy he left behind. Originally conceived by Todd Olson and David Grapes, this cabaret originated in Los Angeles and has been performed throughout the country since. It is now Chicago’s turn to play host and you will be all the better for attending. From L.A Is My Lady to The Way You Look Tonight, My Way is a handsomely produced, feverishly paced, love letter to a style and an era gone by. 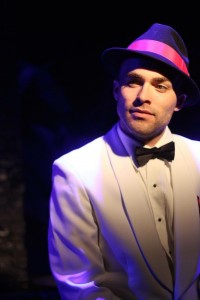 Whether a casual fan of the man himself, or an aficionado, there is something in My Way…A Musical Tribute to Franks Sinatra  for everyone to relish. Born in Hoboken, New Jersey on February 17, 1915,  Francis Albert Sinatra, transcended his humble beginnings to became an international icon. Wed four times, he had seven #1 singles throughout his illustrious music career. As an actor, Sinatra won the Academy Award for From Here to Eternity in 1953, but this cabaret showcase focuses exclusively on his 9 time Grammy Award winning songbook. Since we are discussing awards of note, Sinatra was also given the prestigious Presidential Medal of Freedom in 1985 and a Congressional Gold Medal in 1997. Dean Martin once famously said “This is Frank’s world. We just live in it.” I would be doing a disservice to all involved in the addictive fun of the show to name drop every song performed, but highlights included All of Me, The Best is Yet to Come, I Only Have Eyes For You, I’ve Got You Under My Skin, Makin’ Whoopee, (Theme from) New York, New York, My Funny Valentine,  One More For My Baby (And One More For The Road) and Strangers in the Night. 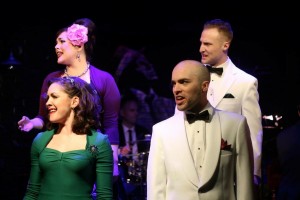 Fleshing out this cabaret, a quartet of Chicago’s finest. Kyrie Anderson, who I adored in the recent Theo Ubique Cabaret Theatre’s production of Blood Brothers, is simply put, elegance personified. It bares stating Anderson has more than a passing resemblance to one of Sinatra’s ex-wives, actress Eva Gardner. Her Irish catholic coloring, dark, Veronica Lake style wavy hair adorned with a glittering hair pin, and Kelly green dress  (spot on costume design by Bill Morey)all  scream 50’s pin up girl. Then there is that voice.  Soft, silky, sumptuous. Anderson’s rendition of On The Sunny Side of the Street and Love and Marriage, just dazzle.    Returning to Theo Ubique, dapper Christopher Logan, recently of The Boy From Oz, brought tuxedo clad sophistication and robust dance skills to the stage. His solos on I Get A Kick Out Of You and The Lady Is A Tramp, punctuated by crisp tap-dancing,  choreographed by Maggie Portman, soar. His rendition of Witchcraft, a pitch-perfect treat I could happily listen to on repeat for hours. Newcomer Carl Herzog brings his winning, toothy smile and gobs of Sinatra-esque swagger to the stage, below the signature fedora hat, perched atop his shaved head, effortlessly pronouncing, “This is Sinatra.” Herzog’s rendition of That’s Life is worth the price of admission. Each performer was given the opportunity to individually shine in solo numbers, then rejoined with the others in glorious four part harmonies. With that said, Herzog dominated. The final member of the foursome, Caitlin Boho, proved resolute within the group harmonies, however, her over-exaggerated facial expressions were both unnecessary and distracting during her solo numbers.  Theo Ubique Cabaret Theatre is such an intimate environment, Boho doesn’t need to “sell it” so hard when she is standing 4 feet in front of her audience. Her High Hopes was quite exquisite, just reel in the “shtick” a bit.  Musical Director Jeremy Ramey was completely winning on the piano, Kevin Brown proved classy on the drums and Jake Saleh charmed on the stand up bass. 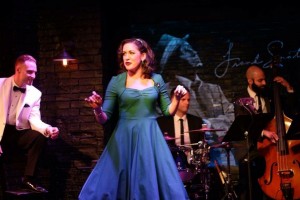 On top of the extraordinary music, written by such renowned talent as Cole Porter, Cy Coleman, Rogers and Hart and Jerome Kern, just to name a few, the show also sprinkled several anecdotes throughout about the legend that is Sinatra. We were told it is “estimated half of the population, over 40, was conceived to the music of Frank Sinatra.” When asked about the secret to Frank Sinatra’s success, he quipped “sing good songs.” My personal favorite, “You only live once. The way I live, once is enough.” Not surprising, the night I attended, My Kind Of Town inspired a spontaneous and enthusiastic, audience clap-a-long. While Sinatra the man passed away on May 12, 1998, his legacy on popular culture ever endures. Looking for some Old Black Magic from a man who did it his way, the highly engaging My Way…A Musical Tribute to Franks Sinatra is worth your time.  His final wish,  “May you live to be 100, and may the last voice you hear by mine.” Fly me to the moon indeed, Blue Eyes.