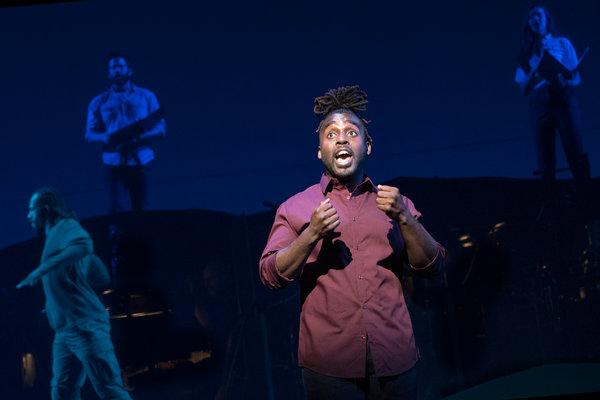 Ghostlight Records has announced the second single from Jason Robert Brown’s landmark musical Songs for a New World (New York City Center 2018 Encores! Off-Center Cast Recording). Customers who pre-order the digital album will immediately receive a download of “King of the World,” in addition to the previously-available first single, “Surabaya-Santa.”

The album will be released in streaming and digital formats, and a two-CD set on Friday, January 25. This is the show’s first recording since the world premiere album over 20 years ago. In the ensuing years, these songs have become staples of contemporary musical theater, including the modern standard “Stars and the Moon.” The CD package includes a 12-page booklet with production photos and a note from Jason Robert Brown. To pre-order the album, please visit: ghostlightrecords.lnk.to/songsforanewworld

The debut musical from three-time Tony Award winner Jason Robert Brown (Parade, The Bridges of Madison County), Songs for a New World (1995) is a collection of powerful songs examining life, love, and the choices ordinary people make when faced with extraordinary moments. From the deck of a 1492 Spanish sailing ship to the ledge of a Fifth Avenue high-rise, each character faces the new world which follows the unique challenge they encounter.

Songs for a New World was presented at City Center from June 27-30, 2018 and was hailed as “buoyant, restorative, and immensely winning” by The New York Times and “rapturous, beautiful, and awesome” by New York Stage Review. AM New York raved that it was “unexpectedly thrilling” and praised the cast’s “powerhouse vocals coupled with great acting choices.”

Jason Robert Brown  is a composer, lyricist, conductor, arranger, orchestrator, director and performer best known for his dazzling scores to several of the most renowned musicals of his generation. The New York Times refers to Jason as “a leading member of a new generation of composers who embody high hopes for the American musical.” Jason’s score for The Bridges of Madison County, a musical adapted with Marsha Norman from the bestselling novel, directed by Bartlett Sher and starring Kelli O’Hara and Steven Pasquale, received two Tony Awards (for Best Score and Orchestrations). A film version of his epochal Off-Broadway musical The Last Five Years was released in 2015, starring Anna Kendrick and Jeremy Jordan and directed by Richard LaGravenese. His major musicals as composer and lyricist include: 13, written with Robert Horn and Dan Elish, which began its life in Los Angeles in 2007 and opened on Broadway in 2008 (and was subsequently directed by the composer for its West End premiere in 2012); The Last Five Years, which was cited as one of Time Magazine’s 10 Best of 2001 and won Drama Desk Awards for Best Music and Best Lyrics; Parade, written with Alfred Uhry and directed by Harold Prince, which premiered at Lincoln Center Theatre in 1998, and subsequently won both the Drama Desk and New York Drama Critics’ Circle Awards for Best New Musical, as well as garnering Jason the Tony Award for Original Score; Honeymoon in Vegas, based on Andrew Bergman’s film, which opened on Broadway in 2015 following a triumphant production at Paper Mill Playhouse; and Songs for a New World, a theatrical song cycle directed by Daisy Prince, which played Off-Broadway in 1995, and has since been seen in hundreds of productions around the world. Parade was also the subject of a major revival directed by Rob Ashford, first at London’s Donmar Warehouse and then at the Mark Taper Forum in Los Angeles. Future projects include a new chamber musical created with Daisy Prince and Jonathan Marc Sherman called The Connector, an untitled new piece created with Kenneth Lin and Moisés Kaufman, and a new musical with Billy Crystal. Jason’s songs, including the cabaret standard “Stars and the Moon,” have been performed and recorded by Audra McDonald, Billy Porter, Betty Buckley, Karen Akers, Renée Fleming, Philip Quast, Jon Hendricks and many others. As a soloist or with his band The Caucasian Rhythm Kings, Jason has performed sold-out concerts around the world. www.jasonrobertbrown.com.

4. I’m Not Afraid of Anything

6. Transition: “A new world calls me in the darkness…”

7. Stars and the Moon

1. The World Was Dancing

4. King of the World

6. Transition: “A new world promised it would teach me…”