Naked Man Takes Yelling At Trump To A New Level

Naked Man Takes Yelling At Trump To A New Level 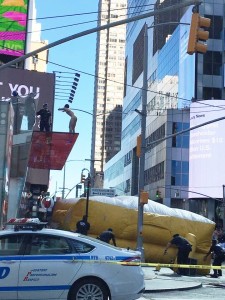 Time Square was in for a shock this morning as a 21- year old Asian fashion model and Columbia University student Krit McClean danced naked on the TKTS Discount Broadway Ticket Booth in Times Square. Baring it all, he spit at officers, grabbed his butt and genitals, made obscene gestures and pacing between officers and screamed about Donald Trump appeared injured after falling from a platform.

Officers from a hostage negotiation team first responded around 7:40 a.m. and discovered a combative and incoherent man on the TKTS Discount Broadway Ticket Booth’s stairs. At 8:50 a.m. that the man had been detained.

It took at least a dozen officers, patrol cruisers and FDNY officials who appeared at the scene. A large airbag was setup underneath the platform as the man was running back and forth before falling, just missing the airbag. He was transported to Bellevue where he was listed in stable condition and receiving a psych evaluation.