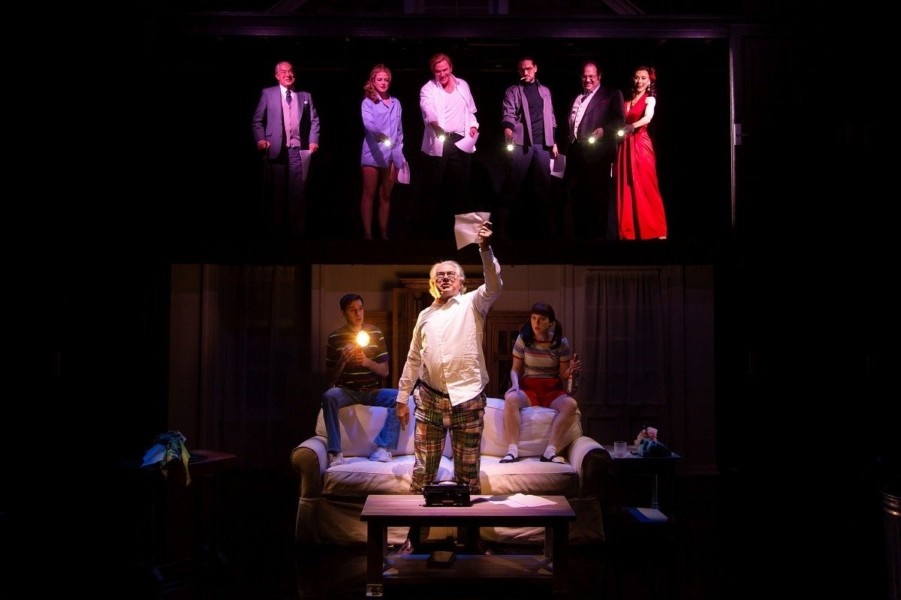 John Guare’s new play Nantucket Sleigh Ride is wonderfully directed by Jerry Zaks, with a dream cast that is lead by the ever talented John Larroquette. This play is so absurd that you will wonder who spiked the kool-aid and why weren’t you given any.

Larroquette plays Edmund Gowery. In his past Gowery wrote one play Internal Structure of Stars, that has become a clue in the New York Times crossword puzzle. He has put the artist behind, to become a man who admits, “I convince people to sell things they love to buy things they don’t want.”

When his past from 1975 comes back to haunt him in the form of Poe (Adam Chanler-Berat) and Lilac (Grace Rex), who have completely lost their memory of that summer, Gowery is brought back in time to when his lawyer (Jordan Gelber), advised him to buy an investment house in Nantucket. Gowery at the time was having an affair with his wife (Tina Benko) and has long blocked out that summer. He returns to that year when the whole country was engrossed in “Jaws”.

Gowery, becomes the shark (or in this case whale) that is hunted, as he is called to Nantucket. A Nantucket police officer (Stacy Sargeant) has accused him of running a child pornography ring out of said house. It also seems that the residents did a community theatre production of his play, and are miffed he did not attend. He meets McPhee (Will Swenson) who is having trouble with his 11-pound lobster. McPhee brings Gowery to his girlfriend Elise’s (Clea Alsip) house. Elsie is a community theatre’s actress and the daughter of a famous children’s writer, who he is having an affair with. Her husband, Schuyler (Douglas Sills), wants her to give the rights to her father’s books to Walt Disney, but Elise has a problem with the mouse house and it seems Schuyler has killed Elise.

Upon arriving at the house, he meets for the first time the rather weird children Poe and Lilac, who suddenly he can relate to because they have been abandoned just like he was as a child.

For some reason everyone is into Jorge Luis Borges (German Jaramillo) and he keeps popping up with antidotes.

Larroquette deadpan delivery is perfect for Guare’s humor and at times this play has lines that are rather hysterical.

The set by David Gallo, the costumes by Emily Rebholz, the lighting by Howell Binkly polished.

Zaks is clearly having a good time with this material and brings wonderful nuances from his perfect cast.

I just found this play too convoluted to grasp its symbolism. When Gowery announces maybe he did write another play, I have to scratch my head at that announcement. A play he did write, will it last….now that is another matter.