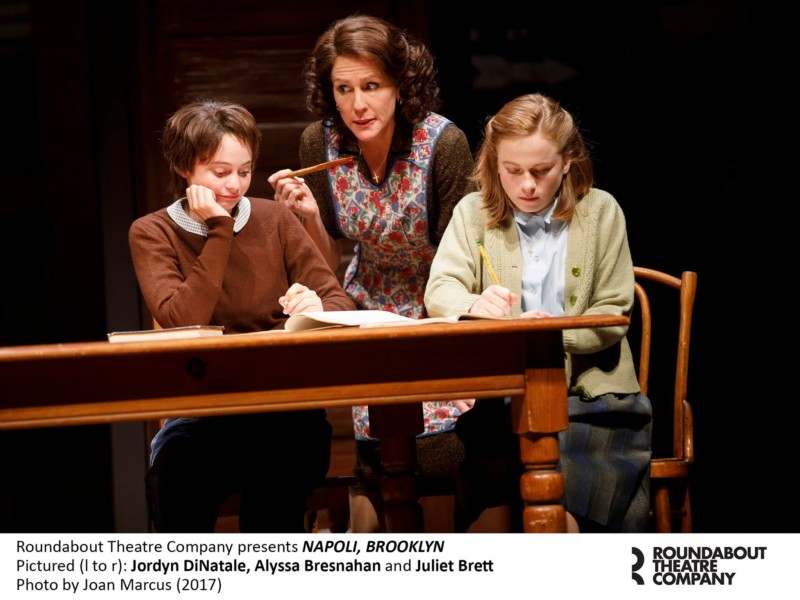 Napoli, Brooklyn: Where Freedom is Longed For

Napoli, Brooklyn: Where Freedom is Longed For 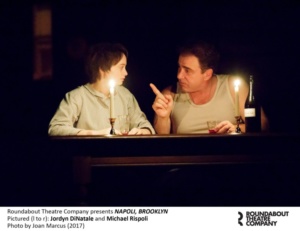 Meghan Kennedy’s Napoli, Brooklyn, in the Laura Pels Theatre at the Harold and Miriam Steinberg Center, is a sweet coming of age story set in 1960 Brooklyn. As you enter the theatre you can smell the bread. It’s like an Italian version of I Remember Mama. Luda’s (the terrific Alyssa Bresnahan) life is centered on feeding and keeping her family together, despite the fact that her husband Nick (Michael Rispoli) is an abusive brute. Her three daughters, each a rebel in their own way are her joy. 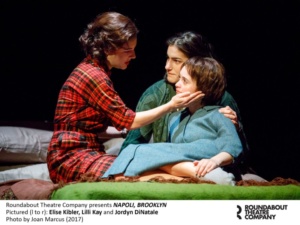 16-year-old Francesca (Jordyn DiNatale) shares a bed with her older sisters, until she decides to chop off her hair, which causes her father to want to kill her. Her 20-year-old sister Vita (Elise Kibler), steps in and has the crap beaten out of her. Sent to a convent for her protection, Vita longs to be free. Now Francesca shares the bed with her eldest sister Tina (Lili Kay), 26, who was denied an education to help support the family, and who works in a factory. Friendless and guilt ridden that it was Vita not her that protected Francesca, Tina converses with her black co-worker Celia (Shirine Babb) and come to see there is a life for her. 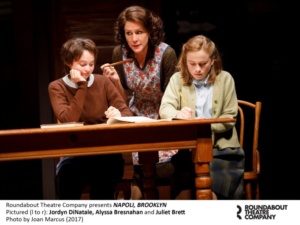 Francesca longs to travel to France to be with Connie (Juliet Brett) the neighborhood girl she loves. In the meantime, the Irish butcher (Erik Lochtefeld) is in love with Luda, who has stopped crying since Vita has been banished and carries around an onion to comfort herself. Everything collides as the tension bursts forth when a disaster crashes into their neighborhood just before Christmas. 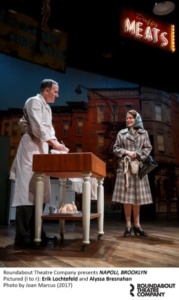 The cast is terrific, with Alyssa Bresnahan bringing to mind Pier Angeli, Gina Lollobrigida and Anna Magnani, as she passionately takes to the stage with smoldering realism and hints of a comedic bite. Michael Rispoli allows us to see the man who longs to be better, despite his brutality. There is beauty when Francesca and Connie find a way to express their feelings for each other. Each actor in their own way creates a three dimensional character. 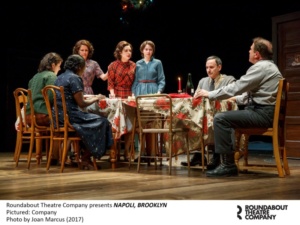 Ms Kennedy’s dialogue seems unrealistic at times, but has a lot of heart.

This stereotypic drama is also an intimate portrait of the immigrant working-class life, though it seems more like a Hallmark TV movie than a major Off-Broadway play.

Suzanna BowlingSeptember 11, 2022
Read More
Scroll for more
Tap
1984 An Assault On Your Senses
Meet the Playwrights of Summerfest: Jennifer Berman Is Bringing Houdini and Arthur Conan Doyle To Life