YouTube singing sensation and Broadway Performer, Natalie Weiss, took her act to the Green Room 42, before heading to London. The largely 20 something crowd was in her court all night as her powerhouse vocals contained some fabulous riffing, witty banter, pop hits, theatre classics and songs she is known for. What was missing, were the songs from the new theatre composers such as Scott Alan, Peter Mills and Ryan Scott Oliver, which in my opinion make her stand out.

The show was also fraught with several disasters such as starting a half an hour late. She missed lyrics, stopped and started material and she choked, literally which took another half hour out of her show and because of this, her audience did not get all of her set list. In researching, it seems she has a habit of this. This happened in Houston in 2014. She even used the same banter as she did in Houston with “usually, I don’t do this. Normally, I can’t talk by now”.  Also her video went down, which was legitimate.

When she was on target, her vocal performance was thrilling. Opening with a cover of Shawn Mendes “There’s Nothing Holding Me Back”, Natalie went into a rifted version of “Back To Before” from Ragtime, before another cover, this time of AJR’s “Weak.” Bringing on Addi McDaniel, the two sang a mash-up of “My Funny Valentine and “Cry Me A River”. “I’m Every Woman” and Natalie Imbruglia’s “Torn”, followed. Having played Molly in Ghost, we were treated to a soulful “With You”. Reading actual messages from her OkCupid inbox, “Secret Love Song Part II” by Little Mix followed. 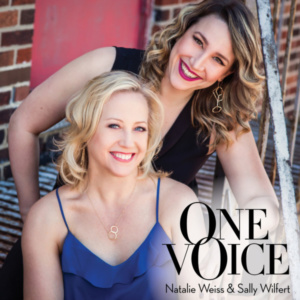 One of my favorite moments was when Sally Wilfert joined her to sing a mash-up of  “Spark of Creation” from Children of Eden and “Our Time” from Merrily We Roll Along this arrangement was captivating. This comes from a EP called One Voice which is on sale. This is a must for any theatre baby.

Singing from the hit musical Waitress, Sara Bareilles’s “She Used To Be Mine”, had me wanting to see Ms. Weiss take over the coveted role. Ms. Weiss shared from Broadwayworlds comment section. It seems people do not think she can act.

Demi Lovato’s “Heart Attack” mashed with Taylor Swift’s “I Knew You Were Trouble” was well done.

“I Go The Distance” from Disney’s Hercules finished the set.

Returning for a three song encore was another favorite moment. In a stripped down version “If I Loved You” from Carousel, the classic “All The Things You Are”, “Bill” from Showboat and “This is Me” from Disney’s Camp Rock complete with her vocal students, finished the evening in a wonderful way.

Ms. Weiss was backed by some powerhouse vocalists that consisted of Brittany Dorazio, Jake McKenna and Morgan Reilly.

As always lights by Daniel Dunlow, rocked the house.

I was seriously looking forward to this concert. I have been a fan, since seeing her perform with Scott Alan. I just hope Ms. Weiss conquers her professionalism to become the truly amazing performer she is.

Natalie will be back at The Green Room 42, 570 10th Ave, May 6th. She will have finished a series of concerts in Europe and should be well seasoned.

Suzanna BowlingJune 17, 2021
Read More
Scroll for more
Tap
The Edge of Our Bodies at the Edge of Our Seats
Curtain Call Opening Night of Children of a Lesser God