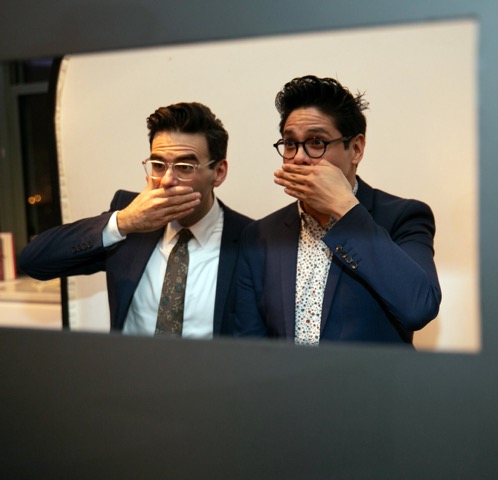 Suzanna Bowling
On November 5th, the National Coalition Against Censorship (NCAC) hosted its annual Free Speech Defender Awards at a benefit celebration in New York City, honoring Oskar Eustis, Artistic Director of The Public Theatre, and featuring a highly-anticipated performance from musical theater icons Joe Iconis and George Salazar of Be More Chill. The event was hosted by comedian Michael Ian Black.
David Henry Hwang and Oskar Eustis.  Photo courtesy of National Coalition Against Censorship
Oskar Eustis has served as the Artistic Director of The Public Theater since 2005. In the last three years, he has produced two Tony Award-winning Best Musicals (Fun Home and Hamilton), and back-to-back winners of the Pulitzer Prize for Drama, Hamilton and Sweat. At The Public, Eustis directed the New York premieres of Rinne Groff’s Compulsion and The Ruby Sunrise; Larry Wright’s The Human Scale; and most recently Julius Caesar at Shakespeare in the Park. He has founded numerous ground-breaking programs at the Public, from Public Works and Public Forum to the Emerging Writers Group.

Oskar Eustis.  Photo courtesy of National Coalition Against Censorship
In the summer of 2017, The Public’s production of Julius Caesar, featuring a Trump-like Caesar, drew ire from right-wing media, resulting in the withdrawal of two of the play’s largest corporate sponsors. NCAC honors Eustis for his dedication to artistic freedom, his fierce defense of the value of provocative art to democracy and his unwavering commitment to the free expression of his directors, playwrights, actors and entire the entire theatrical community.