National Theatre Streams the Famed Amadeus, Courtesy of Shaffer and the Infamous Salieri 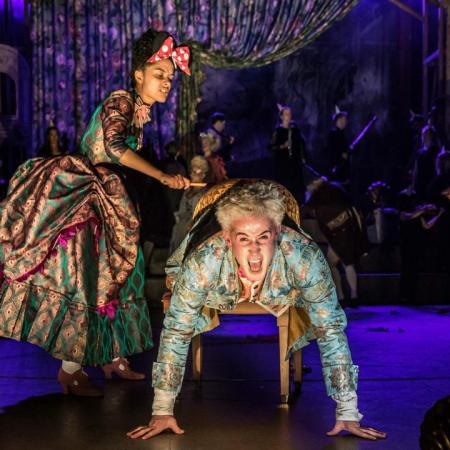 National Theatre Streams the Famed Amadeus, Courtesy of Shaffer and the Infamous Salieri

“The whole city is talking.” And that’s the point of Amadeus, Peter Shaffer’s deliciously decadent play about fame and infamy, in the beginning and the end.  The name recongition that comes wrapped up in artistry and talent, or from treachery and deceit is what is at stake here, and what leads these creatures forward into the actions that formalize their fame. It’s in the deal made with God that the lead character of Amadeus makes, and then takes back, with a vengeance when it is clear that God was either not listening, or is in fact mocking the bargain accepted. Deep inside Michael Longhurst’s (Broadway’s Constellations) revival, streaming this week on the National Theatre‘s YouTube channel, it is Salieri, played most majestically by Lucian Msamati (2015 Royal Shakespeare Company ‘s Othello), who, in a pool of harsh light, designed by Jon Clark (NT’s The Lehman Trilogy), wheels himself out, demanding to be heard in the last few hours of his life. It is that same little-known court composer that locks himself in a battle with God, determined to win against all odds against the divine. It is not Wolfgang Amadeus Mozart, the titular character, legendary composer, and a rowdy young prodigy, who battle-cries the moment. But it is he, Mozart, who causes the obsessive jealousy inside Salieri because it is that rascal who carries all the artistry and holy talent away from the very man who wants it all, and feels he deserves it more.

Played out on an overly stuffed complicated set, designed by Chloe Lamford (West End’s 1984), filled with wandering black-clad musicians from the musically sound Southbank Sinfonia and period-perfect costumed singers and actors, the piece never fully rises up to the expectations held for this classic tale that I had never seen on stage before. Shaffer created an epic tale of grandiose jealousy and revenge that translated most magnificently into the beautiful and powerful film directed by Miloš Forman (“Hair“), adapted by Shaffer (Equus, Lettice and Lovage), and starring the impossibly good  F. Murray Abraham as Salieri (who received the Academy Award for Best Actor for his performance) as well as the wonderfully engaging Tom Hulce as Mozart (who was also nominated for the same award as Abraham). It is within this vehicle that I learned of this deadly revelry and the ultimate demise of Mozart and its dark rancorous edge lined with envy and betrayal. I had heard the theatrical lore of the first production, presented first at the Royal National Theatre, London in 1979, before moving to Her Majesty’s Theatre in the West End followed by a Tony Award-winning Broadway production in 1980, but had never seen it first hand.

On Broadway, the Broadhurst Theatre production starred Ian McKellen as Salieri, Tim Curry as Mozart, and Jane Seymour as Constance, running for 1,181 performances and nominated for seven Tony Awards. It is a fairly legendary production, with the dark forbidding image emblazoned on our memories, even for those who were not lucky enough to have seen it. In an interview with Curry in 2015, the actor stated that the original was his favorite stage production that he had ever been in. And here in the 2016 revival at the National when Salieri strikes that passionate bargain with his God, the onstage orchestra bow their heads as if they were all serving themselves up to that very same God.  The musicians interestingly become players of a different order, growing more alive and excited during the encantation, but more mutinous as the bargain turns to revenge with hate and envy as its fuel. It’s a fascinating conceptualization that brings forth as many good notes as bad in Salieri’s descent, complicating an already busy staging with messy movements, but also, and always, bringing the music to luscious life.

Msamati’s Salieri finds gluttenous richness in his rancor and pride. He fills the wide space, making us lean in deeply to his amazed pain, “pain as I’ve never known it“. His emotional range, rage, and envious fever is as delicious as the sound of that oboe piercing our heart, leaving us trembling alongside the broken court composer. In those deep pools of white light, his desperate attacks on Mozart are fleshed out with raw sharp cuts, but when the chaos of Vienna whirl around him in a frenzied motion, Longhurst’s vision gets as muddled as Salieri’s compositions.Adam Gillen (center) and the cast of National Theatre‘s Amadeus. Photo by Marc Brenner.

Adam Gillen (Trafalgar Studio’s Killer Joe) as the lustful foul-mouthed man-child, Mozart crackles in a different key. He plays it wild and erratic, giving us something akin to Jim Carrey taking on the Grinch (one of my most hated film remakes), especially in his interactions with Tom Edden’s ridiculous Joseph II, Holy Roman Emperor, the man who can’t handle so many notes. Many scholars reject the Schafferian legends that Mozart was this dual-natured contradictory creature, being both a heavenly creative artist and a fool, as well as a composer who wrote out his perfect manuscripts already completely constructed inside his head, but Amadeus, the play, does such a grand job of recreating Mozart as such a man, that it’s hard to know where fact and fiction actually live in the legend.  But this Mozart is almost from another world, that is until the end draws near, and his energy for adolescent play is diminished enough for us to actually see the man and not the mania.

As Mozart’s wife, Constanze, Karla Crome (Almeida’s Dance Nation) plays it strong and sharp, giving it an edge that is both unexpected but cleverly engaged. As do the other supporting characters in this well-cast crew, such as Geoffrey Beevers (West End/Broadway’s The Audience) as Baron Gottfried Van Swieten, and Hugh Sachs (West End’s One Man, Two Guvnors) as the arrogant opera house director, two aristocrats who fail most unimaginably to appreciate Mozart’s utter musical genius. The production both flies up into the heavens, and flails in the mundane unbalanced squaller of the staging. But it is in those moments, when Salierei, while seeing Mozart as completely intollerable, can’t help but be overpowered and awed by his musical mastery, cementing the knowledge that “from the ordinary, he created legends“. Even as Mozard is maddeningly frustrated in his attempt for financial gain by Salieri and his cohorts, the fame that Salieri cries out for is graciously and heavenly embalmed in Mozart forever. Salieri is forced to find another way into being talked about and known, through scandalous infamy, by confessing to the murder of Mozart as Salieri attempts to take his own life with a razor. His confessional is met with disbelief, and he is, as in his worst nightmare, placed in the chords and constructs of mediocrity soon forgotten. That is until Shaffer made the man legendary in this compelling play, but his name is stripped from the title, leaving Salieri, once again, playing second fiddle to the iconic Mozart.

RossJanuary 3, 2023
Read More
Scroll for more
Tap
What To Watch July 23rd To Take Away The Blues
Broadway On Demand Puts Broadway Back To Work