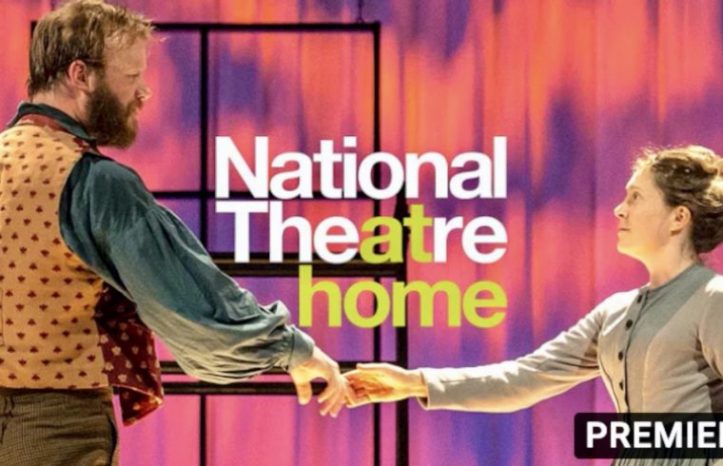 Having been first constructed and orchestrated into a two-part version at the Bristol Old Vic, director Sally Cookson finds emotional purity inside a feminist stance, dutifully extracting the essence of Charlotte Brontë’s classic story of Jane Eyre for our consumption on these hungry days of self-isolation (just like last week’s One Man, Two Guvnors). Crying out, “It’s a girl” to signal the coming of the storm clouds, the tumultuous picture of Jane’s life blows out into the audience, giving shivers of what coldness of the heart can feel like from those asked to care for in the upbringing of young Jane. The restructuring, although still somewhat too long, particularly in the first half, finds its substantial place in Victoria fiction, showering the ideals and structures of a hardened society down on us from all ends. Deconstructing the landscape into a wooden constellation that doesn’t quite fit, but also doesn’t distract us, as designed by Michael Vale, the “sit up straight”/Slap structure doesn’t hold an ounce of warmth or kindness in it, while giving us plenty of creativity to digest. But the streaming of the live production recorded a few years back at the National Theatre, Jane Eyre is certainly a gift worth receiving, and hopefully, one that will make you want to gift the organization back (click here) after viewing this flickeringly wise remapping.

Against a background of billowing curtains, ramps, stairs, and wild window panes, the ardent nature of the book flares into life within the beautifully laid out entrapment and abuse of the first half. The stark raised platform offers numerous creations for the very game cast to utilize, finding power in the space and in the billowing white background, perfect for the flooding of the scarlet light of Jane’s terrifying abusive red room and the hot flamed light of Thornfield burning to the ground, thanks to the dynamic lighting of designer Aideen Malone. Jane, dynamically played by the wonderful Madeleine Worrall (National Theatre’s Peter Pan), is a sturdy forceful young woman, determined to speak her mind, even to her detriment. “She’s a rare one“, we are told, and in Worrall’s terrific and earthbound portrayal, she brings the tortured woman to emotional life, somewhat emotionally fragile and in need at times, but as determined as a street fighter. She survives the abuse of the red room and the label of a liar, only to climb up the ladder at every turn to avoid the storms brewing around her. Act one is a muddy path in the rain, leading to a reckoning of all that lays behind her. It gets a bit tedious at times, but the payoff lives in the intricate patience of the wide-open piece. The schoolgirl friendship of Helen Burns, touchingly portrayed by Laura Elphinstone, within the fractured walls of the orphan institute, helps young Jane understand the evil of those in power and helps form the unconventional heroine that she climbs up to be; an independent and self-reliant woman who overcomes both adversity and societal norms to find peace in her inner moral code and determination to withstand the pounding beat of her journey.

Humming with an emotional intensity behind and woven in, Benji Bower’s music flickers in the light in twists and turns, elevating the mood with a disconcerting richness of an opera gone wild in the wind. The achingly subtle and strong vocals of Melanie Marshall stalks the space in red, courtesy of some fine work by costume designer Katie Sykes, giving credence to the disturbing action in the foreground. She is by no means an objective chorus, but a sign of things to come. Anyone who knows the novel well understands with increasingly clarity, that she is the personification of a wild madness that is brewing up in the attic. The gusts will whip the players into a whirlwind when that particular hurricane makes its way into Jane’s life, as the woman in red is Bertha Mason, Rochester’s first wife, patrolling the hallways with a watchful eye on the horizon. And when the time comes, her anachronistic musical descent questions, quite magnificently, whether this world “makes me crazy. Possibly”, but granting her a voice to filter the lovelessness of Jane’s existence, she tells us more about the battle of being a woman in the world than any of the well-crafted dialogue manages to illuminate.

There is a passion that struggles in the gusts of wind against madness throughout this wildly crafted retelling. They gallop through the countryside to the sound of drumming that feels like it’s from a different continent. Jane climbs ladders and runs hard from her past storms through the darkness into the home of Felix Hayes’s Rochester. It’s a wander that has an end that we are all waiting for. Here, as a governess, the thoughtful engagement she has always dreamed of by the fire is personified within the combative distrustful charm of the man of the house, dynamically embodied by Hayes (National Theatre’s Peter Pan). Before his arrival though, she finds comfort in the maternal care of the housekeeper, Mrs. Fairfax, and a sweetness she has never felt before, especially when compared to the cruelty of her uncaring aunt, Mrs. Reed, both beautifully played by Maggie Tagney (“Coronation Street“). Jane busies herself with the task of teaching Rochester’s ward, Adele, played manically by the very game Elphinstone (who also has fun portraying such various characters such as St. John, Grace Poole, and Abbot). But it’s not quite enough, she feels. Forever being followed by Craig Edwards’s barking creation, Pilot (who also constructs a great Mr. Blocklehurst and simpler Mason), the company’s energy is as wild as a windstorm blowing across the heath, echoing Jane’s ache for more. Under the scattering of those many idealistic symbolic leaves, the story’s details that are held onto feels somewhat unnecessary at times, as the ethical core strengths of Jane Eyre are secured fully inside her and the play, just like the five souls that watch over her, helping her, and guiding her.

But it is in the eyes of the watchful Rochester where the true boldness and blood of this dynamic production comes from, uncovering this woman’s fight for personal freedom and fulfillment against all odds. She is no little bird, and even when salvation from a life of poverty presents itself and is within her grasp, she declines to grab hold unless she willingly feels like she has paid the price asked. This is not your typical period piece restructuring, by any means. Sometimes the twists in the storm feel questionable. making the busy work of moving around the wooden structure oppressive, but the inward spiritual search can’t be ignored. It feels like the climbing up to the manor house through mud and rain was worth the effort, because, in the end, the fire that burns bright brings connection and warmth, even with death and destruction behind it. This is not the type of production I was expecting when I logged on to the National Theatre‘s YouTube channel to watch Jane Eyre last night (available until some point of time on Thursday), but the revitalized recreation is worth the almost three hours taken to watch and digest. It enlivens the young woman’s quest for liberty, dignity, and honor, against the cruelty of the world, and finds the love and respect she has always desired. Now that’s a reward I can easily march through the rain to receive, even when self-isolating.

Suzanna BowlingMay 18, 2022
Read More
Scroll for more
Tap
Two Live Streaming Jesus Christ Superstars Competing for Prominence, and Both Winning
What To Watch April 13th To Take Away The Blues