Network Is Changing The Game in Theatre

Network Is Changing The Game in Theatre

“This tube can make or break presidents, popes and prime ministers. This tube is the most awesome goddam force in the whole godless world! And woe is us if it ever falls into the hands of the wrong people.” Howard Beale, Network. 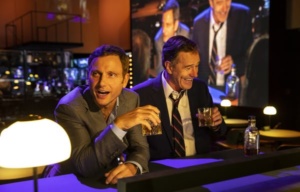 I have long been a fan of the 1976 Sidney Lumet’s movie Network. I was young when I saw it, but the impact it made on me was immense. The film, like the Broadway show, follows veteran television anchorman Howard Beale (the remarkable Bryan Cranston) of the Union Broadcasting System’s UBS Evening News, who learns from friend and news division president, Max Schumacher (a well-casted Tony Goldwyn) that he has just two more weeks on the air because of declining ratings. The following night, Beale announces on live television that he will commit suicide on next Tuesday’s broadcast. UBS fires him, but Schumacher intervenes so that Beale can have a dignified farewell. Beale promises he will apologize for his outburst, but once on the air, he launches back into a rant claiming that life is “bullshit.” Beale’s outburst causes the newscast’s ratings to spike. Beale’s ratings cause Diana Christensen (a smart Tatiana Maslany) to convince her boss, Frank Hackett (an evil Joshua Boone), to keep Beale. She approaches Schumacher and the two begin an affair. 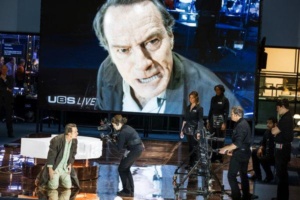 Schumacher leaves his wife (a quietly powerful Alyssa Bresnahan) of over 25 years for Christensen. 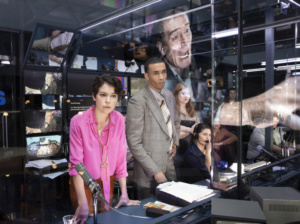 Beale discovers that Communications Corporation of America (CCA), the conglomerate that owns UBS, will be bought out by an even larger Saudi Arabian conglomerate. He launches an on-screen tirade urging viewers to send telegrams to the White House, which has CCA chairman Arthur Jensen (a haunting Nick Wyman). Jensen persuades Beale to abandon his new “evangel”. Ratings slide, and Christensen and Hackett assassinate Beale on the air. 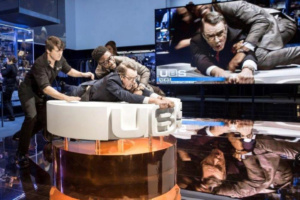 Director Ivo Van Hove has changed theatre with this production, making it part movie and part theatre. It takes a little getting used to, but you find the places where the actors are actually facing you is where it becomes theatre and much more relevant. It’s almost as if the movie part is the noise in our heads.

The sleek scenic and lighting design by Jan Versweyveld (Van Hove’s professional and life partner) is so well done, I can’t see him not earning a Tony award or at the very least a nomination. It is actually spectacular.

The multimedia-enhanced video design by Tan Yarden is also first-rate and deserves major praise. We see television screens everywhere as live filming shows us backstage, a bar on stage that does not face the audience, the sidewalk outside the theater, even Bryan Cranston getting into makeup during a pre-show countdown. A select number of audience members get to sit onstage and receive refreshments. I actually would love to see the show from this point of view.

Lee Hall (“Billy Elliot”) brings the Paddy Chayefsky screenplay into the present. The lines about corporate takeover of the news and the media manipulating the public are happening still and in greater force.

“I don’t have to tell you things are bad. Everybody knows things are bad. Everybody’s out of work or scared of losing their job, the dollar buys a nickel’s worth, banks are going bust, shopkeepers keep a gun under the counter, punks are running wild in the streets, and there’s nobody anywhere who seems to know what to do and there’s no end to it. We know the air’s unfit to breathe and our food is unfit to eat and we sit and watch our teevees while some local newscaster tell us today we had fifteen homicides and sixty-three violent crimes, as if that’s the way it’s supposed to be. We all know things are bad. Worse than bad. They’re crazy. It’s like everything’s going crazy. So we don’t go out any more. We sit in the house and slowly the world we live in gets smaller and all we ask is, please, at least leave us alone in our own living rooms. Let me have my toaster and my teevee and my hair dryer and my steel belted radials, and I won’t say anything, just leave us alone. Well, I’m not going to leave you alone. I want you to get mad. I’ve had it with the foreclosures and the oil crisis and the unemployment and the corruption of finance and the inertia of politics and the right to be alive and the right to be angry.” Howard Beale, Network.

I wanted to stand up and cheer and actually did applaud. There are more speeches like that and we need to hear them.

Cranston gives a remarkable performance that you will remember long after you see this play. His emotions are splayed naked for all to see. He is the anger, the frustration, the manic, the vulnerable, the charisma, the protagonist that lives inside all of us. He lives and breathes our feelings and is brave enough to put them on stage. This is a tour de force performance

Suzanna BowlingJanuary 26, 2023
Read More
Scroll for more
Tap
Just Give The Tony To Bob Mackie For The Cher Show
Why Do TV Vocal Competitors Think They Belong On Broadway? Clay Aiken and Ruben Studdard Christmas Show.