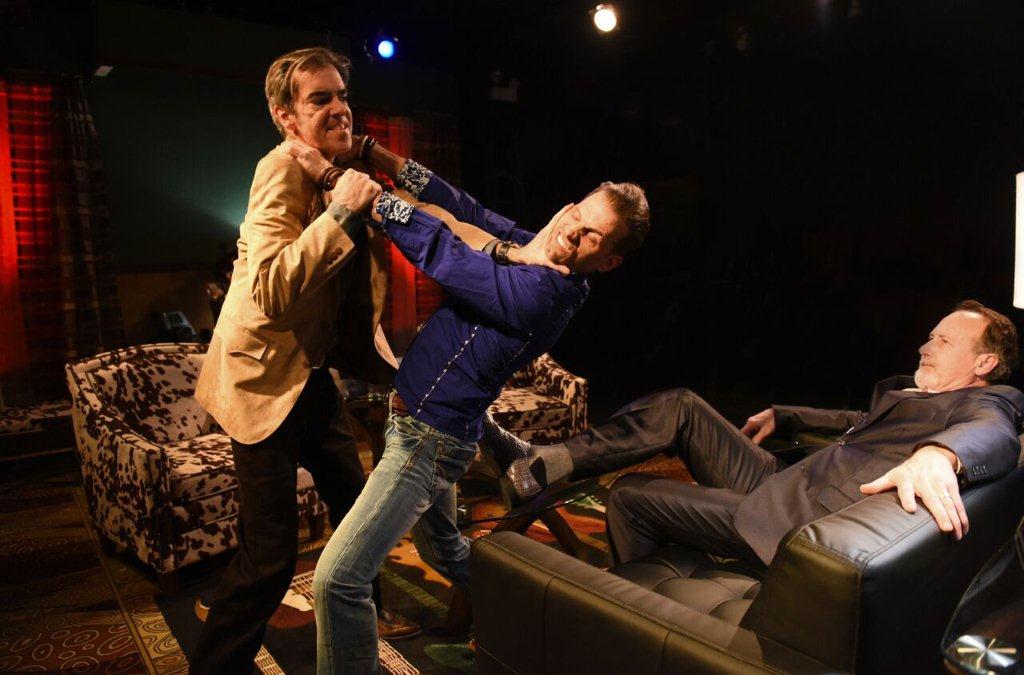 A brisk 85 minute running time and some uncensored, raunchy laughs are the primary selling points of Fair Trade Productions’ new dramedy, New Country. Written by Mark Roberts, best known as a writer and show runner on the hugely popular CBS sitcoms, The Big Bang Theory, Two and Half Men & Mike and Molly, Mr. Roberts is pulling double duty here as both writer and star. Directed by Ian Streicher, this outrageous production will have you cringing with giggles. Alas, many of those snickers are mined more from laughing at and not laughing with the one-dimensional, caricatures of characters, instead of fully fleshed out voices that should ring sincere or true. The title New Country clearly is thumbing it’s proverbial nose at the current crop of squeaky clean, over processed and pristinely packaged pop/country superstars of today, while tipping its cowboy hat to the old classics, like Hank Williams. 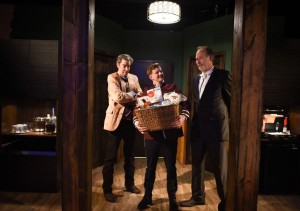 All of the action of our story takes place in a posh Nashville hotel suite, on the night before a wedding. Not just any marriage mind you, the nuptials in question belong to Justin Spears (Michael Monroe Goodman) reigning county/pop superstar whose name is clearly derived by combining current pop sensations, Justin Timberlake and Britney Spears. This glitter denim wearing “urban” cowboy has the requisite ego involved with being a present-day media sensation, but he is hiding a deep secret. Turns out he is a closeted country music star. When your fan base parallels the GOP, being an “out” star would be a career ender. We never do meet his bride-to-be, but being that this wedding is just a sham publicity stunt, arranged to keep his private life a secret, meeting her is completely unnecessary. Who we do meet are Paul (Frank Nall) Justin’s slick manager and Chuck (Will Clinger) his record producer. Both adorned in shiny suits designed by costumer Rachel Lambert, representing the true snakes this scheming duo really are. Sycophants really, combining misogynistic tendencies and homophobic attitudes, they concoct a plan to continue riding the coattails of their successful meal ticket for as long as they see fit. The real comedy lands with the arrival of booze and weed soaked Uncle Jim (Mark Roberts) a pig-farmer who resembles a cast off from Duck Dynasty, just in town for his nephew’s wedding. If Justin represents slick and glossy New Country, clearly Uncle Jim is a testament to Old Country. Hard drinking, hard living with a blow up doll in hand for Bachelor Party shenanigans. 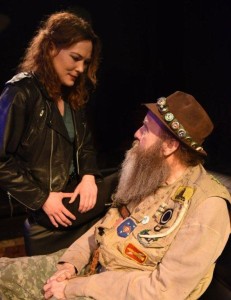 After everyone has left the hotel room with the exception of Uncle Jim who is hoping to enjoy a little “high” class alone time in the suite, a knock on the door sets the story on its ear.  Enter, Sharon (Sarah Lemp) the scorned woman. She is the former girlfriend of a less than successful Justin, tossed aside after seven years. Nurturing his talent, “teaching him everything he knows” she arrives on her motorcycle with a theoretical axe to grind. She demands answers, and more importantly, retribution. Her exchanges with the Uncle are the closest this show dares to step toward actual realist dialog. Her pain stemming not just from being tossed aside for a younger shinier model, the finance could also be considered New Country as well, the ornament designed to prop up her man,  Sharon has discovered she has ovarian cancer. Tough talking and heavy drinking, Sharon is most definitely Old Country. The final addition to the cast, Bellhop Ollie (Colter O’Ryan Smith) whose ambition to advance his station in life is ever present from the first moment he busts on stage. It isn’t long before this bellboy and the country star are caught with their preverbal “pant’s down” then a round of blackmail and deception wraps up the story. Surprisingly, most of these story lines have already been explored in a very similar fashion on the ABC primetime soap opera “Nashville” only without Connie Britton’s luminous hair to distract from their melodrama. Inserting insensitive one-liners here for every hair toss there, and it is essentially the same thing. Of note, very realistic fight choreography crafted by Joe Dempsey and am impressive set designed by Kevin Hagan. 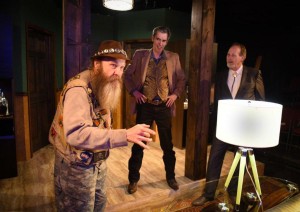 For those searching for crass and raunchy one liners, New Country fits the bill nicely. A little too misogynistic and homophobic for my taste to give it a rave, I applaud their efforts. I would be lying to say I didn’t laugh at times, but an uncomfortable laugh, much like the largely white audience in attendance during the opening remarks from Chris Rock at this years Oscar ceremony. With a little more finessing of the script, fleshing out the paper thin characters, New Country might turn out to be a two steppin’ hit. For now, it is a one note cowboy who has been out on the range far too long to sit well with this city folk.

New Country is now playing at the Den Theatre through May 14, 2016