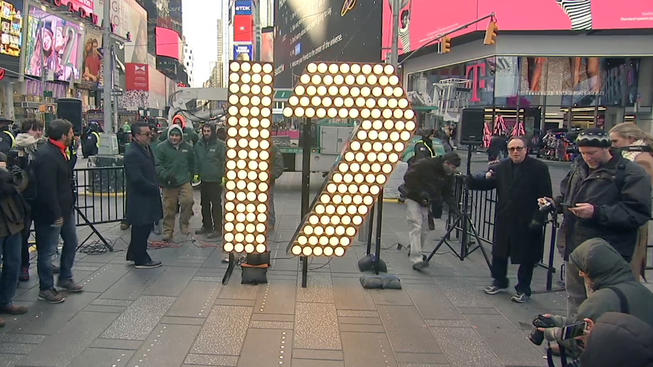 Since 1907, the geodesic sphere,  (11,875 pounds, 12 feet across and covered with 2,688 Waterford-crystal triangles and 32,256 LEDs) known as the ball drop has descended 70 feet before an almighty 60-second fireworks display of more than 3,000 colorful effects and confetti is released into the city sky.

Make sure you arrive by 3pm (earlier if the weather is nice) to stake out a spot in the Broadway–Seventh Avenue bow tie and be prepared to stay put: There are no public restrooms or food vendors. Leaving means giving up your spot. Your endurance will be rewarded with performances held across two stages, beginning at 6pm. A burst of pyrotechnics from One Times Square, every hour on the hour until the ball drop at a minute to midnight.

Before The Ball Drop

Bid farewell to the past and add wishes of hope for the future.  The Times Square Alliance has set up a pop-up Wishing Wall in Duffy Square where people can write down their wishes for 2017 on pieces of paper.

Those wishes, resolutions, hopes and dreams are then are added to confetti to create 3,000 pounds of “wishfetti,” which will rain down on revelers in Times Square at midnight on New Year’s Eve.

You can make a wish in person by visiting the Wishing Wall at Seventh Avenue and 47th Street between 11 a.m. and 8 p.m. any day of the week leading up to Dec. 29, except on Christmas Day. 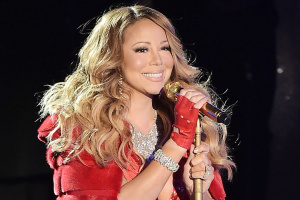 Mariah Carey is signed to ring in 2017 with a live performance in Times Square as the headliner for “Dick Clark’s New Year’s Rockin’ Eve with Ryan Seacrest” on ABC.

The pop-rock band DNCE, country star Thomas Rhett, Gloria Estefan and the cast of the Broadway musical, “On Your Feet!” will also performed live.

Carey will take the midtown stage moments before the ball drops to mark the new year.

The last time Carey performed at the annual celebration was in 2005.

Seacrest will once again be joined by Jenny McCarthy for the five-and-a-half hour show. McCarthy will serve as a live reporter from the Times Square crowd and T2C will run the entire event live in our website for the fourth year in a row. 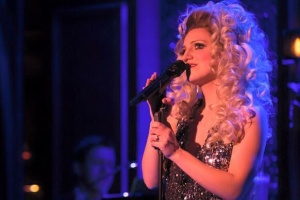 Annaleigh Ashford will command the house at Feinstein’s/ 54 Below with her band the Whiskey 5. Guests will indulge in two course dinner, dessert, champagne and an open bar. After the show, the tables will be rolled off and 54 Below will return to its disco-dancing club roots for a late night revelry. 254 W 54th St. Prices start at $325.00 to $495.00.

Sign up for this free night-ride event, which will take you from Brooklyn to Central Park to ring in the New Year. Bring your bike to the bike to the Brooklyn side of the Williamsburg Bridge or the Washington Square Park arch for a group ride under the fireworks to Central Park’s Belvedere Castle. Once you’ve disembarked, you will join other endorphin-fueled revelers for a party in the park. Free fireworks await you.

This New Year’s Eve, don’t strike out planning a memorable celebration. Head to Bowlmor New York’s largest bowling alley located just 2 blocks away from the world famous Times Square ball drop! With 90,000 square feet over 2 floors this is bowling at it’s best!! Challenge your friends on one of 50 luxury lanes, classic arcade games, pinball machines and virtual simulators (just to name a few) will test your skills in order to win some fabulous prizes. 222 West 44th St. Prices start at $149.00

Feel the New York City lights this New Years Eve at the Copacabana.1500+ guests will make their away across the copa’s 3 floors and VIP Rooftop throughout the night. 268 West 47th St. Prices start at $115.00 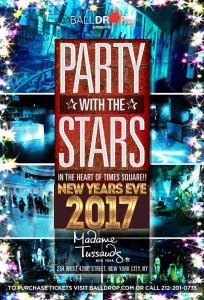 Party with celebrities at Madame Tussauds in Times Square! With over 85,000 square feet of interactive entertainment. Madame Tussauds Times Square is the only place in the world where you can get up close with Miley, Diddy, Robert Pattinson, Madonna and many more. Perfect for all ages. 234 West 42nd St. Prices start at $129.00 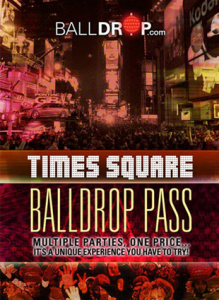 In a place as exciting as New York, New Year’s Eve can be a little intimidating without the right guidance. Everyone wants to see the right sights, especially the Times Square Ball Drop, but it can get a bit complicated. You’re in luck this year, because the Times Square All Access Pass solves all your problems. Multiple admission to parties throughout Times Square and surrounding area. Prices start at $299.00

Enjoy the magic of the latest Hollywood films at the AMC Times Square! With 3 floors of movie magic fun, as you watch the latest Hollywood movies all night long. Then take a break from your movie marathon and hit the dance floor as the celebrity DJ plays the best in top 40, hip hop, house and rock! This family-friendly event has something for the movie star in all of us! 247 West 42nd St. Prices start at $649.00.

Times Square is home to TGI Friday’s. Located smack dab in the heart of Times Square. With comfortable, casual seating and a cozy ambiance, you can dance the night away with a live DJ spinning hits from yesterday, today and tomorrow! The Times Square ball drop just blocks away outside on Fridays’ large-screen TV’s. No need to brave the cold – stay inside and watch from the bar. 761 7th Ave. at 50th St. Prices start at $189.00

Experience a New Year’s Eve by sailing your way into 2017 on a Yacht. “New Year’s Eve Harbor lights Cruise”exclusive New Year’s Eve event will cruise you around New York City while the clock ticks off into the new year! Boarding is at Skyport Marina on East 23rd and FDR Drive. Prices start at $139.00