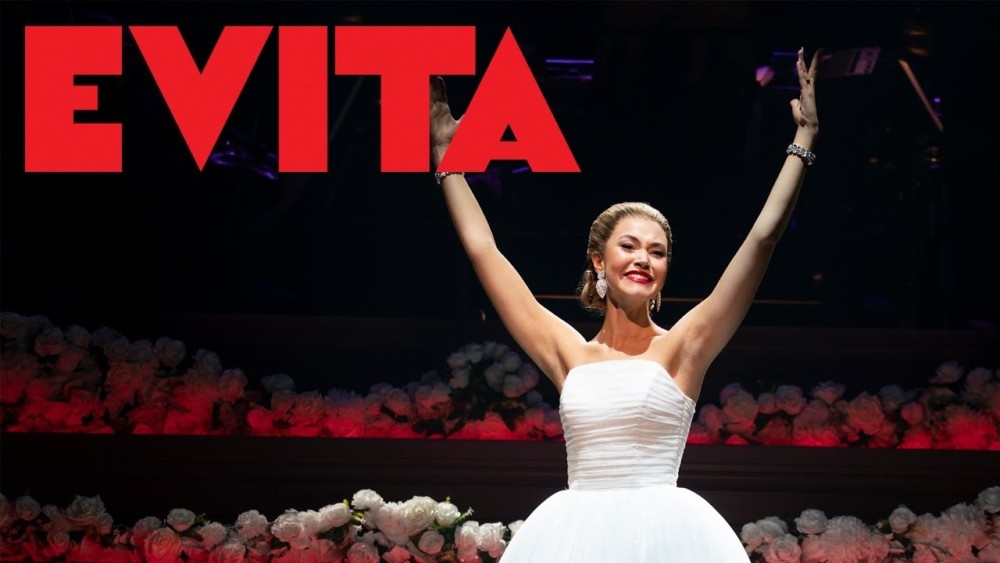 I have been following the career of Solea Pfeiffer ever since I saw the video of the Hollywood Bowl production of West Side Story. Fresh out of college Ms. Pfeiffer had the “it” factor. Now playing the role of Eva Perón in The New York City Center revival of Andrew Lloyd Webber and Tim Rice’s Evita, Ms. Pfeiffer, proves she is someone to watch.

Also hitting the right notes is Jason Gotay, as Che. His narration of the story is clear and concise and he becomes the every man voice of the people.

Sammi Cannold’s production, is sometimes strange in the fact that he uses two actors to play Eva. Nineteen-year-old Maia Reficco plays the young Eva who dreams of the big city and uses her charms to capture the over the hill slimy tango singer Magaldi (Philip Hernández). Pfeiffer doesn’t begin her ascent until the middle of “Good Night and Thank-you” and those amazing notes effortlessly flow. When she meets Colonel Juan Perón (Enrique Acevedo), Eva knows she has met her match. The aristocracy look down on her, the military despises her, but the descamisados (common people) love her. As her body breaks down Eva, has finally lost the game.

Having dual Eva’s means her younger self is always dictating her moves. It is the sexual assaults that drive her, yet it is her sexuality she uses to get what she wants.

Jason Sherwood’s set of six tieres of roses is used in a multiple of ways and looks stunning with the lighting by Bradley King.

“I came from the people, they need to adore me, so Christian Dior me from my head to my toes,” and is this production they do thanks to Alejo Vietti.

Pfeiffer’s Eva is cold, calculating and ruthless. She has an agenda, a drive and we see it radiating off her, yet she manages to show a vulnerability that is heartbreaking. The show even added “You Must Love Me” from the movie version since Pfeiffer conquers this score with panache. I want to see more of Gotay, who is a perfect match for Pfeiffer. Ms Reficco needs to learn how to enunciate.

Evita, is as strong as ever and if this production does make it to Broadway it will make a star out of Pfeiffer.