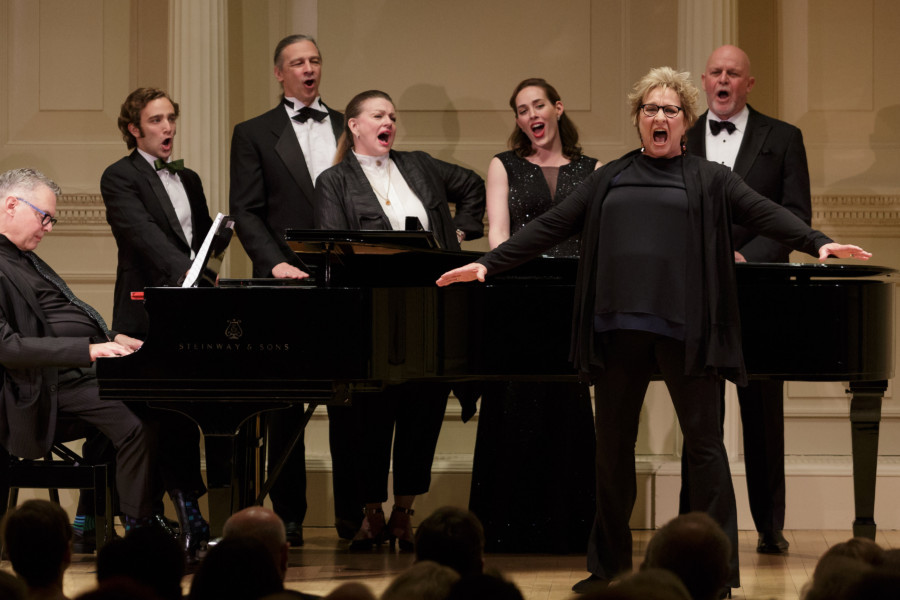 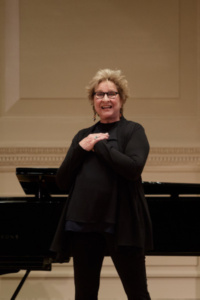 Donna McKechnie and an auditorium filled with guests gathered at the Weill Recital Hall at Carnegie Hall for the New York Festival of Song’s Spring Gala honoring Stephen Sondheim. Co-chaired by Jamie Bernstein and Hal Prince who were in attendance, as was the Guest of Honor, Stephen Sondheim. Pamela Myers (Marta in the original production of Company), Ron Raines (Tony-nominated for his role in the 2011 revival of Follies) were there to recreate songs they have sung. Opera singers Greer Grimsley and Luretta Bybee, a husband and wife known for their portrayals of Sweeney Todd and Mrs. Lovett, brought back selections from Sweeney Todd. NYFOS Emerging Artist alums Meredith Lustig and Theo Hoffman , started the evening off with “Two Fairy Tales” a cut song from A Little Night Music. I knew the song from the 1973 album Stephen Sondheim – Sondheim A Musical Tribute. The song was later added into the show Marry Me A Little. The two young singers sparklingly brought this song back to life as they did with  “Take Me to the World” from the 1966 TV special Evening Primrose. 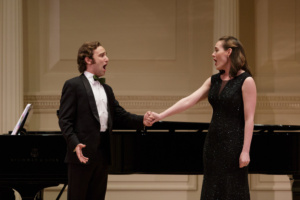 The audience was thrilled to have Pamela Myers recreate her iconic number “Another Hundred People,” from Company. She started with the monologue into the brilliant patter of Sondheim’s lyrics. Ms. Myers no longer has the chops to sing the difficult vocals, but she still has impeccable phrasing and style. 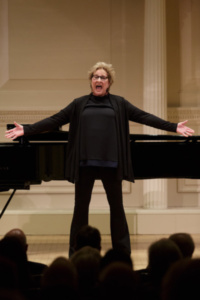 Joining Ms. Myers was the fabulous Ron Raines in the duet “You Must Meet My Wife” from A Little Night Music. 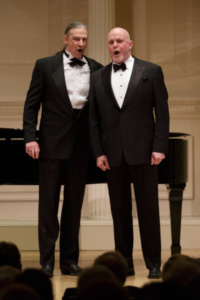 One of the highlights of the night was the duet “Pretty Women,” from Sweeney Todd between Mr. Raines and opera singer Greer Grimsley. Continuing the Sweeney Todd score “Epiphany,” “A Little Priest” and “By The Sea.” Mr. Grimsley was joined by his delightfully comedic operatic wife Luretta Bybee. Mr. Grimsley and Ms. Bybee will be playing Sweeney and Mrs. Lovett this summer. Seeing this performance made me want to attend one of those performances. Finishing the set was Mr. Hoffman on “Not While I’m Around” 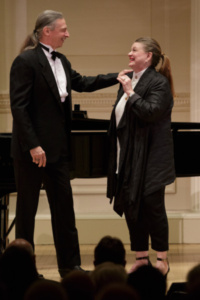 Mr. Raines showed why he was such as a hit in the Broadway version of Follies with “The Road You Didn’t Take.” There is a rumor that Follies is coming back. Hopefully Mr. Raines will lend his glorious vocals to that production. 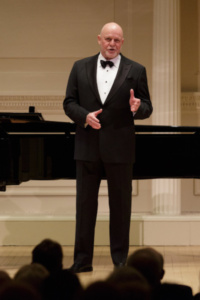 Ms. Lustig took on the jazzy, soulful “The Girls of Summer,” but was a little to classical for the piece.

As the eleven o’clock number Mr. Hoffman nailed “Talent,” from Road Show or the show otherwise known as Bounce.

Ending the night Ms. Myers proved she was indeed a “Broadway Baby.”

During the concert NYFOS Artistic Director Steven Blier added a charming commentary. If I had not been such a huge Sondheim fan, I would have found this incredibly informative, as Mr. Blier is not only a wonderful accompanist but knowledgable.

“I’ve always been dazzled by Stephen Sondheim’s songs, and my appreciation has only increased with the years. His lyrics have an uncanny precision—every rhyme, every metaphor honed to the sharpest point. His words are welded to music of enormous variety—by turns lyrical, declamatory, sentimental, ironic, and steely. And he is capable of every emotional temperature, from the blazing heat of Sweeney Todd to the aloof chilliness of Georges Seurat. I love and respect Sondheim’s art, where intelligence merges with fire to create eloquence of the highest order. It will be a thrill to celebrate his magnificent work.” NYFOS Artistic Director Steven Blier

Established in 1988, by Manhattan-based pianists Michael Barrett and Steven Blier presented the very first concert season of New York Festival of Song, a series of intimate, original ensemble song programs consisting almost exclusively of rarely-heard songs of all kinds, “from Debussy to doo-wop, lieder to latin jazz, Josquin to just-written.” Each show was unified by a theme, constructed with a dramatic arc, and cast with superb vocal artists whose committed performances brought the songs to vivid life, with the directors as accompanists and animated narrators. This same dynamic model for seeking out unusual songs and sharing them audiences continues to shape NYFOS’s concerts today, in ways that continue to delight and surprise listeners. NYFOS’s motto since that first season has been “No song is safe from us!”

I hope to continue to review NYFOS. Their next show will be held Wednesday, May 10, 2017, 7PM at National Sawdust, 80 North 6th Street, Brooklyn, with Lauren Worsham, Kyle Jarrow & Sky-Pony. A powerhouse husband-and-wife duo: Obie award-winning writer and musician Kyle Jarrow, and Tony-nominated and Drama Desk Award-winning actress and singer Lauren Worsham. Together, they lead the rock band Sky-Pony, whose rock fairy tale The Wildness was hailed by The New York Times as “defiantly exultant” and nominated for a Lortel Award for Outstanding Musical. Program and Artists TBA. Tickets available later with fall from nationalsawdust.org