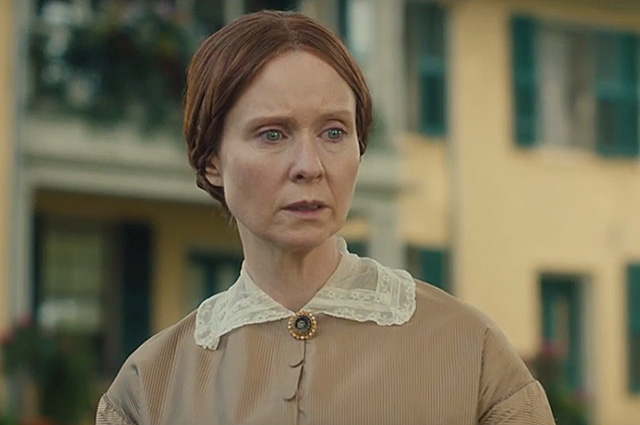 This week at the New York Film Festival, Terence Davies’ latest project A Quiet Passion played to tell the tale of one women’s painful battle against existence.

Cynthia Nixon’s powerful portrayal of the iconic poet Emily Dickinson in this biopic is undeniably irresistible to watch like a speeding train going into a brick wall. You can feel its force and it is hard to turn away from soon to be disaster.

The introspective director has created a film level that has not been seen in a while. There is a unique tone here that has been missing from cinema for a while and it is captivating. The script is that of power. The audience is left feeling as if they have watched the darkest comedy, while at the same feeling deeply saddened by a woman’s true existence.

The 19th century poet Emily Dickinson was a tough shell to crack in real life. And, here vision shared here is no different. The level of complexity shared by the artists here is poetry in motion of a rocking boat at sea.

Scenes are emotional and high-tension is vast. At times you forget you are watching a historical period piece, but rather a cheeky soap opera. But, after all this was the poet’s true life. It was complex and strange in her very existence.

History buffs to drama queens are going to love this picture.

Stephen BestJanuary 18, 2022
Read More
Scroll for more
Tap
Pedro Almodóvar’s Shines at New York Film Festival
Sensible Socialite on the Scene – The Must See Thank You for Your Service