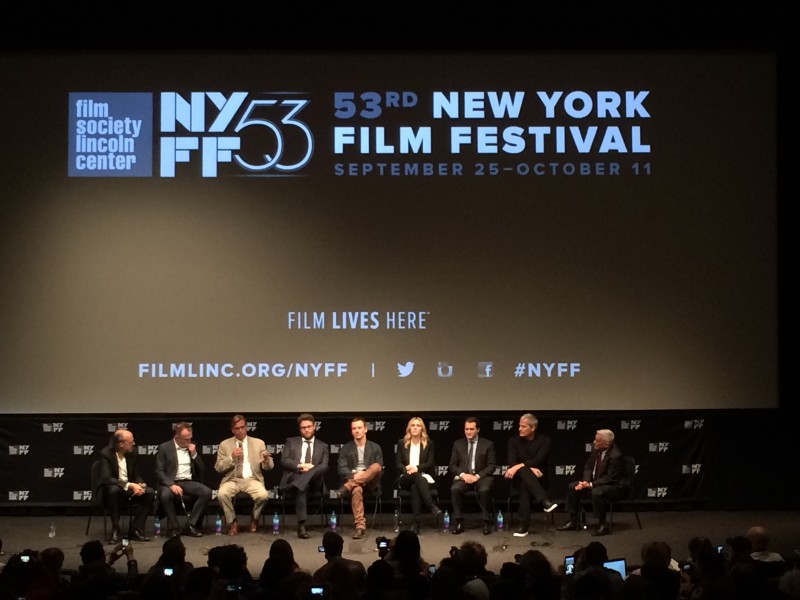 During the 53rd New York Film Festival the much-anticipated Steve Jobs premiered to roaring applause. The film set backstage at three different launches for the legend takes the audience on a journey of the creation of Apple from the man who made the magic happen.

The intimate portrait of a man at the epicenter of a technology revolution is cleverly played by Michael Fassbender. The brilliant Kate Winslet and a level-headed Seth Rogan co-star in the film that is creating massive buzz in the industry. Also featured in the film with other strong performances include Jeff Daniels, Michael Stuhlbarg, Katherine Waterston, John Ortiz, Sarah Snook, Adam Shapiro, Makenzie Moss, Ripley Sobo and Perla Haney-Jardine.

The film directed by Danny Boyle and written by Aaron Sorkin dynamically plays out much like a play that allows for moments of deep thoughtful story points, which the actors greatly appreciated.

“It was amazing,” said Winslet at the press conference about the production style.” “What Danny did for all of us that made a huge difference that was key was that he pulled everyone into the rehearsal room – all of the actors no matter how big or small a role they had – and what it did was it (made) it so there was no pecking order. We were very much given these parts to play the way we wanted too. When we walked on to the set we had a well-oiled machine.”

Due to brilliant acting and filmmaking, Steve Jobs is a film that speaks volumes and will continue to help the legend live on brightly.

ElizaBeth TaylorSeptember 14, 2021
Read More
Scroll for more
Tap
Prayers and Peace with the Pope in the Big Apple
Chris Rock Returns To Host The Oscars