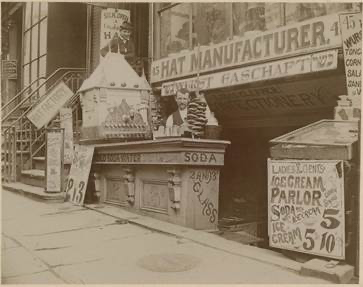 This fall, New-York Historical Society presents “I’ll Have What She’s Having”: The Jewish Deli, a fascinating exploration of the rich history of the Jewish immigrant experience that made the delicatessen so integral to New York culture. On view November 11, 2022 – April 2, 2023, the exhibition, organized by the Skirball Cultural Center in Los Angeles, where it is on view through September 18, examines how Jewish immigrants, mostly from Central and Eastern Europe, imported and adapted traditions to create a cuisine that became a cornerstone of popular culture with worldwide influence. The exhibition explores the food of immigrants; the heyday of the deli in the interwar period; delis in the New York Theater District; stories of Holocaust survivors and war refugees who found community in delis; the shifting and shrinking landscapes of delis across the country; and delis in popular culture. On display are neon signs, menus, advertisements, and deli workers’ uniforms alongside film clips and video documentaries. New-York Historical’s expanded presentation includes additional artwork, artifacts, photographs of local establishments, and objects from deli owners, as well as costumes from The Marvelous Mrs. Maisel, a mouthwatering interactive, and a Bloomberg Connects audio tour.

“It’s our great pleasure to present an exhibition on a topic so near and dear to the hearts of New Yorkers of all backgrounds,” said Dr. Louise Mirrer, president and CEO of New-York Historical. “‘I’ll Have What She’s Having’: The Jewish Deli tells a deeply moving story about the American experience of immigration—how immigrants adapted their cuisine to create a new culture that both retained and transcended their own traditions. I hope visitors come away with a newfound appreciation for the Jewish deli, and, with it, the story of the United States.”

“Whether you grew up eating matzo ball soup or are learning about lox for the first time, this exhibition demonstrates how Jewish food became a cultural touchstone, familiar to Americans across ethnic backgrounds,” said co-curators Cate Thurston and Laura Mart. “This exhibition reveals facets of the lives of Central and Eastern European Jewish immigrants in the late 19th and early 20th centuries that echo in contemporary immigrant experiences. It shows how people adapt and transform their own cultural traditions over time, resulting in a living style of cooking, eating, and sharing community that is at once deeply rooted in their own heritage and continuously changing.”

“I’ll Have What She’s Having” is co-curated by Skirball curators Cate Thurston and Laura Mart along with Lara Rabinovitch, renowned writer, producer, and specialist in immigrant food cultures. It is coordinated at New-York Historical by Cristian Petru Panaite, curator of exhibitions. The exhibition explores topics including deli culture, the proliferation of delis alongside the expansion of New York’s Jewish communities, kosher meat manufacturing, shortages during World War II, and advertising campaigns that helped popularize Jewish foods throughout the city.

Highlights include a letter in New-York Historical’s Patricia D. Klingenstein Library collection from a soldier fighting in Italy during World War II writing to his fiancée that he “had some tasty Jewish dishes just like home” thanks to the salami his mother had sent—a poignant addition to Katz’s famous “Send a Salami to Your Boy in the Army” campaign. Images show politicians and other notable figures eating and campaigning in delis. Movie clips and film stills include the iconic scene in Nora Ephron’s romantic comedy When Harry Met Sally…, which inspired the exhibition title. This and other movie scenes underscore the prominent role of Jewish delis in American popular culture.

Unique to New-York Historical’s presentation is a closer look at the expansion of Jewish communities at the turn of the 20th century, not just on the Lower East Side but also in Brooklyn, Queens, and the Bronx. In the 1930s, some 3,000 delis operated in the city; today, only about a dozen remain. The exhibition gives special attention to dairy restaurants, which offered a safe meatless eating experience; a portion of the neon sign from the Famous Dairy Restaurant on the Upper West Side is on display. Salvaged artifacts, like the 2nd Avenue Delicatessen storefront sign and vintage meat slicers and scales from other delis, are also on view, along with costumes by Emmy Award-winning costume designer Donna Zakowska from the popular Prime Video series The Marvelous Mrs. Maisel.

Visitors are invited to build their own sandwiches named after celebrities, such as Milton Berle, Sophie Tucker, Frank Sinatra,  Ethel Merman, and Sammy Davis Jr., in a digital interactive inspired by menu items from Reuben’s Deli and Stage Deli. On the Bloomberg Connects app, exhibition goers can enjoy popular songs like “Hot Dogs and Knishes” from the 1920s, along with clips of Mayor Fiorello La Guardia discussing kosher meat pricing, 1950s radio ads, and interviews with deli owners forced  to close during the pandemic lockdown.

In a nostalgic tribute to departed delis that continue to hold a place in the hearts of many New Yorkers, photographs show restaurants that closed in recent years. Eateries include the Upper West Side’s Fine & Schapiro Kosher Delicatessen, Jay & Lloyd’s Kosher Delicatessen in Brooklyn, and Loeser’s Kosher Deli in the Bronx. An exuberant hot dog-shaped sign from Jay & Lloyds Delicatessen, which closed in May 2020, and folk artist Harry Glaubach’s monumental carved and painted signage for Ben’s Best Kosher Delicatessen in Queens, also pay tribute to beloved establishments. The exhibition concludes on a hopeful note, highlighting new delis that have opened their doors in the past decade, such as Mile End and Frankel’s, both in Brooklyn, and USA Brooklyn Delicatessen, located steps from the site of the former Carnegie and Stage Delis in Manhattan.

G. H. HARDINGAugust 10, 2022
Read More
Scroll for more
Tap
A Food Haven in the Hamptons – El Turco Brings Enlightened Culinary Experience Out East
Broadway In Bryant Park: And You Are There Part 1