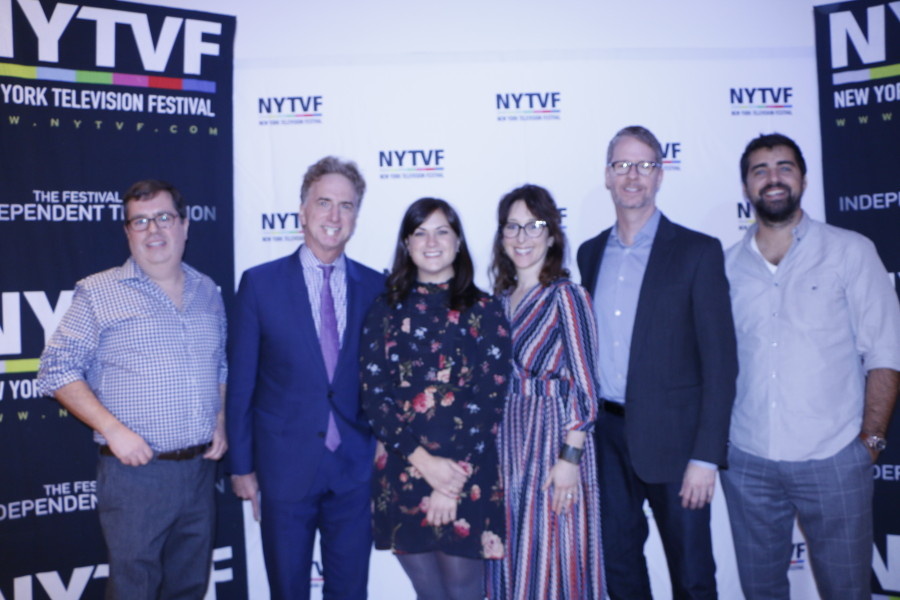 For young TV creators, the NYTVF is the best place to launch a career. The exposure to key people in the industry is invaluable. Attending some of the panels diversity, point of view and keep creating content were the themes echoed by most of the professional on the panels.

The 12th annual New York Television Festival wrapped tonight after a landmark week for the organization.  During an awards reception at the Helen Mills Theater and Event Space in Manhattan, NYTVF (www.nytvf.com) announced the winners of its flagship Independent Pilot Competition (IPC) in 15 categories, with the “Best of the Fest” honors going to “The Worst Husband” (Independent Pilot Competition) and “Medium Well” (NYTVF Scripts). Recipients of development deals from the NYTVF’s network and studio partners were also announced.  (See below for a full list.)

This year’s New York Television Festival boasted the most submissions, Official Selections, Official Artist and industry participation in its history.  This included the following Festival records:
• 3,500-plus submissions received, with 84 total projects selected to be in competition at the Festival, including 21 in the inaugural NYTVF Scripts initiative, and an all-time high of 63 in the Independent Pilot Competition.
• More than 325 Official Artists were invited to attend the Festival.
• Through NYTVF Connect, more than 550 networking and pitch meetings between Official Artists and industry executives were facilitated by the Festival – up from 420 in 2015.
• Industry engagement increased, with a record 75 companies participating in these meetings, including representatives from leading networks, studios, agencies, production companies and digital platforms.
“From the moment we began the submission assessment process, I felt that because the talent level was just outstanding, this could be a game-changing year,” said NYTVF Founder and Executive Director Terence Gray. “The engagement from the industry and willingness and enthusiasm to support the artists invited to the Festival are by-products of the fact that we are seeing exceptional storytellers participate in our initiatives across the board. I’m blown away by the response from both the creative community and industry decision-makers, and this fantastic week has us already looking forward to next year.”
The following Official Selections of the Independent Pilot Competition were presented with awards across 15 categories tonight, along with an award in the inaugural NYTVF Scripts initiative:
Best Animation: “Fired On Mars” created by Nick Vokey and Nate Sherman – Los Angeles, CA
Jeff just got fired from his graphic design job. On Mars. And there’s no way for him to get home.
Best Comedy: “Poor Todd” created by Liz Astrof (Los Angeles, CA)
A self-proclaimed “low maintenance” pediatric dentist and her long-suffering, under-earning menschy husband deal with everything from humorous daily minutiae to major life struggles like money, career, life insurance, and kids…potentially.
Best Drama: “According to My Mother” created by Daniel K. Isaac, Cathy Y. Yan, and Devin Landin (Queens, NY)
This modern take on the family series features a young, gay Korean-American living in New York and his disapproving, devout Christian mother who moves in with him…and changes everything.
Best Short-Form Comedy Series: “Textbook Adulthood” created by Madeline Walter and Paul Welsh (Los Angeles, CA)
Two SAT tutors wonder if the transitional job they started in their 20’s has turned into a sad career as they enter their 30’s.
Best Short-Form Drama Series: “Her Story” created by Jen Richards and Laura Zak (Los Angeles, CA)
This modern relationship drama follows Violet and Paige, two transgender women in Los Angeles, who have given up on love when chance encounters suddenly give them hope.
Best Unscripted: “Comedy Digs” created by Shelly Gossman and Blythe Haaga (Los Angeles, CA)
In this twist on the home improvement genre, SNL writers-room alum Shelly Gossman helps her fellow
comedians turn their grungy pads into homes suitable for grownups as they sort through comedic oddities and tackle tricky DIY projects.
Best Actor, Comedy:  Keith Powell for “Keith Broke His Leg”
Best Actor, Drama: Daniel K. Isaac for “According to My Mother”
Best Actress, Comedy: Julia Mattison for “Brooklyn Sound”
Best Actress, Drama: Angelica Ross for “Her Story”
Best Writing: Adam Weinstock and Andy Jones for “On the Bright Side”
Best Directing (Tie): Sonja O’Hara and Jaspal Binning for “Doomsday” and D.W. Waterson for “That’s My DJ”
Best Editing: Drew Van Steenbergen for “Brooklyn Sound”
NYTVF Critics Award:  “The Worst Husband” created by Steve Dildarian (Los Angeles, CA)
Vance Johnson is a decent guy who is newly married and new to the suburbs. Confronted by judgmental neighbors, conservative in-laws, and nosy co-workers, his good deeds somehow get twisted and misunderstood, and he comes across looking like the worst guy ever.
Best of the Fest – Independent Pilot Competition:  “The Worst Husband” created by Steve Dildarian (Los Angeles, CA)
Best of the Fest – NYTVF Scripts:  “Medium Well” written by Christina Brosman (Brooklyn, NY)
Marjorie has spent the last decade as an assistant to a celebrity chef and a wife to her high school
sweetheart. Now in her 30’s, she’s finally ready to admit that she wants a culinary career of her own…and a divorce.
IPC selections can be found at http://www.nytvf.com/2016_ipc_selections.html.

truTV Greenlight Deal: Shelly Gossman and Blythe Haaga for their project “Comedy Digs” (Los Angeles, CA)
This winner has been selected to develop a project in partnership with truTV and NYTVF Productions.
WEtv Pitch Deal:  Joseph Gerbino and Erica Hart (West Palm Beach, FL)
In addition to the above, New York Women in Film and Television awarded a platinum memberships to Alex Trow and Katie Gibson in recognition of their work on “Inappropriate Jane Austen.”  Previously-announced winners and honorees in the JHRTS Script Competition and NYTVF-Just for Laughs Script to Screen TV Pitch Competition were also recognized during Saturday night’s awards reception.
Established in 2005, the NYTVF constructs new and innovative paths of development and talent identification, while simultaneously complementing the traditional television development model. By partnering directly with networks, studios, production companies, digital platforms and brands, the NYTVF provides its Industry Partners with a streamlined development model, leveraging its vast creative community of more than 5,000 independent producers and production companies, to create content with specific partners in mind. During the annual New York Television Festival – held each fall in New York City – the NYTVF brings together its top artists and industry decision-makers for a series of events designed to foster networking, collaboration and education, while also featuring screenings of top independent content, educational panels, fan events, red carpet premieres, and more. The Festival also marks the culmination of the organization’s yearly development efforts, and since the first deal was guaranteed by an NYTVF partner in 2007, more than 140 have been awarded.  For more information on the NYTVF and the annual Festival, visit www.nytvf.com, and to learn about opportunities to submit for its year-round competitions, visit http://www.nytvf.com/submit.html.

Suzanna BowlingNovember 24, 2022
Read More
Scroll for more
Tap
Bennie and Joon And Eden Espinoza Makes The National Alliance for Musical Theatre’s Festival
What to Do For a New York Halloween