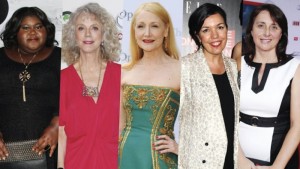 Honored for the day were Gabourey Sidibe, Blythe Danner, Patricia Clarkson, Sarah Barnett and Victoria Alonso for their outstanding work in the industry.

“This is an incredible event and it means a lot to the women here today,” said Sunda Croonquist on the red carpet.

The spirited Muse Awards recognize and celebrate the remarkable achievements of women in the film, television and digital media industries. Actress and CBS Commentator Nancy Giles emceed the event.

“We look forward to the Muse Awards each December and this year is certainly no exception,” said New York Women in Film & Television Executive Director Terry Lawler. “The inspirational event gives us another opportunity to get together to not only support and mentor each other as we do on a regular basis, but to really take a moment to credit success, outstanding talent, entrepreneurship and vision among our remarkable colleagues and friends. There are always some surprises during the afternoon, as you can imagine with such a great group of charismatic, fun and smart people celebrating in one place.”

The preeminent entertainment industry association for women in New York City, NYWIFT supports women calling the shots in film, television and digital media. NYWIFT energizes the careers of women in entertainment by illuminating their achievements, providing training and professional development activities, and advocating for equity. Membership includes more than 2,000 women and men working in all areas of the industry. NYWIFT is part of a network of 40 women in film organizations worldwide, representing more than 10,000 members. For further information about New York Women in Film & Television, please visit nywift.org and follow them on social media for additional event updates, news and photos.