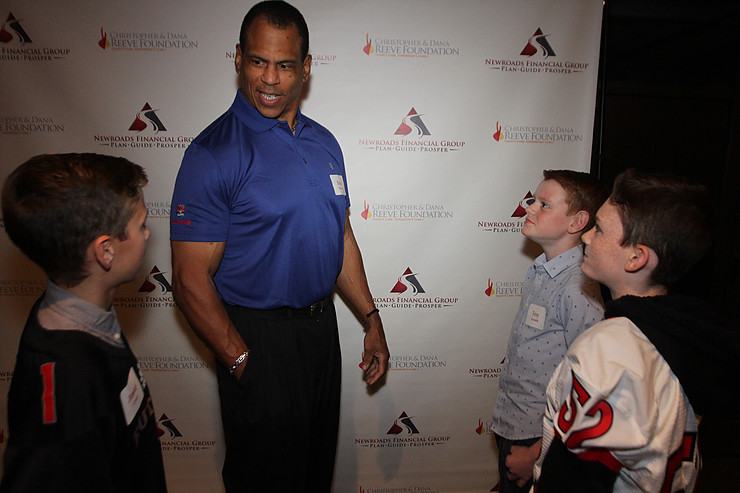 Newroads Financial Group hosted the 7th Annual An Evening with Eric LeGrand last evening at the Fiddler’s Elbow Country Club in Bedminster, NJ to help former Rutgers football standout Eric LeGrand raise awareness of and funding for spinal cord injury research. Newroads President, Jason Newcomb and Newroads Partner Ron Garutti Jr., both proud Rutgers Alumni started this event 7 years ago with the intention that it would be held one time to help Eric launch Team LeGrand, his chapter in the Christopher and Dana Reeve Foundation.

Eric was injured making a tackle in a game between Rutgers and Army art Giants stadium nine years ago which left him paralyzed. In the time since this accident Eric has gone on to become an author, sports broadcaster, clothing designer, motivational speaker and more importantly and inspirational force in the world. He fights tirelessly to raise funds for and awareness of spinal cord injury research.

Event organizer and Rutgers Super Alumni Jason Newcomb had this to say of the evening; It’s amazing to look back after 7 years of hosting “An Evening with Eric LeGrand,” and think that this was supposed to be a one-time event.  The outpouring of support for such an inspirational man continues to be overwhelming.  Every year we think that perhaps this is the year where we lose a little momentum, but instead the event only continues to grow.  We were at MetLife Stadium that October day 9 years ago, and made the (easy) decision to join the fight for those living with paralysis.  After last night’s event, we have now helped raise over $330,000 towards this critical cause and can’t wait for the day where we get to see Eric walk across the field to finish that play!  Until then, it is our pleasure and honor to continue to do our small part to help find a cure for spinal cord injury.  We hope that you are able to join us for next year’s event on 11.5.20!

Jason is one of the biggest Rutgers boosters I have met to date, attending and supporting any nature of Rutgers sports as well as actively supporting alumni clubs and functions. As a photographer covering Rutgers Football I can not recall the last time that Jason missed a game. His business partner Ron Garutti Jr. is also part of the much larger Rutgers family and works tirelessly to put together this event each year. As a Rutgers alumni myself I felt the need to care for our own when Eric was injured as did so many members of our Scarlet Knight community. I have offered my services as a photographer and have covered countless fund raising events that Eric has held over the years, from the corn hole tournament this past summer to his zumba event to his flag football tournaments to newest signature event, kickboxing at CKO.

Having covered dozens of Eric’s events over the past 9 years I consider myself blessed to work alongside Team LeGrand. Eric’s unflappable inspiration is only ever overshadowed by his constant smile. Always willing to stop and take time to talk to fans and supporters Eric goes out of his way to offer words of encouragement to others that have suffered spinal cord injuries. At one event many years ago I witnessed firsthand as Eric had a long conversation with a young boy that had recently become paralyzed. The event organizers were trying to keep to the schedule and needed to get Eric to address the waiting crowd. As they tried to pull Eric away he waved them off. Three times. Finally the young mans mother told him that he had to stop chatting so that Eric could get on with the event. They young man, didn’t look older than 12, asked Eric if he could get his phone number as he was leaving. The boys mother interjected telling her son, “oh he can’t do that”. But Eric said,”Why not?” and he made sure to get the boy his personal cell number before leaving to address the crowd. This is Eric LeGrand. This is Rutgers. This is the spirit of “R” family. This is volunteers such as Jason, and Ron, hosting this huge event each year.

Eric gave an inspiring speech as he always does. He was joined on the stage by Ron Gold. Ron provided inspirational words as well. Describing his ordeal and how he manages the changes. He told a harrowing tale of his newest sports passion and how he ended up capsized while strapped into a specially outfitted water craft. He then reveled how that did not deter him from pursuing his new passion as he announced that he had recently won a competition and then he proudly displayed his medal. Most of us may have given up after the capsizing incident but Ron, much like Eric is one of those rare people that not only persevere but push other to do better.

There just aren’t enough word to thank the amazing Newroads team for all of their hard work and dedication in support of Eric and all those effected by spinal cord injury. Well done!!!

To see additional photos please check the gallery below. For an album of all event photos that can be shared to social media or downloaded, low-res only, click here.

G. H. HARDINGNovember 30, 2022
Read More
Scroll for more
Tap
What Criteria Should You Look for in an Event Bartending Company?
Inside Heidi Klum’s Halloween Bash