Nice and Shiny: Ryan McCartan is a Star on the Rise 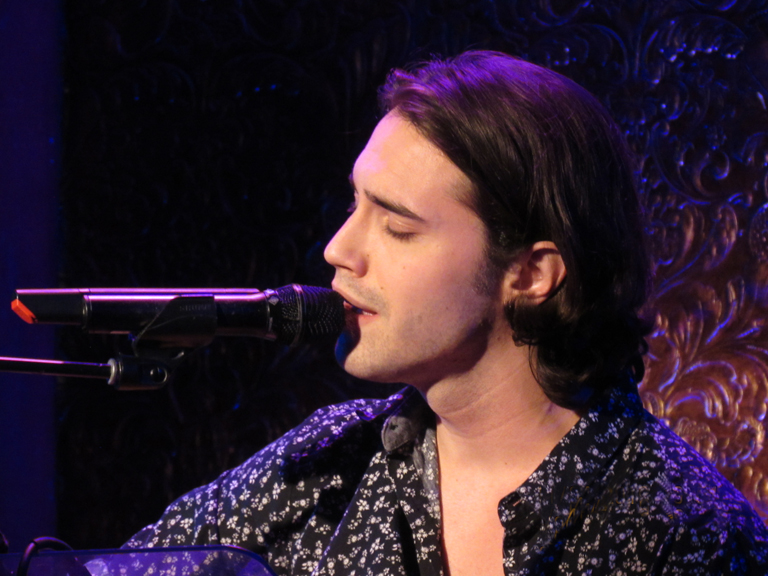 Nice and Shiny: Ryan McCartan is a Star on the Rise

A bright, shiny shooting star passed across Broadway Monday night, in the person of Ryan McCartan. If you were lucky enough to be in the audience at Feinstein’s/ 54 Below on Monday night, you would have gotten a great glimpse at his talents.

At first glance, one might joke that it must be tough being Ryan McCartan.  After all, what doesn’t this young man have going for himself? He’s strappingly tall, boyishly charming, achingly handsome, utterly genuine, with the voice of an angel and an army of eager young women ready to throw themselves at his feet.

But Ryan might tell you getting to where he is today was no joke. You don’t really know somebody, they say, until you know their pain. So, in a very intimate show that was equal parts casual, entrancing, and at times brutally honest, this rising young  star of the musical theater shared the joy and the sorrow of his deepening experience in both musical theater and in life with an adoring audience.

For the most part, this talented singer, musician and songwriter backed himself up on acoustic guitar. He also used a clever gizmo called a Looper, which let him build rhythm backing tracks for himself right before our eyes. But for a few numbers, he was joined onstage by the piano talents of Garritt Taylor.

His set was organized to reveal both his personal struggles, and the serendipity that opened doors for him professionally. As a teen performer, he won the Jimmy Award, which led to his first trip to L.A. He shared the song he sang which won that award, “Someone To Fall back On,” by Jason Robert Brown.

In L.A., where he slept in his car and showered at the gym, his manager, Nancy, believed in him enough to take him into her home. The very next day, he landed a Disney TV show, Liv and Maddie. It was the producer of Liv and Maddie who brought him in to audition for the Off- Broadway production of the edgy teen-themed musical, Heathers. His performance of “Freeze Your Brain” from that show clearly showed why he was a hit in it.

But NYC was rough on Ryan personally. He found a song called “Dead Sea” by Wesley Shultz and Jeremy Fraites of The Lumineers, which he says helped him rise above. As the lyric goes, “You’ll never sink when you are are with me”. In case you don’t know, the salt content of the Dead Sea keeps people who swim in it perpetually afloat.

After Heathers, Ryan went back to L.A., where author Jodi Picault contacted him to sing a demo of a song called ”Something to Hold On To” from a new musical she was writing.

Then Kenny Ortega, the director-choreographer of High School Musical fame, called to invite him to audition for a new filmed remake of The Rocky Horror Picture Show. He landed the role of the square-jawed hero, Brad. For this performance, he invited the delightful Brittney Johnson,  notable as having been the first black Glinda in Wicked, to join him to sing, “Damn It, Janet.” Much to his credit, he made this song funny and charming in a way that Barry Bostwick never did as well for me in the original film.

He followed that with a song from the show also for Brad called “Once In A While” which was cut, with clear justification, when the stage play was first adapted to film.

His second guest of the evening was the lovely and talented Taylor Iman Jones, who currently is co-starring with him in Scotland, PA, the new Adam Gwon musical based on Shakespeare’s Macbeth. They sang a duet by Pentatonix called “Can’t Sleep Love” which was simply lovely.

But as Ryan told us, things turned darker for him after Rocky Horror. The film, which he hoped would make him a movie star and household name, bombed. Then his fiancee left him for another man, he was hospitalized for food poisoning, and worst of all (hey, he said it, not me) Donald Trump got elected. To illustrate his mood after all this, he sang “Don’t Wanna Fight” by Brittany Howard, a song I found more passionately spirited than articulate.

Ryan then turned to songwriting and released two albums of his compositions on Seventh Avenue Records. The one song he did from those albums, “Walk Away,” isn’t going to send me running to hear the rest of those songs. Ryan seems attracted to songs with simple, repetitive choruse that fly easily in the world of pop, but which seem inadequate in a Broadway environment. Nonetheless, he performed it nicely.

His next song was an interesting surprise. He sang a loving and passionate rendition of “My Man” from Funny Girl by Bob Merrill and Jules Stein. So, you might wonder, what’s a nice, straight musical theater boy doing singing that song? He explained after the song that his first and most beloved mentor in the musical theater was a man who molested him sexually as a theater teen. He spoke of this, and surviving the memory of it, with a surprising degree of acceptance and no bitterness.  After all, he told me after the show, at the time he experienced that he saw it as  a positive thing, to the extent that he looked up to and cared for his mentor. It’s possible to have good memories of an experience which turns out to be a bad thing.  I could not help but admire his willingness to own every aspect of his life with grace and dignity. Click here to see our interview with Ryan on this subject.

He closed his set in a touching duet with his sister, Alison, whom he credits as his real musical inspiration. When he was just a young boy with his sister in the car, she started singing “Somewhere Over The Rainbow”, and Ryan joined in. That was when the family discovered Ryan could sing, and Ryan found he might have a calling. The chord changes and harmonies were at times unexpectedly funky. But that didn’t take away from the beauty and joy of their performance. Ryan’s parents were in the audience, too. He made us all feel like we were at a big family gathering, which I was glad to be a part of.

The long line of young women waiting to meet him after the show cemented my belief that Ryan is a Broadway star in the making. So be sure to catch him in Scotland, PA, and look for him to be a regular on The Great White Way for a long time to come.