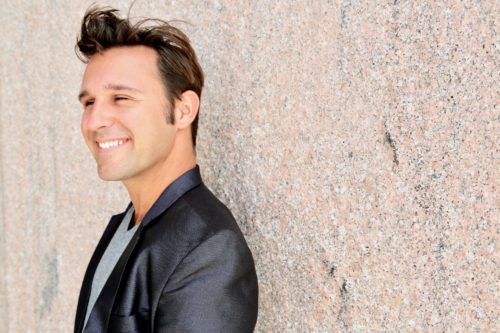 Nicolas King’s album Act One is the most confusing album I have ever listened to. Recorded from live concerts past and present, Liza Minnelli Nicolas King’s Godmother and mentor introduces him. A fabulously sung “Life is Just a Bowl of Cherries mashed up with “Nice N’ Easy” followed by “God Bless The Child” conceived by Minnelli are delivered well. The problem here, is I thought this was a woman, not a man. I actually had to call up the publicist to ask who was singing.

Then we have an old recording of “Yes Sir, That’s My Baby” (with Tom Selleck), that is King as a child, that sounds like it was recorded in the 30’s.

Finally we have a great bass arrangement of “How Deep Is The Ocean”. I loved Alan Bernstein’s bass and the vocals are well delivered.

The arrangements here are all terrific. “Can’t Take My Eyes Off You,” a bluesy “The Only One,” a wistful “I’m So Glad We Had This Time Together” mashed with “My Shining Hour” and a swinging “Looks Like They’re In Love” show that King has vocal chops.

The haunting “You Must Believe In Spring,” is my favorite of the album.

“But Beautiful (with Jane Monheit),” and his duet with Norm Lewis on “What a Wonderful World” has his collaborators out shinning him.

The Sesame Street song “Sing” is swinging and the beautifully arranged (Mike Renzi)”What Matters Most” is haunting. Kudos must be given to Mike Renzi who arranged most of the songs on the album. The arrangements I was impressed by. The final song is “Come Back To Me” from On A Clear Day.

Mr. King has wonderful control, vocal brilliance, but it comes and goes, His expertise is more mature than his twenty-nine years. King knows how to phrase, but he lacks a connection that makes me want to copy and imitate.

I must admit I had never heard of Mr. King before and though he is polished, I don’t hear a raw emotional core that makes me listen to singers over and over again. Many will like Mr. King’s vocals, but I need more.

Back to an old recording of “There’s No Business Like Show Business,” that again is scratchy made me think some recordings should be kept for friends and family.

I did however love looking at the liner notes which are comprehensive, with wonderful archival pictures.

Mr. King is well connected, and though he can sing, this album did not bowl me over. King has spent twenty-five-years in show business, but this sixteen track album does not make me want to see Act 2.

Suzanna BowlingJuly 30, 2022
Read More
Scroll for more
Tap
What to Watch in The New Year: March 7
The Glorious Corner