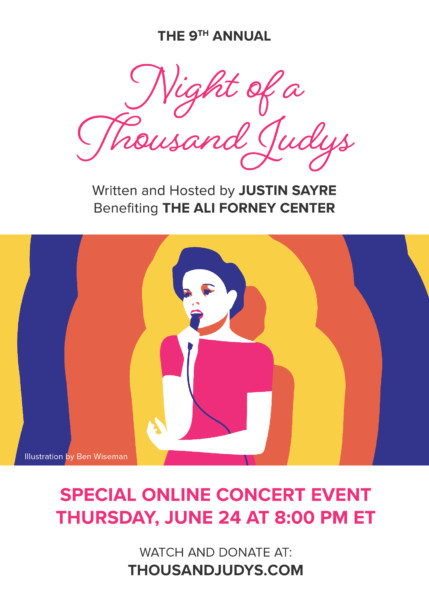 “Night of a Thousand Judys” will honor the iconic Judy Garland with tributes and songs from her legendary career as movie star, recording artist and stage performer. The virtual event is written and hosted by Justin Sayre, featuring Tracy Stark as music director. “Night of a Thousand Judys” is produced by Dan Fortune and Adam J. Rosen, with Dan Fortune serving as executive producer.

“We’re all getting back to normal, but maybe we can make a new normal,” says Justin. “A normal where LGBTQIA kids don’t experience homelessness at such a larger rate than most. Maybe our new normal can be better, for these kids. Maybe we can insist that it is. We all had to stay at home this year to be safe. We all deserve a home where they can be safe. That’s what the work, that’s the new normal that the Ali Forney Center is fighting for. We’re all honored to help them creating this new normal.”

The Ali Forney Center is the nation’s largest and most comprehensive agency dedicated to LGBTQ homeless youths—assisting nearly 1,400 youths per year through a 24-hour Drop-In Center which provides over 65,000 meals annually, medical and mental health services through an on-site clinic, and a scattered site housing program. AFC’s goal is to provide them with the support and services they need to escape the streets and begin to live healthy and independent lives.