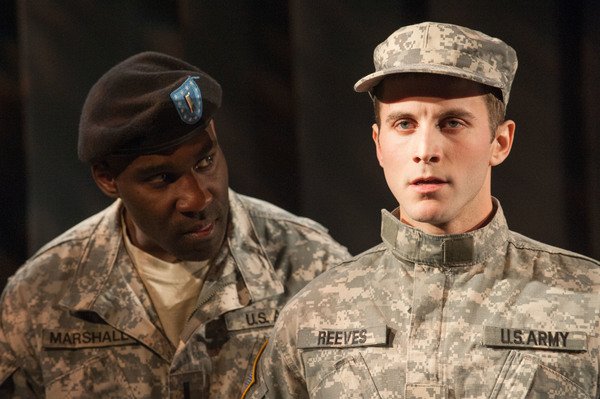 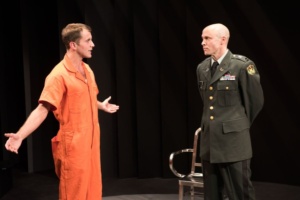 Bill Cain’s 9 Circles is based on the military career and subsequent civilian trial of murderer Steven Dale Green. Cain a Jesuit priest iuses the plays title to refer to Dante Alighieri’s Inferno, in which Dante descends into the “nine circles of hell.” Green here is known as Pvt. Daniel Edward Reeves (Josh Collins). Due to a personality disorder the Army is sending him home from Iraq with an honorable discharge, but Pvt. Daniel Edward Reeves, does not want to be let go. He sees his disorder as a asset stating “Some things don’t bother me the way they bother other people.” His lieutenant (David St. Louis) disagrees and Reeves is sent home. Once home in the US he wakes up in a holding cell and is charged with the brutal murder of an Iraqi family and the rape of a 14 year old girl. He strongly states he did not commit this crime as slowly we find out the details. He is being railroaded first by a public defender, then a pastor (Louis again) and then by an army defense officer (Aaron Roman Weiner). We flashback to Iraq, where Reeves seeks a psychiatrist (Ryman Sneed) help for not being a greater comfort to his sergeant as he lay dying. She fails Reeves, just as the army did when they recruited him knowing he was mentally unfit. 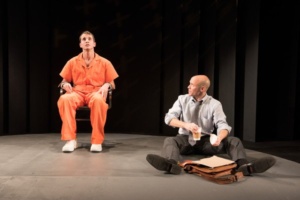 Josh Collins’s performance is layered and believable. His Reeves seems intelligent, though lacking guidance while being raised. It is hard to believe that he was capable of the killings. There were three other men involved and yet in 9 Circles if you had asked myself or my guest if we thought Reeves was guilty, we would have said no. In the very end when he confesses, it seemed forced. The facts of the case did not seem like he committed the crime, where in real life  Steven Dale Green was guilty as charged. In this Cain’s play fails or Mr. Collin’s performance fails to allow us to see the total lack of humanity or director Kent Nicholson failed in getting Mr. Cain’s intent across. Somewhere there is a disconnect because we feel for Reeves and at one point we are asked if he is guilty and I do not think my audience would have said yes. 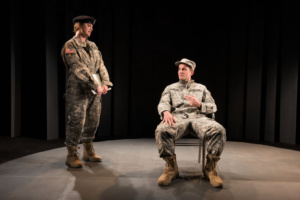 Suzanna BowlingMay 17, 2022
Read More
Scroll for more
Tap
She Says: Linda Exposes Dark Truths
She Says: Come From Away is Where Humanity is Redeemed