In the Magic Show

If you are a musical theatre fan then “West End Avenue” and “Lion Tamer” are most likely embedded into your musical memory. Dale Soules was the originator of those two songs that dominated musical theatre wanna be’s in the 70’s. Stephen Schwartz’s The Magic Show was Soules third Broadway musical. She made her Broadway debut in the original HAIR. Soules followed that with the short lived Dude. Now Broadway veteran and two-time SAG Award winner Dale Soules has just been nominated for her third Screen Actors Guild Award in the category of Outstanding Performance by an Ensemble in a Comedy for her work on the smash-hit Netflix series Orange Is The New Black.  Dale plays no-nonsense inmate Frieda Berlin who boasts neck tattoos and knows a lot about murder.  She is currently shooting Season 5 of the award-winning series. 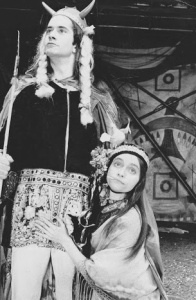 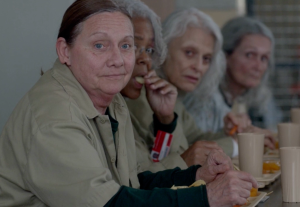 Dale recently completed shooting the films Aardvark with Zachary Quinto and AWOL, an award-winning feature film which premiered at the Tribeca Film Festival in 2016. This past Spring, the New Jersey native reprised her three roles, including Papa, in the all-female production of I Remember Mama at Two River Theater.  In 2015, she co-starred with Patti LuPone and Michael Urie in Shows for Days at Lincoln Center Theater and reunited with Doug Wright for their third collaboration on Posterity at the Atlantic Theater Company. This also reunited her with Neil Pepe, who directed her in the Broadway (and LaJolla Playhouse) productions of Hands On A Hardbody. She has also appeared in ATC’s productions of The Water Engine, The Joy of Going Somewhere Definite (directed by William H. Macy), and Blithe Spirit.  Ms. Soules was featured in the Broadway productions of Grey Gardens (Broadway and regional, Theatre Works – OCC Nomination), The Crucible (with Liam Neeson) and Whose Life Is It Anyway? .  Her additional credits include Marsha Norman’s Getting Out, New Jerusalem, Lotta, The Unknown (Public Theatre), Maid, Gather At The River, (Lincoln Center Theater), Pericles  (Red Bull Theatre), Killing The Boss, Dog And Wolf (Cherry Lane & 59 E. 59th respectively),  and  I Remember Mama (Transport Group Theatre Company – New York Times top 10 shows of 2014). Regional: Candide (Guthrie), Wintertime, Landscape of the Body (Doug Hughes-Dir.), Caucasian Chalk Circle (Dan Sullivan-Dir.) and her one person show Chameleons (all Seattle Rep.), Paris Commune (La Jolla Playhouse), All’s Well That Ends Well (Yale Rep.), Gum, Macbeth (Center Stage), Doubt (Gulf Shore Playhouse). Television: “Unforgettable” (CBS), American Playhouse’s “Until She Talks,” “The Grapes of Wrath,” “Sesame Street,” Maurice Sendak’s “Really Rosie,” “Law & Order.” Film: The Messenger, Diggers, Motherhood.  Awards:  The New Dramatists Charles Boden Award (Dedication to New Work and Extraordinary Contribution to the Theatre.)