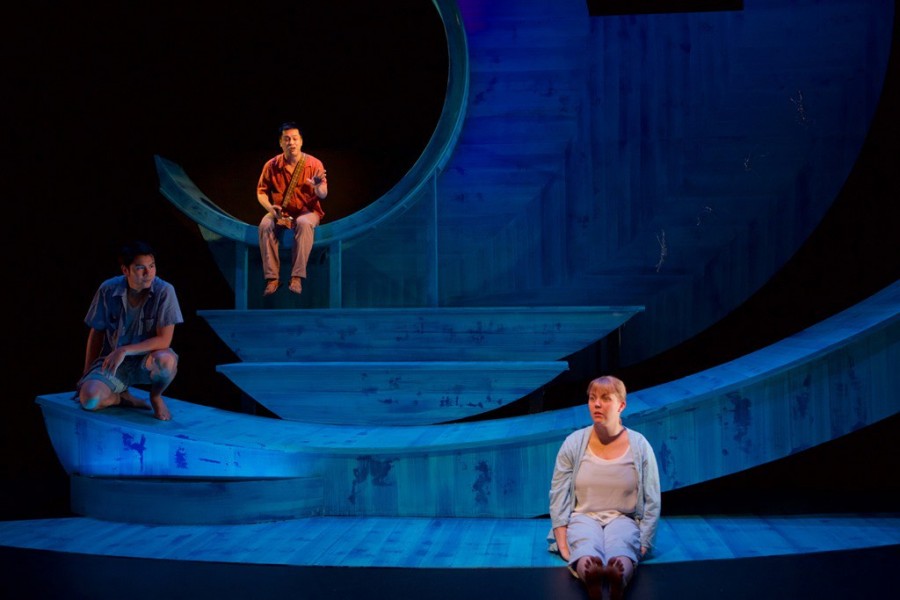 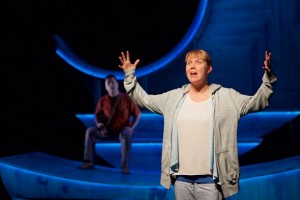 In Hansol Jung’s world premiere romantic comedy No More Sad Things, the theme of facing adversity resonates throughout. Sideshow Theatre Company and Director Elly Green presents this clever, comical, poignant and challenging new work, best described as How Stella Got Her Grove Back meets The New Girl. Adorkable girl meets native boy in a whirlwind tropical romance, then reality catches up to both of them. With rapid fire, ping-pong style, hilarious dialog, and a winning three person cast, No More Sad Things is a brisk 90 minute rom-com without the conventional happily-ever-after ending and it is a better piece because of it. 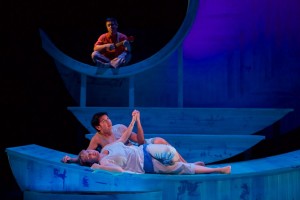 We begin our journey with 32 year old Akron, Ohio native, Jessiee (Katy Carolina Collins) maxing out her credit cards on a spontaneous vacation to Ka’anapali.  Jessiee desperately needed a break from her provincial life, playing nursemaid to her invalid mother has taken its toll on her soul and psyche. With her life imploding, she temporarily escapes to live “off the grid” for a week.   Vulnerable and empathetic, Collins makes Jessiee an extremely relatable and likeable everywoman an audience can easily connect with. Enter the handsome Kahekili (George Infantado) an island native and cliff diver, deeply connected with the ocean. After a chance meeting, the two surrender to their mutual attraction and make passionate, and comical, love on the beach. This vacation based romantic tryst is rocked when Jessiee learns her new beau is just 15 years old. Since the age of consent in Maui is 16, this one night stand is not only dangerous, it is illegal. However, that is not the crux of the remainder of show. Instead, we follow the rest of the new couple’s week, in vignette style, allowing this romance to blossom in non-linear, thematic, montage segments, peppered with hilarious hijinks including uncomfortable tampon jokes, the unending search for the perfect edible souvenirs, adventurous (off stage) cliff diving and an ever present background ringing telephone. The third and final member of this cast is known as “Guidebook” a ukulele strumming narrator/guide (Narciso Lobo) who also plays a half dozen supporting characters,  including an airline pilot, hotel concierge and a mysterious, dream state frog.  He both drives the action and often sets the scene’s tone. 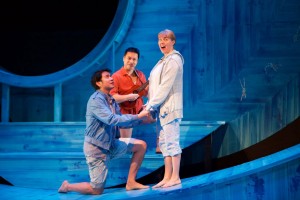 This triumvirate cast is surrounded by an ocean blue set, designed by William Boles, carved to mimic a large, cresting wave. Izumi Inaba’s real world costume design likewise follows a similar oceanic palette, understated turquoise and periwinkle layered tops and shorts. The narrator is the only bold color, adorned in bright orange, positioned onstage above the couple, like a rising or setting sun.  The effective lighting design by Diane D. Fairchild adds an additional layer to the island’s mystique. This sly new play, set to the backdrop of a forbidden romance, had a subtle undercurrent of sadness, which helped raise the stakes of all involved.  No More Sad Things’ title takes on a double meaning throughout the production. Life is messy and nothing a quick trip to the islands and a frozen umbrella drink can solve. Adversity is a hurdle which helps people develop and progress. Subtle lessons abound throughout, sometimes one has to fall apart only to reassemble better for the struggle. A thinking person’s romantic comedy which pushes the boundaries, you will leave No More Sad Things with a smile on your face from the raucous laughter, but the material will resonate with you for far longer. 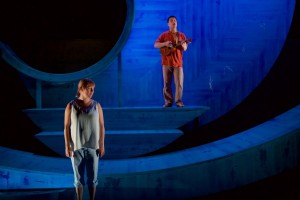 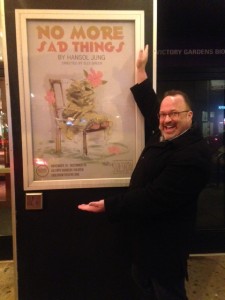 Suzanna BowlingFebruary 2, 2023
Read More
Scroll for more
Tap
Eric Bentley is Given A Birthday Celebration at Town Hall
Santasia Get Your Jolly On