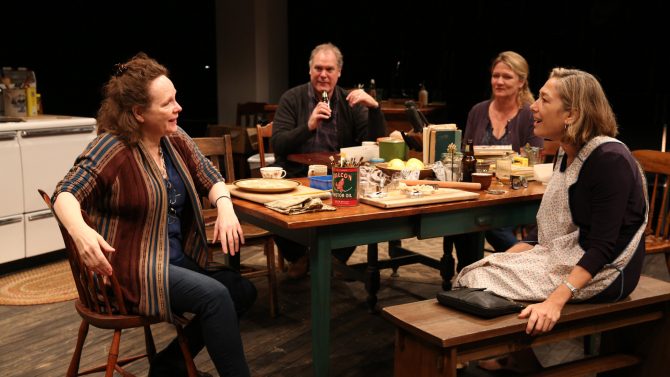 No One Is Alone In Women of a Certain Age

No One Is Alone In Women of a Certain Age 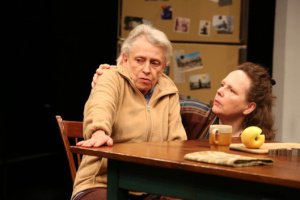 Women of a Certain Age, the third and final chapter of Richard Nelson’s The Gabriels: Election Year in the Life of One Family is highly relevant in today’s day and age. As The Gabriels cook yet another meal, fears and the looming end hang in the air. Now that the election has happened there is an air of sadness that hangs in the air. Like the election there was never any thought that Donald Trump could win in the course of the play. We watch as this liberal middle-class family in Duchess County, N.Y. are not only losing their home but the soon to be disappointment over the election. 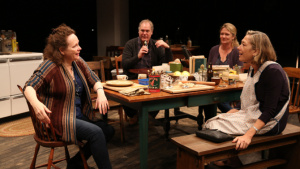 For the first time in The Gabriel plays, Nelson’s writing shows an elegance, as this time real issues are discussed. Healthcare, jobs, education, gender, gentrification and lack of income weave there way into the conversation.

The cast is all sublime and so real that even though you have always felt like you are peeping into something so intimate.

It has been one year after the death of novelist and playwright Thomas Gabriel who looms larger than life. His widow Mary (the nurturing and tender Maryann Plunkett), her late husband’s sister Joyce (Amy Warren), their brother George (Jay O. Sanders) and his wife Hannah (Lynn Hawley) are prepare a family dinner. Thomas’ elderly mother Patricia (Roberta Maxwell) has joined having been given a reprieve from her assisting-living facility. Thomas’ first wife Karin (Meg Gibson), a teacher and sometime actress is there now that she is renting a room above the garage. The family is losing the house due to a reverse mortgage taken out by Patricia. Mary, has lost her license to practice medicine and can’t move on after her husband’s death. Patricia is lucid, but helpless, tired thanks to age and her care has become unaffordable. Karin’s lives in solitude and Hannah has had to take part-time housekeeping work at a local hotel. The dire financial situation of the Gabriels means the college education of George and Hannah’s son is in jeopardy of not having the funds to go to college in a family who is highly educated.

There is a sadness in watching this because the  “unthinkable,” has happened.