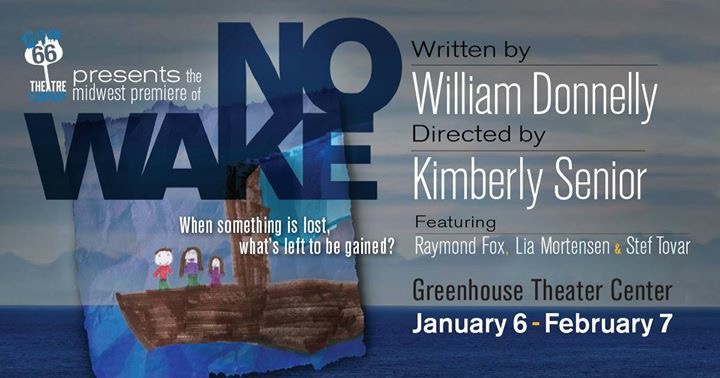 No Wake – An Unexamined Life Is Not Worth Living

No Wake – An Unexamined Life Is Not Worth Living 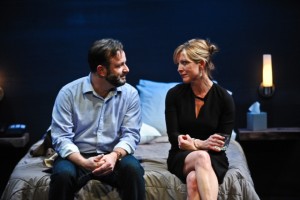 Intimate, confrontational, unflinching, the dramatic fusion of the three are at the core of Route 66 Theatre Company’s Midwest premiere of the challenging new play, No Wake. A cast of three actors, at the top of their game, brought William Donnelly’s complex words to life. Directed by Kimberly Senior, No Wake engaged on several levels. Reunited for the starkest of reasons, a memorial service for their daughter, a troubled young lady who took her own life. A couple must face down the demons that inevitably tore their relationship apart. With resolute conviction, peering into the darkness, then into the light and back again. The tight pacing of this 80 minute, one act drama, is all that is necessary to serve this unyielding character study. 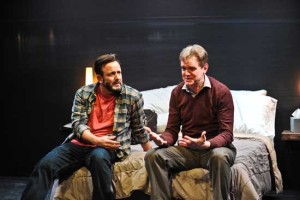 As the story began, 2 men, Roger (Raymond Fox) and Edward (Stef Tovar) shared a drink at a local pub, reflective of their days. Enter Rebecca (Lia Mortensen) and the ambiguous details of the narrative become laser point crisp. Roger is the current husband and Edward is her ex. The three are joined, reunited really, at the memorial service of their child, Sukie Nolan. The action here began to take place immediately after the funeral. We never actually meet Sukie, but we do learn she was a troubled young lady, argumentative toward both of her estranged parents, prone to lashing out and running away. Sukie’s demise drove the remainder of this production. Later that same evening, Rebecca storms Edward’s hotel room demanding answers. Answers about the demise of their relationship and the importance of their daughter in both of their lives. It is within these scenes the play sparks with a truest fury and fervent electricity. The chemistry between Tovar and Mortensen is truly palpable. Grief, regret, rage, the dialog difficult and brutal as these two negotiate through their collective and individual grieving process. “Everything that was wound so tight went slack, and I felt relieved. ” It wasn’t long before the intensity of their words lead to action as the two reconnected amorously in a Jacuzzi offstage. 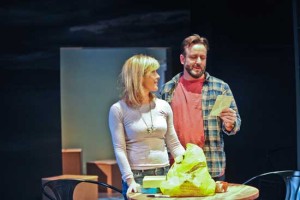 The tightly deconstructed love triangle crafted over a daughter who committed suicide sounds both bleak and depressing. While this may be ture, there are moments of great levity and humor on display as well. The following day Roger confronts Edward over the affair and the two men engage in a laughable and ridiculous round of fisticuffs, which ended with the two middle-aged men on the floor, winded more from their attempted tussle then from either actually landing a punch. The amusing fight choreography staged by John Tovar. Both men not excited to share the collective circumstance each of their lives had been molded for them by a bossy and controlling woman. She being described as an “emotional extortionist.” Supporting the rapid fire, intense dialog, scenic and lighting design by Brian Sidney Bembridge. The simple set doubles as a hotel bedroom and the daughter’s apartment where both estranged parents are tasked to sort and empty their daughter’s possessions. Alarie Hammock’s costume design also impressed, particularly Mortensen’s black dress with a large metal neck piece and matching stilettos, giving additional edge to a commanding characterization of a mother desperately seeking answers to sooth her own wounded and damaged psyche. 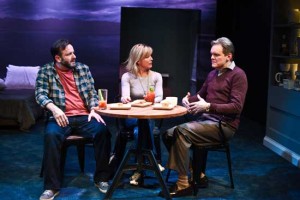 As for the title, No Wake, the eternal calm of water could symbolize the passing of the daughter, her suggested torment and anguish purposely ended by suicide. Her parents exclaimed “I feel bad that I am breathing” at the climax of the story, walking wounded survivors, which lead me to believe that is not the writer’s intention. “No Wake is not my dream” are the final words uttered, unnerving in the rawness of the moment.  It is important and necessary to live a life of making waves. Impacting on those we elect to surround ourselves with. Much like the three at the center of this production did with their entranced audience. No Wake isn’t the easiest play to sit through, but you will be rewarded by the fact that you did.

Route 66 Theatre Company’s No Wake plays at the Greenhouse Theatre through February 7, 2016