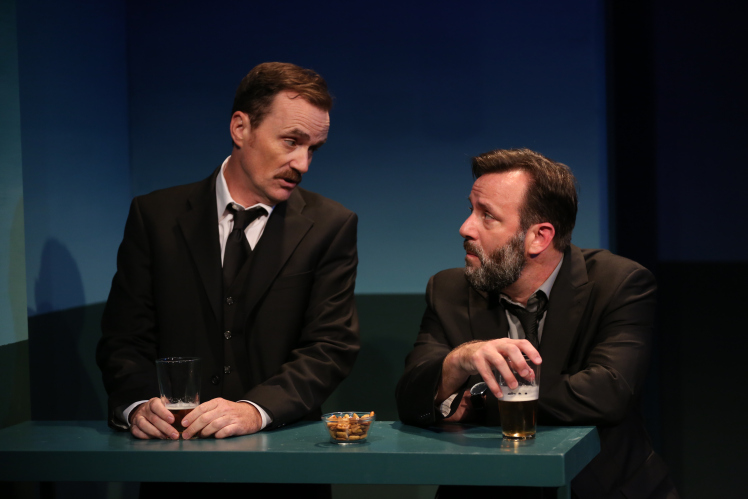 No Wake: Drowning In The Current, and In Life

No Wake: Drowning In The Current, and In Life 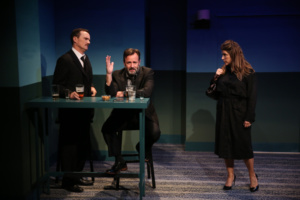 The title of William Donnelly’s compelling new play, No Wake at 59E59 Theaters, courtesy of Route 66 Theatre Company and Bella Vista Entertainment, has a two fold meaning. It’s a play on the word and a strong metaphoric direction to the characters in this solid relationship drama. The term, ‘wake’ has to do with the funereal event and also a sign to boats in the water to be careful. It is a cautionary warning to these three interconnected characters as they attempt to move forward in their world.  The play is more about surviving rather than mourning, and although all three characters in No Wake are trying hard to deal with tragedy, Donnelly has more to say about being tested and challenged in a matrimonial relationship.  As directed by Veronica Brady (Malibu Playhouse’s Butterflies Are Free) with an edge to humorous and real interplay, No Wake is layered with authentic and touching moments flowing through the undercurrent.  Even with the disappointment to come in the final ten minutes, the characters are soaked in authentic reactions and attachment.

A formerly married couple have come together at an inn in Camden, Massachusetts for an achingly sad funeral (solid work by the design team of set: Tom Buderwitz; costumes: Michael Mullen; lighting: Brian Tovar; and sound: Lindsay Jones).  Nolan, played with a nervous sad twitch by the talented Stef Tovar (59E59’s A Twist of Water) finds himself defeated and trembling with sadness over this personal tragedy, while also at a crossroads with his current girlfriend. Trying to numb himself at the inn’s bar, he is finds himself in the company of his ex-wife’s current husband, Padgett, expertly played by the gifted Tim Ransom (Hulu’s The Handmaids Tale).  It’s a funny and lovingly written moment between these two very different men, and it only breeds an understanding of them both.

Suzanna BowlingSeptember 17, 2021
Read More
Scroll for more
Tap
Among The Furies and Social Studies Split $3500 Prize At NYSummerfest 2017 Award Ceremony
The Show-Off Grates on the Nerves