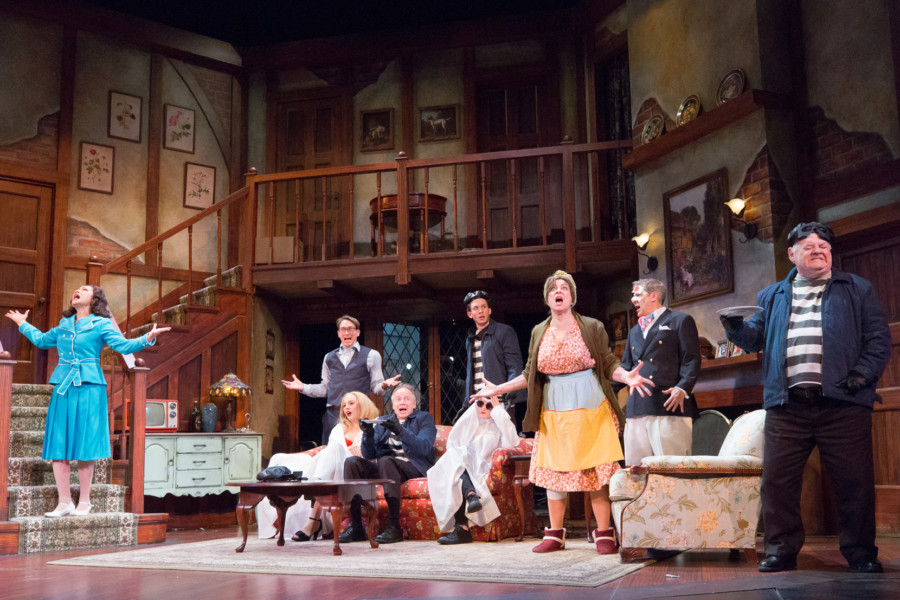 Noises Off An Old Chestnut at the Walnut

Noises Off An Old Chestnut at the Walnut 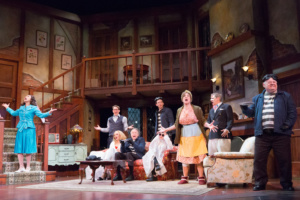 Noises Off, which is currently running at the Walnut Street Theatre, is what you might call an old fashioned play. It’s a three actor, which one rarely sees anymore. A play by British playwright, Michael Frayn who hatched the idea in 1970 while watching a performance of a farce he had written for Lynn Redgrave from the wings. He felt that is was funnier from behind the scenes than in front and that one day he should write a play about it. Well, he did. The play premiered at the Lyric Theatre, Hammersmith, London in 1982 and opened at the Brooks Atkinson in 1983 running for 553 performances and winning a Drama Desk Award for Outstanding Ensemble. 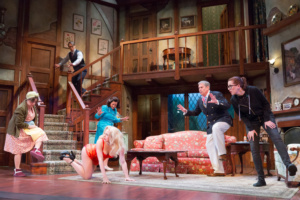 Each of the three acts contains a performance of the first act of a “play within a play”, a sex farce entitled, Nothing On. The first act takes place at the technical rehearsal the evening before opening night and things are not going well. Lloyd Dallas, the director is frustrated with having to baby his needy actors and having to dance around their complicated relationships. Though there are a few laughs, Act I is rather sedate. It is for all intents and purposes one, big, giant set-up for the next two acts.

After intermission (where we wonder what’s so funny about this play), we witness Act II which takes place a month later backstage at a matinee performance, where all that exposition in Act I pays off in about a laugh a minute. For Act II puts the cast through non-stop, highly physical comedy, which if they aren’t all exhausted by the end of it; we are certainly exhausted from laughing. The curtain falls on Act II, the curtain rises and the set revolves back to the front view of the set. Then Act III takes place after the show has been on tour for two months. The cast is worn out. Actors flounder on stage, miss cues, miss entrances and don’t really seem to care. Act III (which in the program is billed as Scene 2 of Act II as there’s no intermission.) is basically a denouement. And though it is funny, it simply cannot scale the hysterical heights of Act II.

Be that as it may, this talented cast gets put through their paces every performance. Mary Martello as the little bit dotty, Dotty, a middle-aged television star that’s bankrolling this production is the most down to earth and seemingly sane character amid the rest of this hyperbolic crew of actors. Greg Wood, (Lloyd Dallas) plays the exasperated director who is driven to his wit’s end by the flubs and foibles of his cast, including the two female members of the cast (Brooke & Poppy) he is embroiled with. Ben Dibble is expert at hopping up a flight of stairs and falling down them as well, as Garry Lejeune, the actor who can never finish a sentence unless it’s written dialogue. Alanna J. Smith is very good at being a very bad actress (Brooke Ashton) though no one cares as she looks so good in her underwear. Leonard C. Haas is appealingly pathetic as Frederick Fellowes who gets superglued to his taxes and a plate of sardines while dropping trou. Susan Riley Stevens is elegant as Belinda Blair, the peacemaker of the group who is a bit of a gossip monger and ultimately sets disastrous things in motion. John P. Connolly is good for many belly laughs as Selsdon Mowbray, the half-deaf, alcoholic actor who plays the burglar and misses many a cue. And Lauren Sowa and Danielle Frederick are quite amusing as the overworked and undervalued stage managers.

The massive double-sided set by Robert Koharchik is delightful as the Brent’s country home on one side and backstage on the other, though it seems a bit cumbersome to rotate. If you like slapstick, slamming doors, prat falls and racey pantomime – you’ll enjoy this madcap production.