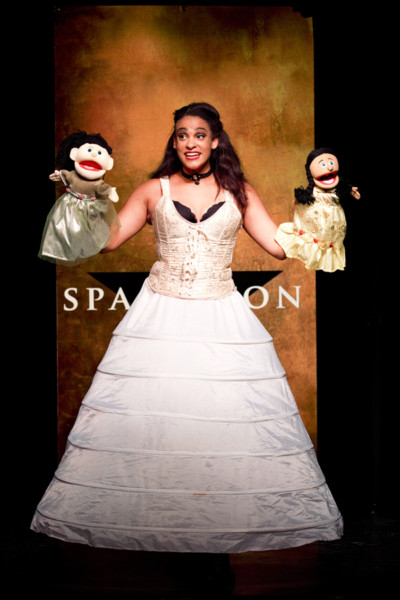 Following a run of nine months packing audiences in at The Triad on W. 72nd St., Spamilton, the comedic musical take on all things Hamilton and Broadway, announced its move to 47th Street Theatre/The Puerto Rican Traveling Theater with performances beginning June 2nd, 2017. The show’s move to Off Broadway puts it just a stone’s throw from the theater housing its inspiration and main punchline. The show is set for an open engagement.

In addition to the Off Broadway move in New York City and the recent launch of a Chicago production, Spamilton will get its West Coast premiere at the Kirk Douglas Theatre.  Produced in Los Angeles by Center Theatre Group, Spamilton will run November 5 through December 31, 2017, with opening set for November 12. That production will launch a national tour with additional cities and dates to be announced.

The new iterations in Chicago, New York, and Los Angeles will also see some updates to the show, keeping the references, music, and jest current and relevant to this crowded Broadway season.

“We’re very excited about expanding the show a bit,” Spamilton creator Gerard Alessandrini said.  “We will also be adding up-to-date references to Hamilton, Lin-Manuel Miranda, and their impact on the current Broadway season. So look out Glenn Close, Bette Midler and Evan Hansen!”

Alessandrini is no stranger at 47th Street Theater/The Puerto Rican Traveling Theater, having had successful engagements of the critical sensation Forbidden Broadway produced there from 2005 to 2009, and again from 2012 to 2013.

“We are thrilled to be working again with everyone at 47th Street Theater/The Puerto Rican Traveling Theater” Alessandrini said. “Miriam Colón was a great friend, and she and I were long admirers of each other’s work. We are heartened to be collaborating with her organization, and are looking forward to adding to the fun, multicultural elements of Hamilton, which both match the traditions of Puerto Rican Traveling Theater, and are celebrated and spoofed in Spamilton.”

While Spamilton is an entirely new creation from Alessandrini, it still boasts the familiar satirical humor of show tune parodies and Broadway raillery.  No one on Broadway is safe in this uproarious production, making 47th Street Theater / The Puerto Rican Travelling Theater’s proximity to its ‘victims’ a perfect fit.

“Welcoming Spamilton into our home on 47th Street is a tribute to the 50+ year history of showcasing original works and to the partnerships we have built along the way.” Said Rosalba Rolón, Artistic Director.  “Miriam Colón, the late Founder of the Puerto Rican Traveling Theater/47th Street Theater, found immense joy in one such partnership: the artists/producers who created Forbidden Broadway. She would have been thrilled to learn that we have developed a new and collaborative vision for the continued success of their latest adventure, Spamilton.”

For complete performance schedules, tickets, and pricing for New York and Chicago, you can visit www.spamilton.com.  For additional information about the Los Angeles production, please visit www.CenterTheatreGroup.org.

The Puerto Rican Traveling Theater, located on 47th St. in Manhattan, is the Off-Broadway go-to stage for Latinx and Latinx-themed productions in the Subdistrict. Having recently merged with The Bronx’s Pregones Theater, the company has created the Bronx-Broadway Showcase for Latino Theater. With a combined 200 theater premieres, 400+ guest artists, and more than 500 travel credits to date, the company’s repertoire is known for mining connections between theater and popular culture, creating original musical theater and plays rooted in Puerto Rican/Latinx cultures. Guest artists who share our twin commitment to the arts and civic enrichment are presented year round on both stages.

Center Theatre Group, one of the nation’s preeminent arts and cultural organizations, is Los Angeles’ leading nonprofit theatre company, programming seasons at the 736-seat Mark Taper Forum and 1600 to 2000-seat Ahmanson Theatre at The Music Center in Downtown Los Angeles, and the 317-seat Kirk Douglas Theatre in Culver City. In addition to presenting and producing the broadest range of theatrical entertainment in the country, Center Theatre Group is one of the nation’s leading producers of ambitious new works through commissions and world premiere productions and a leader in interactive community engagement and education programs that reach across generations, demographics and circumstance to serve Los Angeles.