Nora York Lives With the Release of Swoon 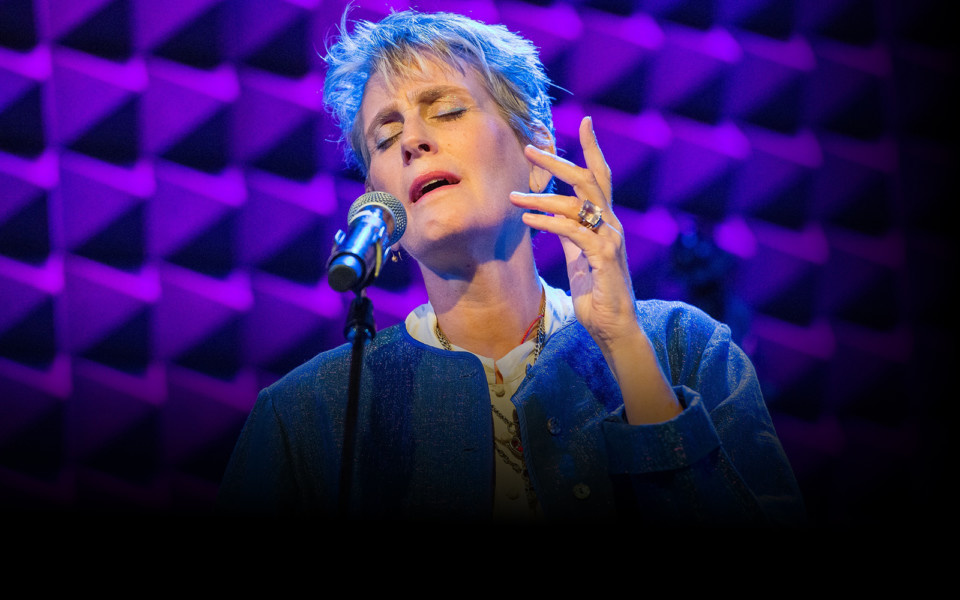 Nora York Lives With the Release of Swoon

Good Mood Records will celebrate the vocalist and songwriter Nora York with the album Swoon, featuring unreleased, never-before-heard compositions and interpretations of pop classics, on Friday, October 4. The posthumous release is produced by and features her collaboratorJamie Lawrence. York, hailed as “an ingenious, radical, extravagant talent” by The New Yorker and “singer-songwriter-truthteller” by The Village Voice, was renowned for her soulful voice and hypnotic stage presence, in addition to her original songs and thought-provoking musical juxtapositions of contemporary jazz and pop music. Swoon, which features artwork by Nora’s husband and artistic collaborator  Jerry Kearns, will be available on all digital and streaming platforms, and on CD from CD Baby. A tribute concert will be held at Joe’s Pub at The Public Theater, on Monday, October 7 at 7:00 PM.

“I first met Nora in 2002,” explains Lawrence. “She was ready to put out a new album, and she thought I was the person to produce it, although we had never properly met. We hit it off and worked together on many projects and a lot of special music, until she tragically passed away from pancreatic cancer in 2016.

“After the album What I Want,” Lawrence recalls, “Nora kept coming up with ideas for albums and music theater shows, and we kept recording songs. We never actually finished another record, as Nora was onto the next project before the previous one had fully flowered. When I first met Nora she thought of herself as a song interpreter/mash-up artist first, and a songwriter second. I encouraged her to focus more on original material.”

Swoon is comprised of the songs that Lawrence encouraged York to write. “Amelia” was a test song for a musical she imagined about Amelia Earhart. “Earliest Memory” and “Rain Came Down” were written for a theatrical musical evening about climate change that was workshopped at the BRIC Arts center in Brooklyn.

York and Lawrence wrote “Rome Is Burning,” originally for a music theater piece titled Jump, which was about Sarah Bernhardt and the creation of the French play Tosca. Jump was commissioned by the New York State Council for the Arts, and The Public Theater in New York produced multiple workshops before Jump premiered in the Under the Radar Festival in 2011. The piece was a collaboration with playwright David Greenspan, director JoAnne Akalaitis, and artist Kiki Smith.

The beautiful ballad “In the Morning” features the band in extended solos. Lawrence elaborates, “Nora came from a jazz background and was very comfortable letting musicians solo behind her on stage. She seems to be describing the ups and downs of any kind of artistic life. Sometimes you can’t get out of bed, sometimes everything is going your way. The rollercoaster never stops.”

Lawrence adds, “Two songs on this album were put together in a single afternoon. ‘All Down Hill from Here’ was a demo for season two of the TV series ‘Klimawechsel’ that Nora’s dear friend Doris Dörrie had written and directed. ‘Rainstorm in June’ was expanded from the theme song we wrote for the first season of ‘Klimawechsel.’ ‘Money Money’ is Nora’s cutting but again humorous take on the almighty dollar.”

“The album also includes two covers that I think represent Nora at her finest as a song interpreter,” he continues. “It opens with a unique Yorkian take on the Elvis Presley classic ‘All Shook Up,’ at once ferociously sexy and feminine but also playful with tongue firmly in cheek. Sung against a sparse accompaniment of acoustic guitar, bass and melodica, her voice dips and soars like a woman in the throes of a late blooming Elvis crush. Her version of Prince’s eternal ‘Nothing Compares to U’ was originally a demo for another singer to perform. When I went back and listened, I decided to put it out just the way we did it that afternoon, with no extra sweetening.”

Swoon closes with “The Hill,” a gorgeous country-inflected song that was cut from her What I Want album. “It’s bittersweet that Nora’s touching lyric and the plaintive accordion of Charlie Giordano – a longtime member of Bruce Springsteen’s band – finally get their due,” Lawrence concludes. “As I edited and mixed these tracks, Nora’s voice emerged from my speakers, just as present and alive as if she were just now in my vocal room 15 feet away. I miss her.”

Jerry Kearns, her husband and collaborator on the acclaimed visual/performance piece Diva’s Song, reflects: “Nora worked across genres of music, combining disparate histories and sounds. She remixed music history to create an emotional platform for her intelligent narrative about the world around her. Several writers referred to Nora as a ‘Philosopher Diva.’ Nora’s art is based on her belief in song as a central carrier of our deepest emotions and highest thoughts.”

Nora said it best in Diva’s Song when she quotes Puccini’s Tosca: “I’ve lived my life for art. I lived for love. I lived for joy, to ease breaking hearts with my song.”

“Since emerging from New York’s Knitting Factory jazz scene in the late ’90s, Nora York has

ignored musical boundaries. She has no use for the words ‘musical genre.’ York stands tall and proud

Nora York (1956–2016) was an adventurous jazz singer and performance artist whose genre-crossing work defies easy categorization. Her concert work Power/Play was commissioned by the Brooklyn Academy of Music and performed at the 2006 Whitney Museum of American Art Biennial. York has headlined at the Newport Jazz Festival, Ottawa Jazz Festival, JVC Jazz Festival, New Sounds Live at Merkin Hall, and Lincoln Center Out of Doors, for which she received a “Meet the Composer” grant. In 2013, she received a Robert Rauschenberg Foundation grant to compose and perform a song cycle as part of Marfa Dialogues/NY, an interdisciplinary citywide series on Climate Change. She won the Franklin Furnace “Future of the Present” grant for her collaboration with artist Nancy Spero and her piece “Bad News!” was presented at the 2013 River to River Festival New York.

York composed and recorded for television shows on A&E, Showtime, PBS, HBO, and “Klimawechsel,” the award-winning television series from German filmmaker Doris Dörrie. She also contributed to four of Dörrie’s feature films, including The Fisherman’s Wife, whose soundtrack was released by Virgin Records/EMI.

In 2005, music historian W. Royal Stokes featured a profile on York in the “Visionaries and Eclectics” section of Growing Up with Jazz, from Oxford University Press. In addition, York’s TED Talk was presented in 2009 and she served as vocal coach for Clive Owen for the HBO series “The Knick.” Her previous albums include What I Want (2005); Alchemy, written with Grammy Award-winning composer Maria Schneider (1999); and To Dream the World (1995).

Jamie Lawrence is a composer/pianist whose career has involved scoring film and television projects, music direction for live TV broadcasts and record production as a song writer, producer and mixer. His compositions and arrangements have been honored with five Emmy Awards and ten Emmy nominations. In the film world where he recently produced and orchestrated the score for the HBO documentary Arthur Miller: Writer,directed by Rebecca Miller; and contributed music to the documentary Patrimonio, directed by Lisa F. Jackson and Sarah Teale. Jamie wrote the score for Bart Got a Room, starring William H. Macy; and produced the music for Maggie’s Plan, starring Julianne Moore and Ethan Hawke; The Private Lives of Pippa Lee, starring Alan Arkin; The Ballad of Jack and Rose, starring Daniel Day Lewis; and Music of Regret, starring Meryl Streep. He has scored numerous documentary films, many of them for HBO: Death on a Factory Farm, The Alzheimer’s Project: Momentum in Science, Dealing Dogs, and Shot in the Dark, directed by Adrian Grenier.

He has written all the original music for the Tony Awards broadcasts for the past ten years, as well as being its Music Director/conductor and a principle arranger. The 2012 Tonys won the Emmy Award for Outstanding Music Direction in a Variety Show, and Jamie conducted the 2013 opening number “Bigger” with Neil Patrick Harris. As an orchestrator and arranger he has penned arrangements for Jessye Norman, Quincy Jones, Smokey Robinson, Audra McDonald, and Herbie Hancock. He is a writer/performer of children’s songs under his alias, Jamie Broza. His CD Bad Mood Mom and Other Good Mood Songs, made the Parents’ Choice Foundation’s list of the top 25 Children’s CDs in the last 25 years.

7. Nothing Compares to U

“Nora York was an absolutely unique artist, one whose commitment to experimentation was matched with a voice of unworldly beauty. She was a great singer, a great artist, and a luminous human being.” – Oskar Eustis, Artistic Director of The Public Theater

“Nora’s music is infused with intense compassion for the planet—its environment and its people—and an absolute dedication to creating something of beauty. She was a true artist and a dear lady.” – David Greenspan, Obie Award-winning Actor and Playwright