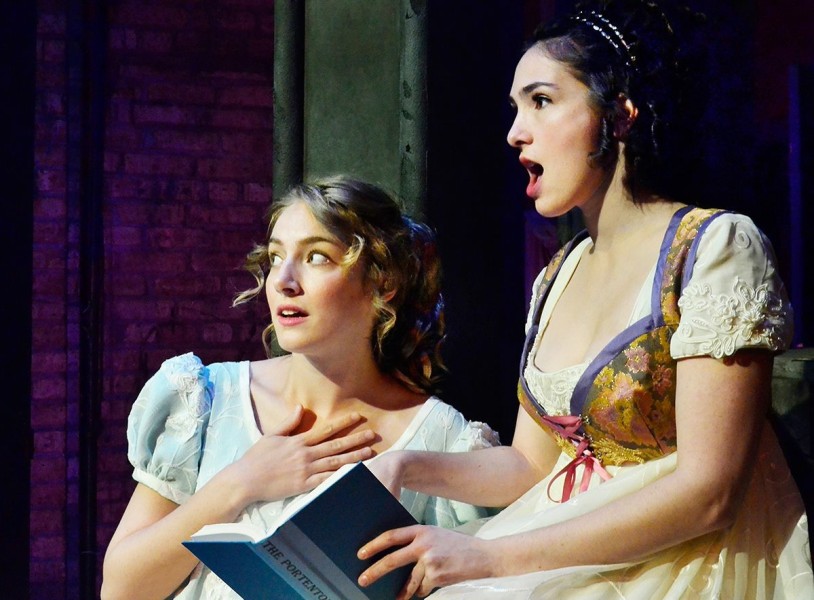 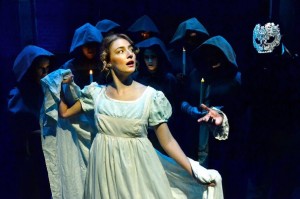 What a delightfully refreshing surprise coming from Roger’s Park’s Lifeline Theater. The world premiere musical, Northanger Abbey, the brainchild of playwright Robert Kauzlaric and songwriter George Howe, is as engrossing as it is entertaining. This reimagining of Jane Austen’s earliest novel, Northanger Abbey, is the most romantic of comedies. The rom-comiest of Windy City rom-com’s, as it were. All the familiar Austen nuances are squarely on display. The thrill-seeking heroine born before her time, romantic dalliances between members beyond their life’s station, and the wonderfully intellectual witty banter that completely captivates. I must be honest, director Elise Kauzlaric and her dedicated troupe have mounted a full-scale musical in a rather intimate space, so adjust your expectations accordingly, then enjoy. The story itself is both delightful and highly imaginative. 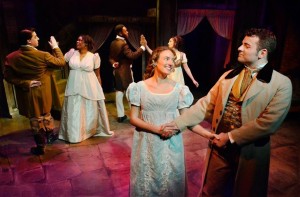 Set in Gloucestershire, England, the story centers around Catherine Morland (Stephanie Stockstill) a lovely, vulnerable, naïve, yet adventuresome bookworm. “Since 15, I’ve been in training for a heroine” she exclaims breathlessly. Leaving her provincial country home behind, Catherine sets forth for adventures in the city. 1798 springtime, Bath, England to be exact. Enjoying her new existence in a world of posh gatherings, wealth, and social climbing high society, romance is on her immediate horizon. “I’ll be the author of my own enlightened page” she retorts while auditioning potential beaus. Catching the eye of handsome suitor, Henry Tilney (Javier Ferreira), befriending his sister, Eleanor (Shelby Lynn Bias), and with the permission of her meddlesome Aunt, Mrs. Allen (the always delightful Jenifer Tyler) a scene stealing extraordinaire, Morland is invited to be a guest at stately Northanger Abbey, where the real Gothic adventure jumps from the page to the stage. If act one establishes a burgeoning young romance, act two meshes both fantasy and reality, as Catherine’s expectation of supernatural delights in the Abbey segues into a reality both frightening and engendering to our fledgling protagonist. Think an Elizabethan Nancy Drew, with the voice of Kelli O’Hara and the charm of Jennifer Aniston. 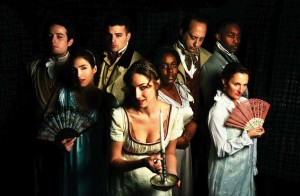 The creative team behind Northanger Abbey included ambitious choreography from Todd Rhodes, period scenic design by Sarah Lewis, and dramatic lighting by Diane D. Fairchild. Aly Renee Amidei made the most of her shoestring costume budget with feminine empire waist gowns for the women and chivalrous top hats and high collars on the men. Music director Ellen K. Morris and her trio orchestra, a cellist, violinist and pianist accompanied a bevy of exquisite new songs. “A Woman’s Reputation” sung by the busiest of busy bodies, Jenifer Tyler’s Mrs. Allen, the lovely “A Mother Would Have Been A Constant Friend” by Shelby Lynn Bias’ Eleanor and the “The Symmetry of Flowers” stand out amongst the others. For those missing the PBS historical drama and shenanigans of the Emmy winning, Downton Abbey, Northanger Abbey, more than fills the void. Already extended once, catch this rare gem before it goes back on the bookshelf with Austen’s other classics, Pride and Prejudice and Sense and Sensibility. Let’s hope this is not the last we hear from this creative team, as I found Northanger Abbey one of the biggest little surprises mounted this summer. 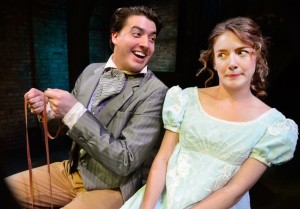