Not Everything Mixes Well in Caroline’s Kitchen﻿ 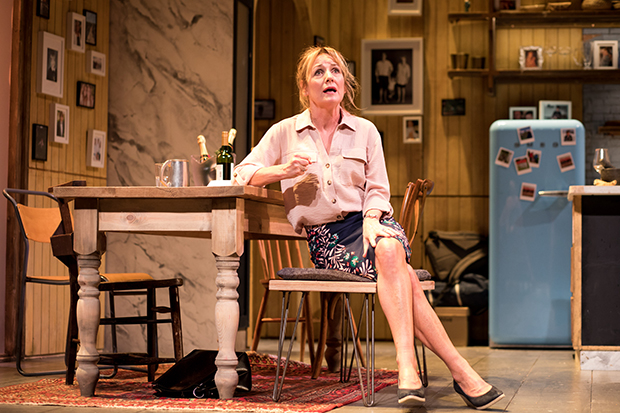 Not Everything Mixes Well in Caroline’s Kitchen﻿

Torben Betts’s Caroline’s Kitchen, tires too hard to be like Alan Ayckbourn and though it has much to say it becomes muddled in translation.

Nobody here is truly likable, so when the destruction and mayhem take place, you are cheering rather than feeling sorry for the lot .

We immediately meet Caroline Mortimer (Caroline Langrishe), the Rachael Ray of England. Hosting her live cooking show from her posh North London home. Adored by millions, Caroline is suppose to be happily married and the epitome of domestic bliss and she is anything but. Caroline and the handyman Graeme (James Sutton) are having an affair, her son, Leo (Tom England), newly graduated from Cambridge wants her to tell his father he is gay and some compromising photos of an drunken Caroline are about to be posted by the Daily Mail.

Caroline’s assistant Amanda (Jasmyn Banks) is none too helpful and Graeme’s wife (Elizabeth Boag) has just shown up. Her banker husband, Mike (Aden Gillett), suffering a mid-life crisis hasn’t a clue and an English rain has turned biblical, as she is trying to sell this expensive property.

Ironically this flood seems to be clearing out the cobwebs of these desolate horrible people. Mike likes to humiliate his wife, Amanda has a huge cocaine problem, Leo is an over privileged prig, who cares nothing for anybody, Graeme is cheating on his suicidal, mentally challenged wife and Caroline is self righteous, not seeing her own destructive behavior.

Langrishe and Gillett are simply not believable. Both are doing over the top performances trying to right this play and at times succeed, but never are grounded. Who manages to impress is Sutton, who at least makes us believe he is truly in love with Caroline, despite the horrific circumstances. You almost feel sorry for him when Caroline tells him it was only physical.

Director Alastair Whatley should have stuck to a recipe, because it seems like ingredients are missing.

James Perkins’s set, is well done. Sound designer Max Pappenheim makes us fear the storm outside. Lighting designer Chris Withers does not seem to know the sky should get dark and ominous when this kind of storm is approaching.

Caroline’s Kitchen is filled with an abundant of issues but they all seems like last decade. Maybe this would make a better sitcom, as not all recipes are gourmet.

Caroline’s Kitchen: Original Theatre Company at 59E59, until May 25th.