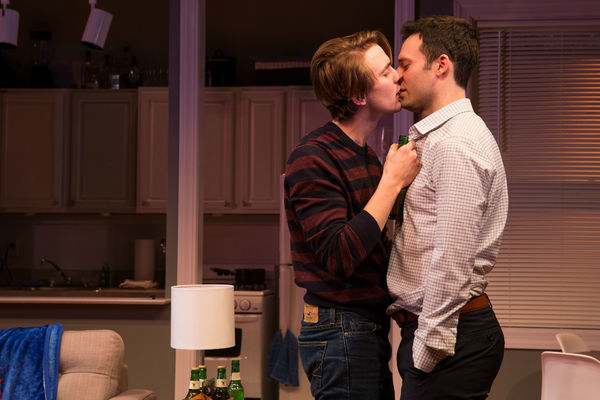 Scott Elmegreen and Drew Fornarola’s Straight, is anything but. Billed as a love triangle, it is really about Ben’s (Jake Epstein) coming to grips with his sexuality and the people he hurts along the way. He stays in the closet, so to speak due to his inability to tell the truth. He lies to his longtime girlfriend, Emily (Jenna Gavigan), a Ph.D. candidate in genetics and bioinformatics, sneaking moments of closeness with Chris (Thomas E. Sullivan), a college student who needs more than he can admit to. 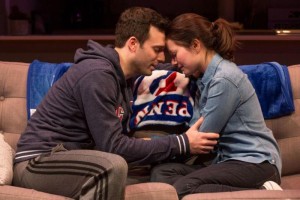 One has to wonder where the writers were coming from when they wrote this. Nobody truly wins and everyone if the play were to continue would lose a great deal, except of course Ben who in the long run would come to grips with who he is.

Mr. Epstein (Gerry Goffin in Beautiful: The Carole King Musical) does well as the passive-aggressive, 26 year old investment banker who gets to live in the best of both worlds). Though the lines state he is torn, Mr. Epstein shows his concern is only for himself, which is a truthful way of portraying this man. Ms. Gavigan is given little to do, but she is believable as the girl who does not want to lose the man she loves. The winner here is recent NYU graduate Mr. Sullivan, who is funny, endearing, sympathetic and wins our hearts.

The insight into Ben and Chris’s growing friendship rings true and we see the appeal. Ben and Emily’s relationship comes off less defined, except for her wanting the relationship to move forward at a faster pace. The script ends up making her whining, needy and sexually frigid. The direction by Andy Sandberg adds to this one sided look at a man who doesn’t care about anyone else but his own needs.