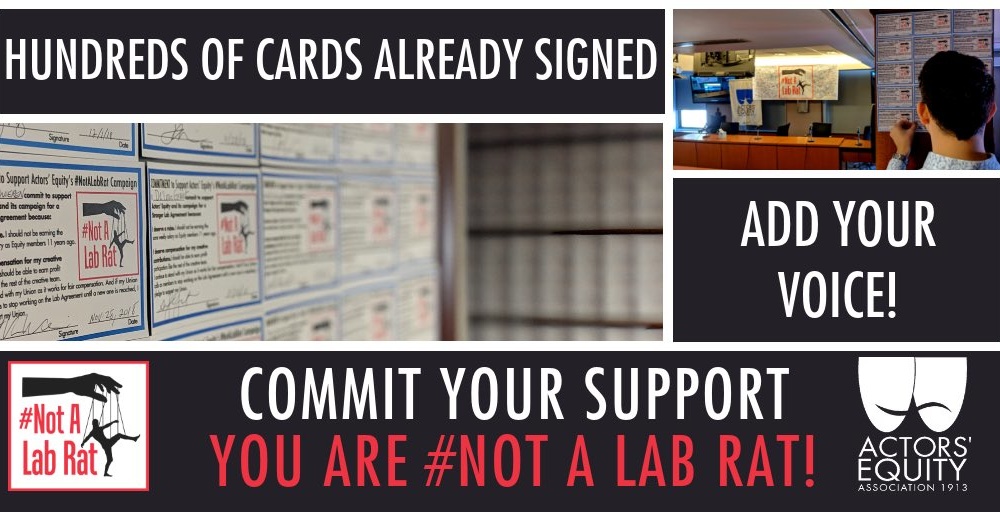 The Lab Agreement with the Broadway League is a contract used for the development of new productions, often musicals. Weekly salaries on the agreement have been frozen since 2007. The strike was authorized by Equity’s National Council and follows media reports that 2018 was Broadway’s highest-ever grossing year on record.

With the strike, Equity has placed its Lab Agreement, Workshop Agreement and Staged Reading Contract and Stage Reading guidelines with the Broadway League on its DO NOT WORK list. Any Equity member who is offered work on any developmental agreement, produced by a Broadway League member producer, should contact NotALabRat@ActorsEquity.org

Some Broadway shows – such as Frozen and Mean Girls – already offer to share profits with Equity members who worked to bring their productions to life during development on the Lab Agreement. Despite this, the Broadway League has refused to agree to profit sharing as part of the new contract.

“It’s unconscionable that Equity members who go to work developing some of the biggest hits on Broadway have gone more than a decade without a raise, especially when we regularly read about many of those same shows smashing box office records and generating billions of dollars in revenue,” said Kate Shindle, President of Actors’ Equity Association.

“An unprecedented number of Equity members have already volunteered to support our campaign for a better Lab agreement,” said Mary McColl, Executive Director of Actors’ Equity Association. “We will continue our fight to make sure that Equity members can share in the success when a show becomes a hit and recoups.”

Equity’s Lab Agreement is a key part of how commercial theatre – mostly musicals – are developed. One in four Broadway shows have used a Lab Agreement before opening on Broadway. The Lab Agreement has been used 75 times since 2016. 51 percent of those Labs went on to further production.

Equity launched its #NotALabRat campaign in November, kicking off its largest member mobilization effort in years. More than 2,000 Equity members – most of them actively working in Broadway shows – have signed commitment cards to support their union. Equity members have volunteered and made more than 9,000 calls to their fellow members to support the campaign. Click here to learn more in the campaign’s introductory video.

Actors’ Equity Association , founded in 1913, is the U.S. labor union that represents more than 51,000 professional actors and stage managers. Equity endeavors to advance the careers of its Members by negotiating wages, improving working conditions and providing a wide range of benefits (health and pension included). Member: AFL-CIO, FIA. www.actorsequity.org  #EquityWorks