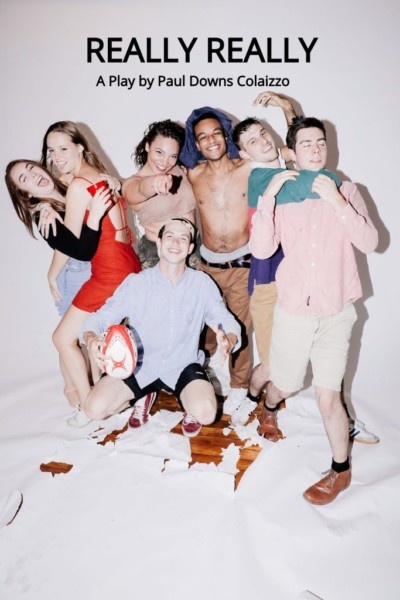 I first saw Paul Downs Colaizzo’s Really Really at MCC in 2013. Last night an ensemble of NYU Tisch School of the Arts alumni presented the work at the NY SummerFest and it was well done. Co-directors Meghan Mulcahy and Reilly Johnson, created an atmosphere of dorm life that seemed real and went against stereotypes.

The play begins with roommates Leigh (Reilly Johnson) and Grace (Natalie Shinnick) stumbling into their apartment drunk. The next morning, blood has covered the sheets from Grace’s fall onto broken glass. She is headed off to a conference for “Future Leaders of America”, but before she leaves she wants to hear all about Leigh’s night with Davis (Augustus Oicle), the boy she has been crushing on all year. Leigh, is the girl from the wrong side of the tracks, while everyone else has or comes from money.

Turns out Leigh is pregnant and her wealthy boyfriend Jimmy (Brian J. Sanchez), does not know about last night.

Davis rooms with best friend Cooper (Buchanan Jackson Highhouse) and both are nursing vicious hangover. Davis has no memory of the events, but news gets out when Rugby teammate and video-game obsessed Johnson (Jackson Dockery) and Cooper spill the beans.

Jimmy angrily confronts Leigh, but she tells him that she was raped and because of this lost the baby. The scandal threatening to destroy Davis’ life.

When Leigh’s sister Haley (Courtney Sumlin) hears she sees an opportunity to cash onto what Leigh has gotten.

This group together is really really special, with Ms. Sumlin and Mr. Oicle really shinning.

I have always loved this play and Mr. Colaizzo’s words that seem to jump off the page with a realism that dares you to look at them. Meghan Mulcahy and Reilly Johnson have taken that a step further in their direction and the result is satisfying theatre.

I hope that this group will do what Bedlam did before them and stick together, form a company and keep on working together.