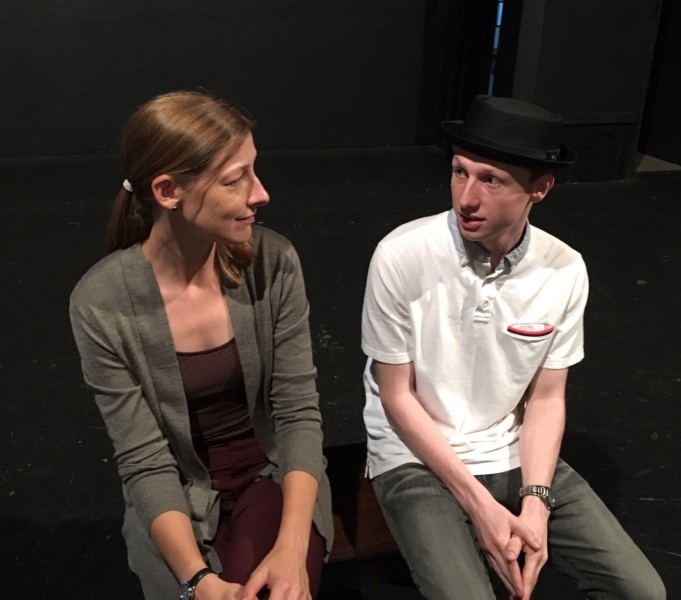 “I’m frightened, Richard. I dream that people are talking about me on television. Then I wake up and realize they are. Some of my colleagues have sent me articles that have appeared on the internet. At the end of those articles are comments by readers. The hatred. If I were a woman living in the Thirteenth Century, I’m sure they’d burn me. I’ve always wondered how human beings could hunt down and burn another human being. Now I know. They’re the same people.” Dragons in the Crease

Where are the lines drawn between the rights of one and the rights of many? In Dragons in the Crease, Jeffrey Lowry (Brennan Tracy), a student at a small junior college is asked to write down his questions by Evelyn Whitehead (Dara Lewis) his poetry professor. She asks him in the form of a letter due to his severe stutter and amount of questions. Jeffrey takes to the internet, but his father (Brian Rock) sees this as disabilities fighting for their rights and calls his friend (Andre DeSandies) at the New York Times. The story becomes the front page news.

“Right? Right? What do you know about what’s right? You live in a world where there’s no room for anyone except you. You talk about reaching out your hand, but you’ve never reached out your hand to anybody. You cast yourself as some sort of heroine but you’re really just sad woman who can’t see beyond her own needs.” Dragons in the Crease

As the past is brought out, Evelyn 10 years prior wrote love poems to her student and again acted inappropriately. In the end Evelyn loses her career as a teacher and doing what she loves. The title Dragons in the Crease, is drawn from an Emily Dickinson poem, points to the desire – but ultimate failure – to achieve love and human connection.

The cast does well, but I long to see seasoned professionals take this script to the next level. Mr. Tracy, manages to bring a truth to his character that is refreshing.

Mark Spina’s direction keeps the action on point and enhanced the storyline.

Joseph Vitale’s script is poignant, giving a voice to both the student with a disability and the longing to be set free and the teacher, who sees the world though warped glasses of her own choosing. There is a painful truth in these flawed individuals. I look forward to seeing another production of this and more work by this talented writer.

Dragons in the Crease is loosely based on real-life incident, and shows how social media turns us into instant heroes and villains.