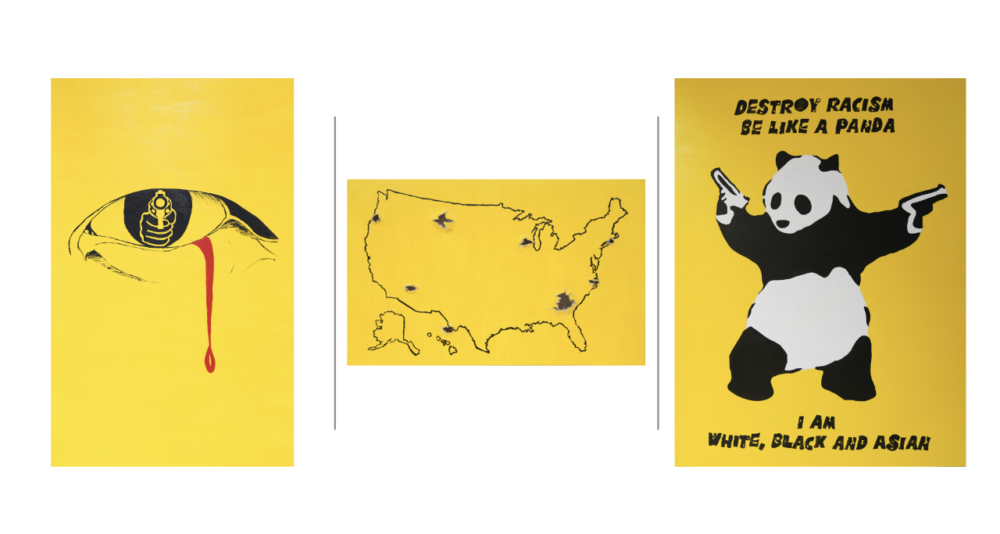 Carlton Fine Arts Ltd. is pleased to present a new exhibition of works by conceptual Chinese artist, Linjie Deng, titled Asian Art SPA, due to popular demand after his “Lost Museum“ exhibition nearly sold out. The works will be showcased alongside a curated set of works by Keith Haring, Marc Chagall, Andy Warhol, Roy Lichtenstein and Mr. Brainwash.  Asian Art SPA will be on display beginning Monday, March 29 through May 24 at Carlton Fine Arts Ltd. location at 543 Madison Avenue, New York, NY 10022.

Asian Art SPA features different works, which Deng created after he was attacked at a New York subway station at 86th street. His attacker referred to him as f**king yellow while violently shoving him to the ground. Reclaiming the Asian slur, Deng has created three works that are all yellow, paying respect to the pain the Asian community has felt during this time. These pieces include I am White, Black and Asian, in which a panda is depicted holding two guns; I don’t like the way he looked at me either, and 8 Deadly Shots. The proceeds from these works will be donated to Think!Chinatown, a non-profit whose mission is to foster inter-generational community through neighborhood engagement, storytelling & the arts.

Deng will also feature other works including works from his Yin-Yang Series, a selection of contemporary calligraphy works consisting of a set of mutually opposing and coexisting words: freedom and hope, you and me, me and we, proud and humble. These reflect the different reactions and perspectives of Eastern and Western cultures throughout the last year.

The Teeth Falling Out series will also be spotlighted with works including The Tooth, Water, Sunshine, Soil, and Leaves. Deng has chosen five basic elements of life and painted them individually, aiming to magnify the small and potentially invisible visual characteristics of each. After spending time painting these, Deng feels connected to them, not just physically but spiritually.  He was able to respect their value and to not treat them as inconsequential, which is what he hopes his audience will feel.

Linjie Deng’s “Asian Art SPA” exhibition will be on display with all works available for purchase at Carlton Fine Arts Ltd. 543 Madison Ave, New York, NY 10022 location. Exhibition hours are Mondays – Thursdays: 10 AM – 6 PM; Fridays: 10 AM – 4 PM; Saturdays: Closed; Sundays: 11 AM – 6 PM and by appointment. For those interested in checking out the exhibition outside of open hours, appointments can be scheduled by calling 212-593-2800 or email: info@carltonfa.com. Visit http://carltonfa.com/, for more information.

Linjie Deng is a multi-talented conceptual artist in New York City. The 28-year-old artist moved to NYC in 2015 after graduating from art college in Beijing, then received his MFA degree from the School of Visual Arts in New York. Multimedia art, such as ink art, participatory art and performance art have always been a passion and hobby in Deng’s life. He started studying Chinese ink art and calligraphy at six years old. Now, his artwork has also migrated to a space within digital media and video. He also experiments with new media art from a Conceptualist position. Deng’s works have been shown in China, the Museum of Chinese in America, The Hamptons Virtual Art Fair, and have been featured by The United Nations. https://www.linjiedeng.com/  | Instagram: @Linjie_deng