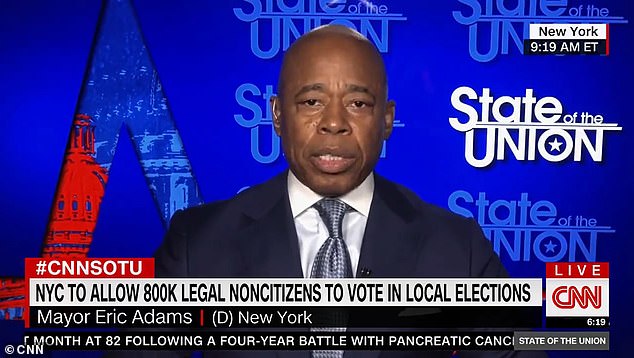 They don’t pay taxes, they came here illegally and they want to change our country, but that doesn’t matter to NYC’s new Mayor Eric Adams. Opponents are willing to challenge this new law, which the City Council approved a month ago, but unless a judge halts its implementation, New York City is the first major U.S. city to grant widespread municipal voting rights to non-citizens.

Adams defended himself Sunday against criticism from members of his own party claiming that he did not support the legislation. Then stated to CNN’s Jake Tapper on the State of the Union program. “I supported the concept of the bill. In New York City, just Brooklyn, for example – 47 per cent of Brooklynites speak a language other than English at home when I was the borough president, And so I think it’s imperative that people who are in a local municipality have the right to decide who’s going to govern them. And I support the overall concept of that bill.”

Under the new law, non-citizens still won’t be able to vote for president or members of Congress in federal races, or in the state elections that pick the governor, judges and legislators.

Non-citizens who have been lawful permanent residents of the city for at least 30 days, as well as those authorized to work in the U.S., including ‘Dreamers,’ to help select the city’s mayor, city council members, borough presidents, comptroller and public advocate.

The first elections in which non-citizens will be allowed to vote are in 2023.

What made immigrants in the past so valuable was that they longed to be here, speak our language and legally be a part of this country. I guess now none of that matters.