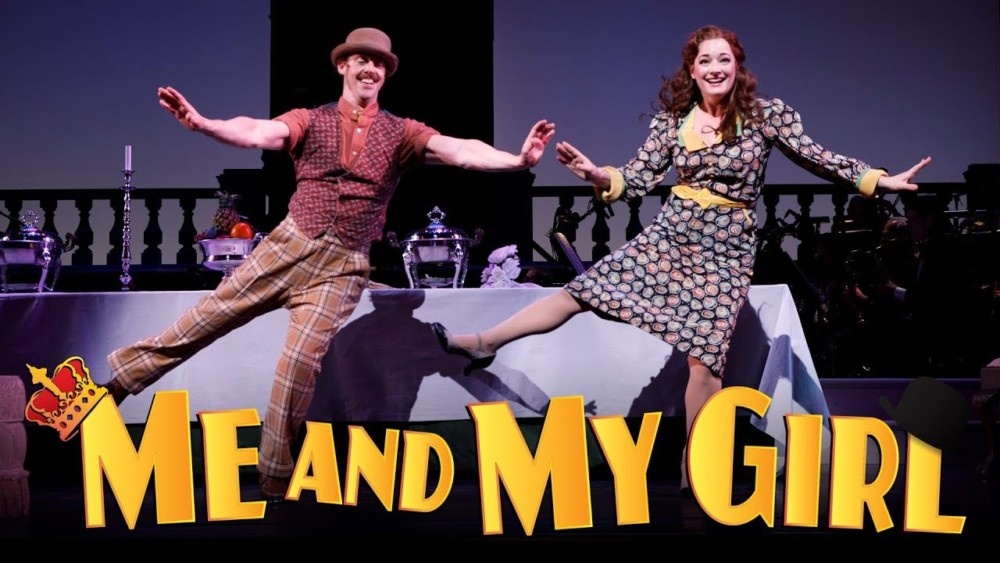 Encores! at 25 tap dances in the often revised Me and My Girl, a 1930’s musical that originally opened at the Victoria Palace Theatre in the West End in 1937. It was created as a fresh new vehicle for Lupino Lane, it’s star, and still holds all the charm of a fun vaudevillian influenced piece of musical theatre. Initially the reaction in London was luke-warm until it got a much needed boost from a live broadcast on the BBC of a matinee performance of the show in place of a sports event that had just been cancelled.  After that exposure, it was a rousing success, running for an impressive 1,646 performances and becoming a darling of the stage.  It’s no surprise, it’s a jovial and light hearted affair, full of puns and guffaws, surrounded by some charming little songs and a great deal of showy dance numbers.  The plot is light and slightly ridiculous, but such fun that it has been revived often on Broadway and in the West End usually to strong ticket sales and a healthy run. As directed and choreographed by Warren Carlyle (Broadway’s After Midnight) for the New York City Center Encores! at 25 series, the piece shows some awkward construction and that thin plot, but as a whole, it rises to the occasion in terms of enjoyment levels giving the stellar crew a great deal to chew and tap upon. What fun they all have taking a big juicy bite out of Me and My Girl.

With music by Noel Gay and an original book and lyrics by Douglas Furber and L. Arthur Rose, this fun little diddy of a show tells the story of an unapologetically unrefined cockney bloke by the name of Bill Snibson, played by the very endearing Christian Borle (Broadway’s Falsettos) who learns much to his surprise, that he is the 14th heir to the Earl of Hareford. He’s not the most believable low class guy, as his cockney feels as authentic as his Something Rotten! Shakespeare, which I will add is as hilarious as it aught to be. At first quite thrilled, he informs his lady love, the feisty darling Sally Smith, played with never ending charm by the delightful Laura Michelle Kelly (Broadway’s Finding Neverland) of his newly found riches and they give us a delightful rendition of the title song, “Me and My Girl” twirling up over and beyond the banquet table. But there is one catch, described with very little detail in the ridiculously enjoyable diddy, “The Family Solicitor” by the delightfully interrupted Don Stephenson (Broadway’s The Producers). Billy, you see, must convince the Duchess of Dene, played with a comic delight by the always dependable and uproarious Harriet Harris (Broadway’s Cinderella, Public’s The Low Road) that he is worthy of the regal title.

The three, joined by the all over the map portrayal by Chuck Cooper (Broadway’s The Life), as the difficult then sweet, but then very drunk charmer, Sir John Tremayne, are infectious as they bounce around the grand estate in Hampshire, Mayfair, and the shabbier Lambeth. The set by Allen Mayer (Encores!: Hey, Look Me Over) is functional without being too much one way or the other, with the costumes by Emilio Sosa (Broadway’s On Your Feet!) doing the trick with the upper class, but failing to register with the Lambeth folk. Leading up to an ending that was, as stated by the confident and unwavering Bill, pretty much determined from the beginning, it’s no surprise where all the roads lead in this romp. With the thoroughly enjoyable song and dance numbers, like the perfect Act One finisher, “The Lambeth Walk“, all just had to turn out well in the end.  There was no other option.

The cast is large and having a great time. As always, it is truly amazing what these professionals can put together in such a short time.  The music is gloriously led by music director, Rob Bergman (Broadway’s Bright Star, Tuck Everlasting) and music coordinator Seymour Red Press (Broadway’s Hello, Dolly!) giving is that grand and large sound that The Encores! Orchestra is known for. The dance numbers are extraordinary, tapping and swinging across the stage with orchestrated abandonment, especially the Act Two opener, “The Sun Has Got His Hat On“. Performed with a hijacked fever by the goofy and handsome Mark Evans (Broadway’s The Play That Goes Wrong), it literally goes as right as rain, coming out of nowhere with pretty much nothing to do with moving the plot forward, but it sure is some pretty gay fun, and I mean that word in every lovely sense imaginable. Another dance number that has something to do with cricket, reminded me of the finale in the Mel Brooks film, “Blazing Saddles” when the cowboy fight manages to cascade beyond their soundstage into another Top Hat-style musical being filmed.  All of a sudden, we are witnessing a festive and energetic number surrounded by an awkward plot moment, without any need in the story. I’m not sure who’s idea this was, but like much in this musical, the starts and stops are from a different planet and puzzling at best.  Don’t ask me why, but before we can get too involved, it quickly disappears and we return to the main story, as thin as it is.

I’m not sure if it is the flimsy and vaudevillian book (there is a perplexing credit in the program, proclaiming Concert Adaptation by John Weidman) or a directorial choice by Carlyle, but numerous times the entrances and the exits of characters feel random and confusing.  Kelly is sweetly performing a gorgeous ballad, “Once You Lose Your Heart” to her new sort-of out-of-thin-air BFF, Sir John at the pub down the road (when did they become such friends?), and in the middle of her lovely singing everyone in the scene just leaves…. including Sir John. They just walk off stage. No logical reason why that happened or if it was necessary, but it happens and it wasn’t the first time. I can only imagine that it was a directorial choice, but one that left me scratching my head. Scenes end abruptly, and people leave mid scene, but maybe that’s what this class of people do.  It does ring true for the snobby pair of young money hungry lovers, played with a perfect edge of nonchalance and handsome rich charm by Evans and Lisa O’Hare (Broadway’s A Gentleman’s Guide…) as Lady Jaqueline Carstone and the Hon. Gerald Bolingbroke, making their position perfectly and enjoyably clear with one of the first deliciously smart numbers, “Thinking of No One But Me“. The two have a classy blast, embracing a love that is completely based on Pounds and Dollars, not Love and romance. O’Hare is utterly fantastic playing the gold digger in a way that we can’t help but enjoy, even when she does battle with the heart and soul of this fizzy little musical, Kelly’s Sally. The stakes aren’t high as we know the ending will turn out well for all, but I am thankful it didn’t end with a triple wedding dress parade like so many other old British writers like to do ( yes, I’m talking to you Mr. Shakespeare, but not the Borle one). The delicious naughtiness of Me and My Girl happily doesn’t need to go there. It’s found it’s fun in Borle, Kelly, Harris et al.