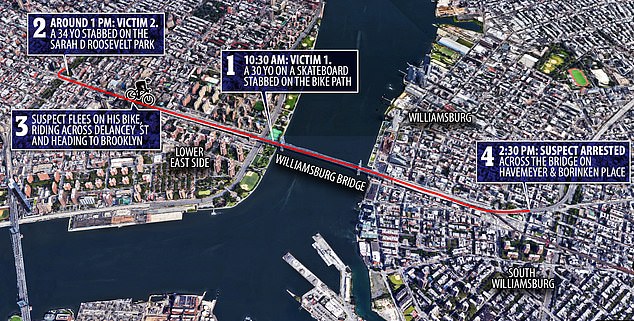 Another weekend, another crime wave. Omar Cartagena, 44, decided to go on a killing spree.

First was a skateboarder who he stabbed in the chest on Williamsburg Bridge, leaving that him in critically condition.

Three hours later he headed to Sarah D. Roosevelt Park on Lower East Side, where he sat down next to Abu Sala Miah, 51 a GrubHub cyclist who he knifed to death. Tired from work Miah stopped for a rest. Wanting his bike, Cartagena allegedly knifed him in the face and stomach. As the he rode off, Miah tried to chase after him. Miah was sent to Bellevue Hospital where he bled out and died.

Miah had been working as a GrubHub deliverer to send money back to his wife, 20-year-old daughter and 11-year-old son in Bangladesh, where he emigrated two years ago due to political prosecution.

Miah had borrowed money from a friend to buy the e-bike.

Approximately 12 hours later another victim, who was 34, was stabbed at the same park as Miah and was left in a critical condition by a knife-wielding bicyclist.

Cartagena has been arrested, but I will bet a million dollars he is part of de Blasio get out of jail free program that is leaving New York a killers playground.

Stephen SorokoffNovember 15, 2021
Read More
Scroll for more
Tap
My View: Barbra Streisand Opens In Miami Beach…”Hello Gorgeous” Exhibition
We Are About To Fund Our Own Demise