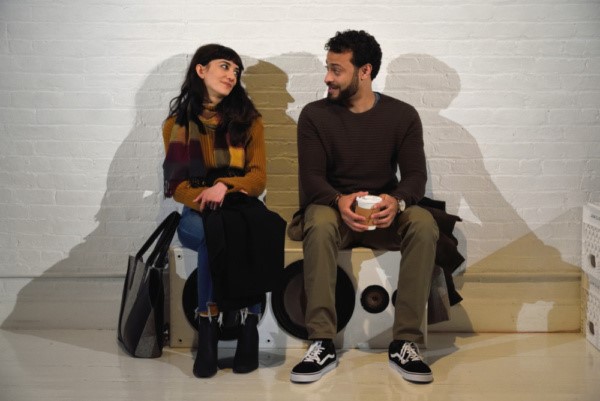 Theaterlab presents Blockchain Theater Project’s production of Nylon, written by Sofia Alvarez and directed by Knud Adams. The stakes are constantly rising in this modern-day story of emotional twists and turns.

Nylon plays on various clichés to tell the story of Anna (Sheila Vand) and Matthew (Cesar J Rosado), who meet four years after their relationship was pushed apart by tragedy. As their past rises to the surface, they test each other by talking about decisions they weren’t able to make before. When they each set their ideal life in motion, they interfere with each other dramatically.

The first act is flawless both on the page and in production. Sofia Alvarez gives Anna and Matthew every symptom of two people who know each other so well that they can push each other’s buttons and pick at each other’s wounds without blinking an eye. Sheila Vand and Cesar J. Rosado display the brutal honesty of such a relationship with chemistry that could light the room on fire. Anna and Matthew’s relationship is honest and changes at a realistic pace, while director Knud Adams moves them in space to reflect their emotional state at all times.

Act two is completely different: it is a machine gun of varied locations, new information and high stakes that get unnecessarily higher. The realistic pace is dropped completely as the audience is bounced from place to place, scene to scene to witness the repercussions of the actions propelled by the conversation of act one.

The primary joy of act two is watching Claire Siebers play Gigi, a candid and simple woman who is determined to make the best of a situation she didn’t create. Ms. Siebers’ delivery and timing are the comedic heart of the production. Maggie Bofill as Marisol, a grieving caregiver and Brian Miskell as Colin, Anna’s subtly manipulative husband, demonstrate their enjoyable talents as well. Their abilities make act two much easier to swallow.

Kate McGee’s lighting design is limited by the space, yet her design offers clear transitions and provides unique looks for each scene of the play. Scenic designer Andrew Moerdyk uses the white theater space to his advantage by making every large set piece white, forcing every bit of color in the costumes (by Clara Fath) and props to stand out.

Ms. Alvarez creates complicated yet realistic relationships between characters who are determined to do the right thing, or to leave destruction in their wake. While act two is a challenge, it is certainly worth keeping an eye on Nylon.