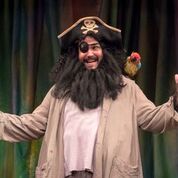 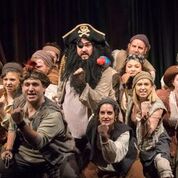 Jimmy Kieffer and crew of the Five O’Clock Shadow

At the performance I was at of Backbeard: The Musical, a child no more than four couldn’t wait to meet the girl pirate Scarlet (Taylor Hoffmam). She completely related to her. This seriously adorable and well staged musical captivatated the children and the adults in the audience. and took us on their journey. Inspired by the children’s book series of the same title by Matthew McElligot, Backbeard (Jimmy Kieffer), is the hairiest pirate who ever lived. On his birthday his crew states he must follow the pirate rule book and get new clothes since his are torn and showing way too much pirate underwear. Backbeard heads to town, where the tailors create for Backbeard an outrageously  colorful new outfit complete with pig instead of parrot. Enamored of his new clothes, Backbeard faces his biggest challenge, to be himself or cave in to the pirate handbook. An older women in town (Carol Charniga) who owns a tea shop teaches him the value of standing up for himself in “Suits Me To A T.” Now Blackbeard has to win the pirate council, his crew and the towns acceptance. Though Backbeard can pillage and plunder he learns no-one wants to hire a dirty, smelly ex-pirate. Backbeard learns that standing up for yourself has it’s pitfalls, but in the end “It’sWas Good To Be Me.” 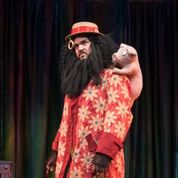 Jimmy Kieffer is heartwarming as the oversized pirate whose feelings he wears on his sleeve. He’s gruff and tough, but deep down inside he is beloved for his kindness to his crew. The 15 students and alumni from Sage College have strong vocals and did something that after last night I am in praise of, they danced in sync. This was a well oiled machine. The two taylors (Nick Martiniano and Ed Knight) have a moment in “Clothes Make The Man.” Bravo to Michael Musial who directs with aplomb. The choreography by Michael Whitney was performed with precision and gusto. Impressive when a cast is this large.

The book by Matthew McElligott, Larry Tuxbury, Brian Sheldon, and Michael Musial, incorporates things kids love such as fighting and all those bodily functions that thrill and excite. The language relatable and kept a theatre full of kids entertained and tuned in for over 70-minutes. The music (also Musial) is tuneful, touching and uplifting and you leave the theatre sining  “By the Book.”

Backbeard production values are also first class. The mired of costumes by Lynn Roblin are fanciful and well done. The set by Richard Finkelstein which reminded me of The Fantasticks, was simple, effective and imaginative. The lighting by Nick Solyom enhanced the over all picture.