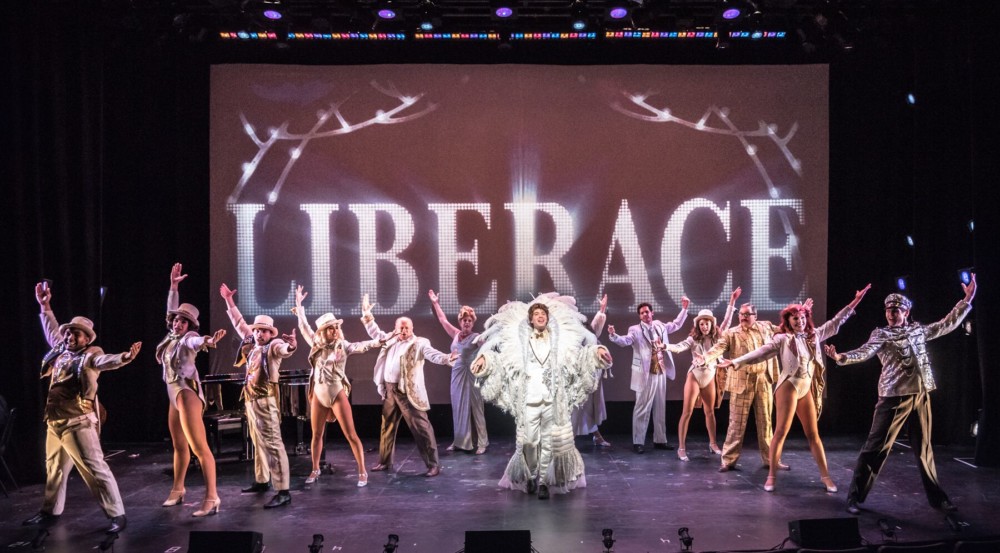 NYMF: Ben, Virginia and Me Taking Poetic License With History

NYMF: Ben, Virginia and Me Taking Poetic License With History 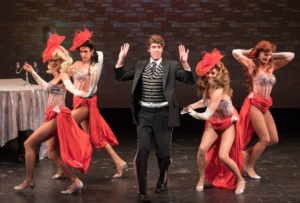 Samuel Floyd with the Ensemble Photo by Russ Rowland

There a lot of wonderful components to Ben, Virginia and Me: The Liberace Musical, unfortunately the book by Roger O. Hirson (Tony Nominee for Pippin) is all over the place and this musical doesn’t exactly know what it is. 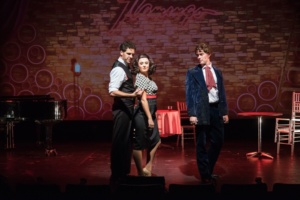 Narrated by Cassandra aka William Conno (Joel Blum), we start at the The Flamingo Hotel 1946, then segway back to 1930 and go on a time line until Liberace (Samuel Floyd) meets Ben Siegel (Eric Briarley) and Virginia Hill (Haley Hannah) at the Stork Club in New York, then to Las Vegas and his playing and meeting Sophie Tucker (Janet Aldridge). He meets and starts an affair with Rock Hudson (Alex Nordin), but the two have a hard time getting together due to Lee’s heavy schedule, thanks to his manager (Buzz Roddy). By the second act, there is the ménage à trois between Ben, Virginia and Liberace, until Siegel is shot. Then off to London and the tone of the show switches. 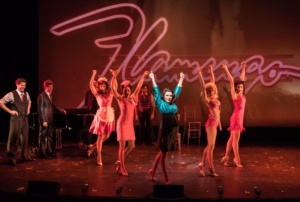 Haley Hannah and the ensemble Photo by Russ Rowland

The problem here is Liberace met Bugsy Siegel once in 1947. He was playing the Hotel Last Frontier in Vegas in a return engagement, he was approached by Bugsy Siegel to play the Flamingo Hotel. He offered to double Liberace’s salary, but Liberace did not want to play the room and two weeks later Bugsy was killed. Liberace never played The Flamingo. Jimmy Durante opened The Flamingo in 1946. Though Sophie Tucker played Vegas, she stopped playing Vegas in 1944, before Liberace got there and long before The Flamingo Hotel opened in 1946. If Virginia Hill and Liberace were friends, why is there no hint of it? Also if Liberace had an affair with Rock Hudson, I wouldn’t be shocked, except at the time Rock Hudson was twenty and didn’t come west until 1946 and was with Hollywood agent Henry Willson. Also at the time Vegas was a hole in the wall and it wasn’t lit up in neon, so songs like “My Lovely Virginia,” “Ben’s Sollioquy” and “Palace Out of Sand” with the back drop of all these hotels is mind boggling. If this is a Liberace fantasy or a what if, I get it, but lead me there. Also start the show about Ben’s life and weave the three lives together.

In the second act we are focused on Lee’s sexuality and the guilt he feels. Now this easily could be the musical, but in the first act we need to see the lead up. 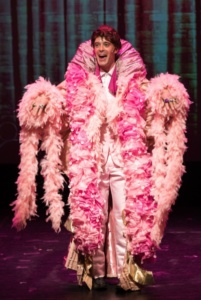 There is also the story of Liberace, his story, his musical. 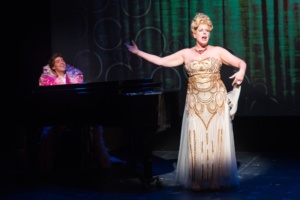 Mr. Floyd captures Lee’s laugh and movements and had us feeling for him. Ms. Hannah makes a tough Virginia, with a heart of gold, but why she was in a brown wig is beyond me, considering she was a red head. Mr. Briarley wasn’t as tough or as threatening as Ben, but he sang well. Ms. Aldrich was a better Sophie than mother to Lee and sold the song”The Yellow Canary Diamond.”Mr. Blum’s role needs to be more fleshed out or an older Liberace needs to narrate. Mr. Roddy brought down the house with “Representation.” The ensemble is another story, either they were under rehearsed or Paul A. Stancato (National Tours: Flashdance, The Lion King, The Wedding Singer) director and choreographer, did not notice their movements were not in sync. The tap number “A Thousand Watt Light” was a show stopper. 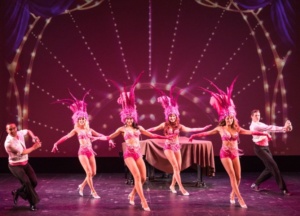 The ensemble Photo by Russ Rowland

The music and lyrics by Barbara Carole Sickmen work well on the uptempo’s, but the ballads all blend in together. 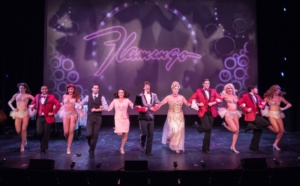 The cast of Ben, Virginia and Me Photo by Russ Rowland

The costumes by Kurt Alger are badly fitted and sewn, but the projection design by Kevan Loney was fabulous minus the bizarre hotels, that were not even in exsistance.

I may sound overly critical on this show, but a show about Liberace could be wonderful. Lee was a great guy and I know because I knew him personally. My dad use to drag my family to Las Vegas and Palm Springs and It was Lee who made it bearable. I think if this team goes back to the drawing board and really set it’s mind on telling his story, they would have a winner. Until then Lee will have to live on in our memories. 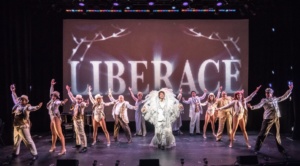 Samuel Floyd as Liberace with the Ensemble Photo by Russ Rowland