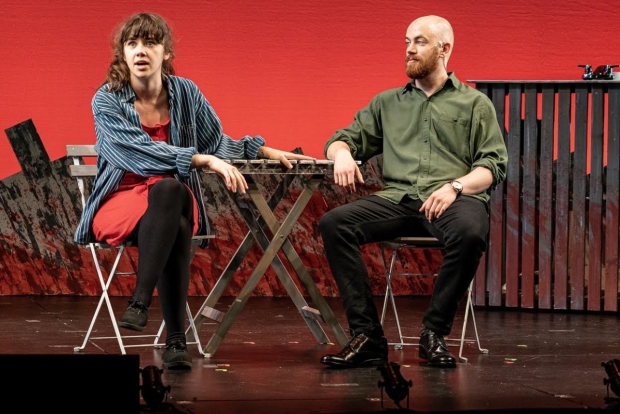 With a score that is infectious, a terrific cast and a story that will remind you of The Last Five Years, Bonnie and Clyde, and Sweeney Todd, combined Buried hits NYMF straight from the Edinburgh Fringe 2018.

Buried follows Rose (Lindsay Manion) and Harry (Sebastian Belli), two psychopathic serial killers, who meet and fall in love, after they try and kill each other, Rose by poison and Harry with a knife. Murder and their dark desires bind the couple, as we hear of their pasts, that lead them to this place. As they go on a killing spree, the two fall in love. Afraid to commit they break up but getting caught eventually brings them ultimately together.

In the meantime there is a running commentary by two TV personalities on serial killers and our obsession with them played by Wilf Walsworth and Laurence Hunt. Hunt almost walks away with the show, for his 5 minute TV impressions. This is one fabulous comedic actor.

Manion and Belli have impressive vocals and a chemistry that makes us care for them. The four ensemble members Niamh Finan, Laurence Hunt, Wilf Walsworth, and Rebecca Yau each get their chance to stand out.

Tom Williams book, lyrics and direction and keep the show moving, humorous and well played. Cordelia O’Driscoll, music and lyrics are folksy, with hints of Jason Robert Brown thrown in. You will find yourself humming these tunes after the show is done. I look forward to what they do next. Their new show “You and I” opens in the Edinburgh Fringe 2019 in a few weeks.

Buried will capture your interest, but you will find yourself wondering how you can care for these two very flawed individuals. The show has the same problem as Assassins, Murder Ballad, Silence: The Musical, Sweeney Todd and even Bonnie and Clyde, who is its audience? The answer is though I love dark shows, this audience is limited.

Suzanna BowlingFebruary 23, 2021
Read More
Scroll for more
Tap
NYMF: Ladyship and The Show Must Go On
The Shed and Dragon Spring Phoenix Rise A Hot Mess