NYMF: Errol and Fidel Too Many Hands Spoil the Plot

NYMF: Errol and Fidel Too Many Hands Spoil the Plot 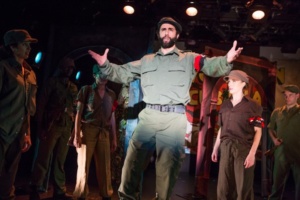 Tis the season, for new musicals to burst onto the scene and discover those new hidden talents. First up is a venture into NYMF called Errol and Fidel, with book by Boyd Anderson and Guy Anderson, music by Peter Kaldor, John Kaldor and Doug Oberhammer, and lyrics by Boyd Anderson. This true relationship between the iconic movie star and Cuba’s numero uno rebel, at the height of the Cuban revolution has possibilities, but needs some major work. 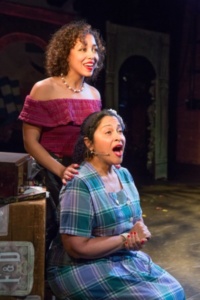 We arrive in Cuba, circa 1958, as an older woman (the delightful Sydia Cedeno) tells us the story of a “La Cucaracha” and a chicken. She cajoles us to discover who is really calling the shots. We move to the set of a B rated movie where Errol Flynn (Jonathan Stewart) the dashing star of Hollywood, is no longer bankable. He yearns to have one last adventure and become a real hero. As he begs his agent (Cole Grissom) for the chance, enter an upstart named Fidel Castro (The fabulous George Psomas), by way of Lola (Claire Saunders) a mysterious woman, with an agenda. The CIA (Alan M-L Wager and Ryan Walsh) are involved, as the revolution for freedom is about to go full throttle. 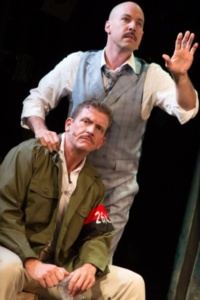 Part of the problem with this show is, Errol Flynn needs to be sexy, charismatic and swashbucklingly charming. Think in Peter O’Toole in My Favorite Year. He needs to be the perfect match for the ruggedly handsome, egotistical Fidel, played to perfection by George Psomas. It doesn’t help that Mr. Flynn’s songs are the most unappealable in show. Though Mr. Stewart is talented, he just lacks spark. Thankfully Claire Saunders makes up for that in spades. Sydia Cedeno, Alan M-L Wager and Ryan Walsh all have moments to shine and do. 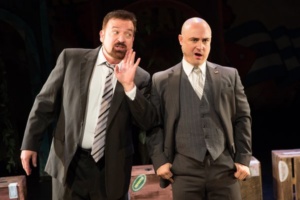 Michael Bello’s direction keeps the show moving, but the book drags and has one two many convoluted moments. Justin Boccitto ‘s choreography is energetic. It is clear that Mr. Boccitto and which ever composer wrote the CIA songs, were fans of Catch Me If You Can, especially “Don’t Break The Rules.” 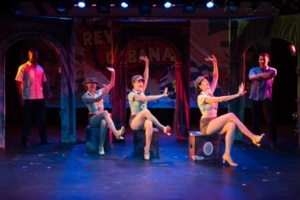 The music is by three different composers and it shows, as there are different styles that do not mesh. What succeeds is the Havana sound which is hot, steamy and bankable. No matter how good the music is, what fails completely is the lyrics by Boyd Anderson. They are crammed into musical spaces, making me think the music was written first. The rhyming scheme is also off, with Jackio and Bragadosio as one of the couplets. What is fabulous is the music direction, arrangements & orchestrations by Doug Oberhamer. 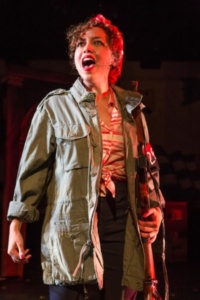 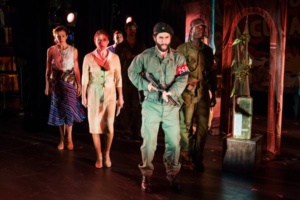 This is a show with possibilities, but they need to go back to the drawing board and make sure the book and lyrics are coherent, then add the music.  It was nice to discover Mr. Psomas who is now on my radar.