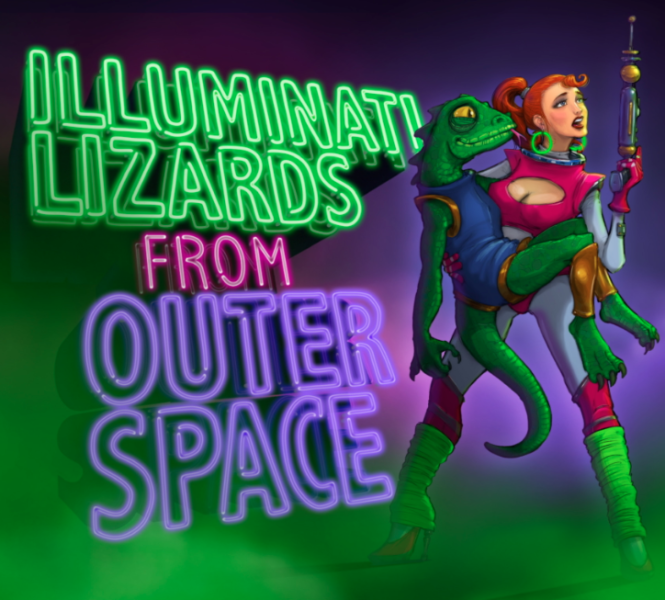 I don’t know if conspiracy theory fans will rejoice as the incomprehensibly musical, Illuminati Lizards from Outer Space, riffs off the insane but remarkably popular premise that we have been invaded by lizards who have changed shape to resemble humans. The authors, Paul Western-Pittard (book, music and lyrics) and Yuri Worontschack (music and lyrics) clearly hoped this show would be as campy and fun as The Rocky Horror Picture Show.  Instead the show is confused, unfunny, noisy nonsense and I wonder what kind of Kool-Aide this team must have been drinking.

In a peppy opening number, the transformed lizard people in white jumpsuits and human form sing, seemingly endlessly, that they are the  “Luminati Lizards from Outer Space.”  Then, we are abruptly told that they only have two days left to accomplish their “mission,” which seemed to be to extract their deep cover agents and return home.  It became clear later that they have all but failed in their actual mission, which was to populate the planet with lizard people. Their Supreme Leader is about to vaporize them, and our planet, along with it, as punishment. That’s why they have to collect their operatives and leave quickly.  You may figure all that out about an hour into the show, if you’re lucky.

We meet  Tina, (statuesque and lovely Dani Spieler), at the Miss World Beauty Pageant, who is disqualified after winning because she represented that she was from the U.S. when, in fact, she was from Canada. Therefore, she is declared by the judges to be an “illegal alien.” The otherwise intelligent lizard people mistake her for one of their own, and set out to bring her back home with them. Why they continue to believe this when she never acknowledges her lizardness to them is left unexplained.

When one of the lizard men masquerades as a lawyer to get Tina out of a possible jail sentence for being an illegal alien, he takes her back  to the faux spiritual center the lizards have set up as a cover in their disguised spaceship which sits smack dab in the middle of New York City, going unnoticed.

What then follows is harder to track than an out of control asteroid.  The Male Muse (Edward French), a horny lizard man who sports two penises, attempts to seduce Tina and fails to understand her lack of interest.  Klaus, the reptile doctor (Tom Deckman, who could make the phone book funny),  gives Tina strange suppositories to alter her behavior; but exactly how or why isn’t clear, either. Another female in the group, Raquel (Daisy Hobbs), has a problem about Tina which I can’t even recall why. Tina also doesn’t understand or particularly worry why Guy (Joshua Hobbs) suddenly turns into a lizard under the sun lamp. Celia Mei Rubin gets off easy as a supporting lizard person, with not much to do. All this pointless lizard business is under the control of their grand Overlord, Emily Cramer.  Ms. Cramer has a light, wacky touch and full out commitment to this lunacy which almost made it bearable.

As the hapless Tina, Dani Spieler tries to rise above the pageant bimbo stereotype. But had she been more breathless and clueless in a traditional way, it would have been much funnier, and I might have believed that she didn’t get what was going on around her.

The one truly bright, shining light in this bad acid trip of a show was the character of the Janitor, played with scene chewing glee, manic energy and a glorious tenor voice by Brian Charles Rooney. The Janitor tries to help Tina escape, but really has a darker, personal motive: to rule the universe!

There were a couple of political jokes thrown in which tried to create a contemporary satirical context for this random wannabe comedy. But they were too little and too late.

I can’t remember any of the score, under the serviceable musical direction of Luke Williams, except for the mind-melting repetition of the opening number.

Choreographer Katherine Roarty and director Joey Murray keep all the spaceballs in orbit.

Apart from Mr. Rooney, the only other truly entertaining elements in this show were the brilliant animated projections of the flying saucer and the Reptile Leader by Lisa Renkel and Wayne Bryant.  The energetic choreography of the opening number in particular was by Katherine Roarty.

I can see how some of this might have been funny to a group of friends getting high in a living room somewhere. The Drowsy Chaparone started that way and look what it accomplished. I would have to be kidnapped by aliens to believe that this show could ever become cultish or otherwise.

I hear that the reading last year, which obviously left more to the imagination, was actually more fun. But I would have to be kidnapped by aliens myself before I’d ever believe that this show could develop a following, cultish or otherwise.

Suzanna BowlingJanuary 24, 2023
Read More
Scroll for more
Tap
Frances Ruffelle is Like Fine Wine She Just Keeps Getting Better
Life Sucks, But Does This Play?