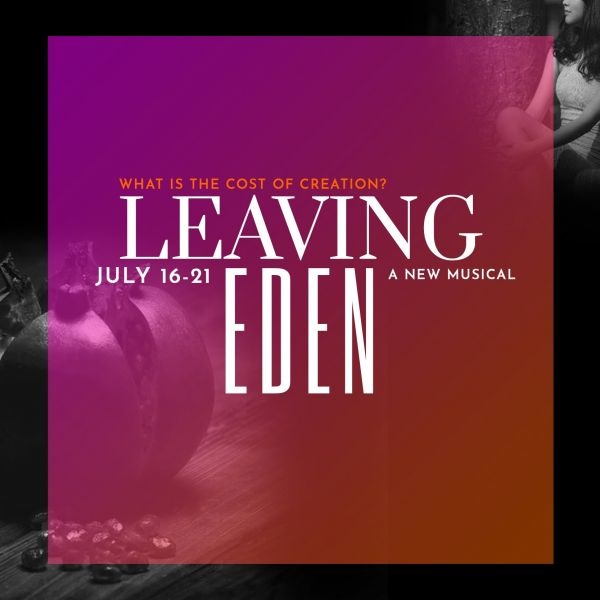 Lilith, is said to have been the first woman created by God at the same time he created Adam. When making love Lilith demanded that Adam let her be on top as well as on the bottom, but Adam refused. Lilith wanted equal share, Adam did not. Lilith was banished from Eden and rejected by God and Adam after she would not obey the commands of Adam.

In Jennifer Waxman’s new musical Leaving Eden, now playing at NYMF Lilith (Sarah-Anne Martinez), Adam (Ian Ward) and Eve (Gabrielle McClinton) play out there ancient tale, paired alongside a trio of their modern counterparts. This time a couple, Modern Adam (Azudi Onyejekwe) and Modern Lilith (Lily)(Janet Krupin), and their friend Eve (Ms. McClinton). Lily has lost her child and now cannot have one. She hopes to form a ménage à trois in the hopes of conceiving a child through Eve.

Ben Page and Ms Waxman are credited for doing the book, music and lyrics. The music, which also has additional music by Ada Westfall is infectious and interesting, bordering on a pop score. With their terrific cast, who vocally and dramatically hits this out of the park, this score soars. The lyrics are point on, but every now and then they hit missed accents. The orchestrations by Ben’s brother Isaac, flush out the score making you want to dance or at least move to the beat.

The show is also well written, but I have to question some of the direction by Susanna Wolk or the book and I am not sure which?

When we first meet Modern Adam, Lily and Eve, they seem like they are in a three way relationship and it is confusing. Then we find out later on that’s not the case. These relationships need to be well defined in the beginning. I would assume that Lily swings both ways and though she is in a relationship with Adam, she has been in one with Eve. But again this makes no sense as Adam would know and later on during “Stripped Bare,” this wouldn’t be such a problem.

During the “ménage à song” modern and ancient Adam relate to each other….how? When Lilith is cast out of Eden and Eve arrives, how did the modern Eve become the ancient Eve? Maybe there needs to be a song about reincarnation in the beginning or about past lives running into present ones.

Another troubling part of Leaving Eden, has Lilith jealous tempting Eve with the apple and getting her to see both Adam and God as flawed. I left this show seeing its potential, but also seeing the female race as always losing the battle. Lilith and Eve are smart, curious, created by God and yet betrayed by Adam, God and themselves. Adam couldn’t handle not being in charge, God it seems had no reason other than women expanding on his creation and by themselves over rivalry.

When Eve, Lilith and Lily sing “Perfect Women,” I can see women everywhere cheering along. This is the year of the woman and Leaving Eden has a lot of potential. I look forward to seeing it in it’s next incarnation. In the meantime, I recommend seeing Leaving Eden now.